Brandon Shuster and Lauren Sale have created history for Samoa being the first swimmers to win gold medals in the Pacific Games.

The national reps won back to back in the 200 meters men’s and women’s backstroke finals on Tuesday night, with loud cheers from a packed Aquatic Center at Faleata. 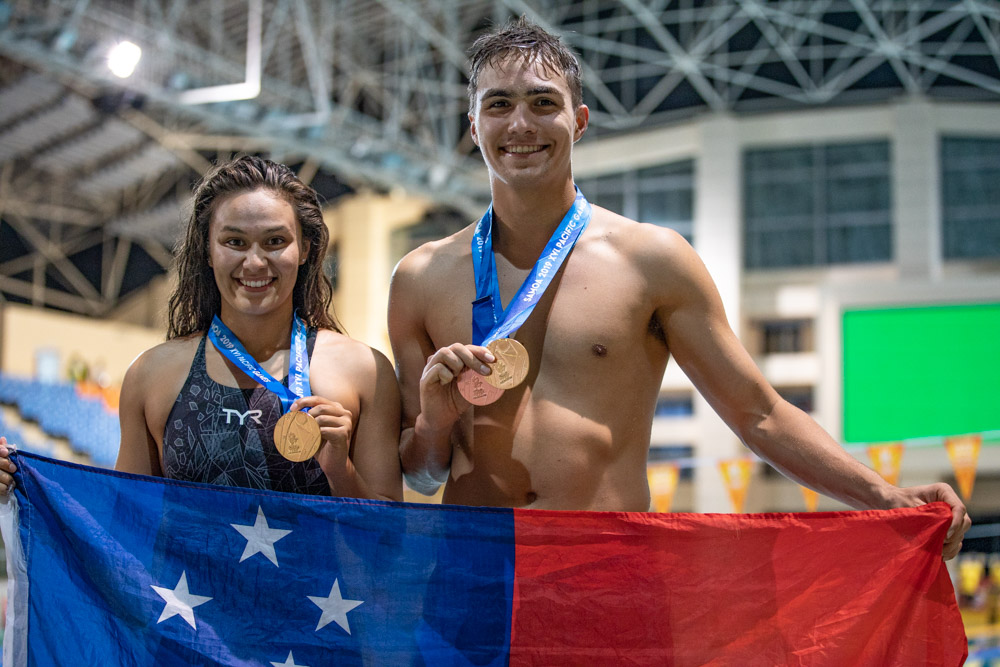 Laura clocked a time of 2:20:84 and Brandon 2:08:48, both ahead of Tahiti and New Caledonia, who were ranked second and third respectively.

Schuster, who is the national swimming team captain, also claimed bronze in the 200 meters breaststroke finals, including Lushavel Strickland for the women’s 50 meters butterfly.

He was the only athlete who represented Samoa in the 2015 Pacific Games in Papua New Guinea, winning silver and bronze, and this time he challenged himself to do better. 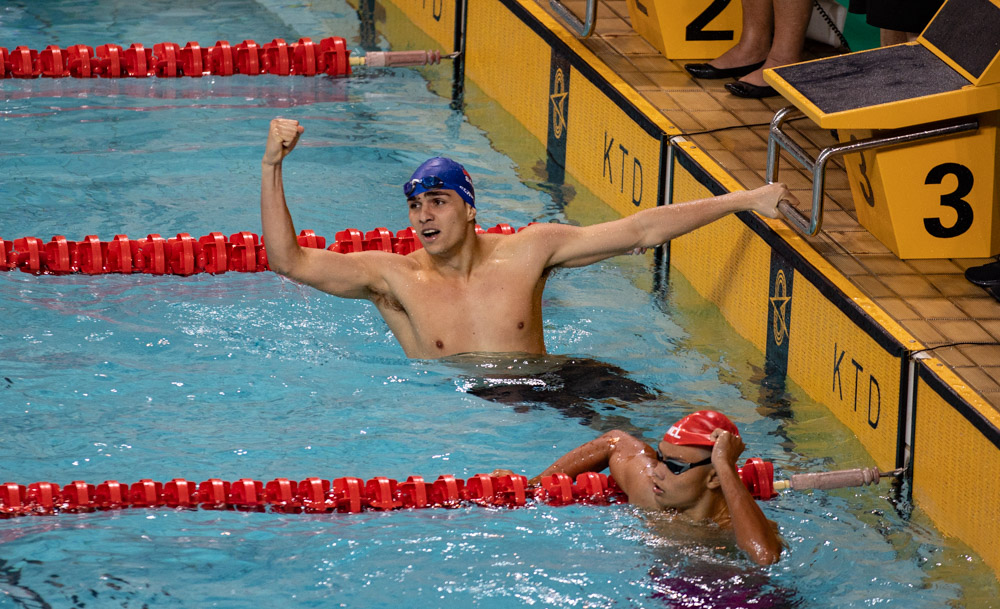 “I just feel so happy, proud, patriotic, everything,” said Schuster.

“When we did the interview this morning (yesterday), I didn’t really know I was going to win gold and I didn’t process all that thought, like I said this morning my aim is to just beat my time that’s all.

“I have competed in such high level events and the last Pacific Games in 2015, I got silver and bronze and I’ve grained that no matter what the competition is I just want to beat myself and beat my times and keep edging closer.”

He said he dropped seven seconds in the 200 meters backstroke from his personal best time in the preliminary rounds yesterday.

“I am just overwhelmed at how much I have improved in that stroke, and I just feel so awesome that I would get a medal representing Samoa, and a gold for that matter.

Schuster also acknowledged the improvement in the Samoa swimming team over the past years.

“It’s just amazing to see how much Samoa swimming has improved and has become competitive. The first day and we already got four medals.

“It’s the first time for Samoa to have this large number of swimmers. Last Pacific Games we got only one bronze and one silver and that’s when I was the only one on the team.

“Small steps at a time. The last Pacific Games, I won bronze and silver and this Pacific Games first day gold and bronze.” 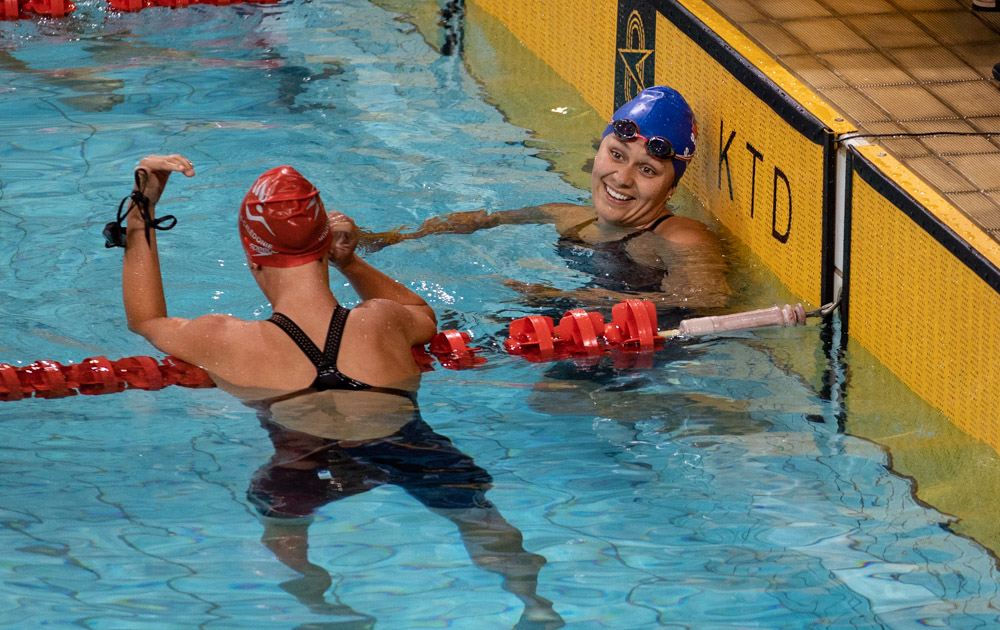 A tired Lauren was too excited not to share her achievements with the Samoa Observer.

“I didn’t know I was going to win a gold, the first 100 meters I thought everyone was really close, they like kind of scared me, I feel like I took it out a little bit too faster.

“I actually added a second to my preliminary time but that’s ok.” 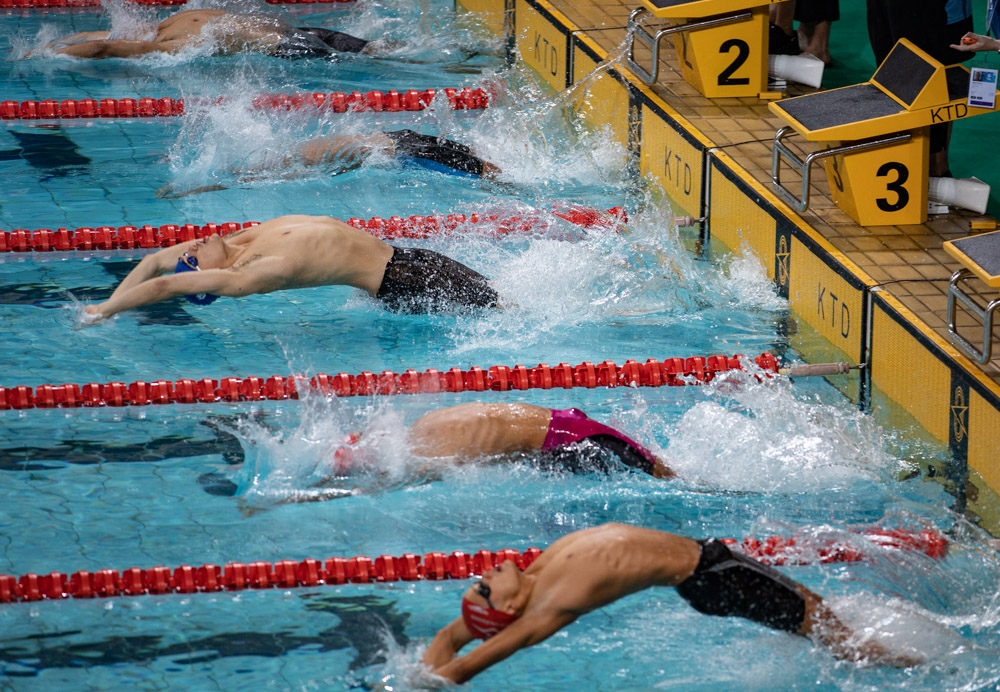 Both gold medalists are taking part in other events over the next four days, with Schuster to take on the 400 IM, 200 IM, 400 freestyle, 200 freestyle, 100 freestyle and whatever other relays.