The Samoa Meteorological Division (M.E.T.) has forecast heavy rain for the first week of the two-week July 7-20 Pacific Games.

Releasing its projections of the weather for this week, the M.E.T. said in its severe weather information bulletin that an active convergence zone north of Samoa continues to trigger rain.

"The active convergence zone lies just to the north of Samoa with associated heavy rainfall activity," the MET bulletin stated.

And the intensity of the rainfall will not be the same as the showers will occur from time to time.

"This severe weather event is at its dissipating stature, although showers is yet to occur from time to time though intensity will not be the same as before."

The M.E.T. warned that the bad weather will lead to poor visibility, gusty winds, slippery roads and possible flooding due to continuous rainfall activity.

Bad weather has already disrupted a number of sports since the Pacific Games competition got underway Monday morning.

Tennis and cricket were amongst the sports affected while the pitch at the Apia Park looked worse for wear when teams descended on the stadium for the rugby league nines tournament. 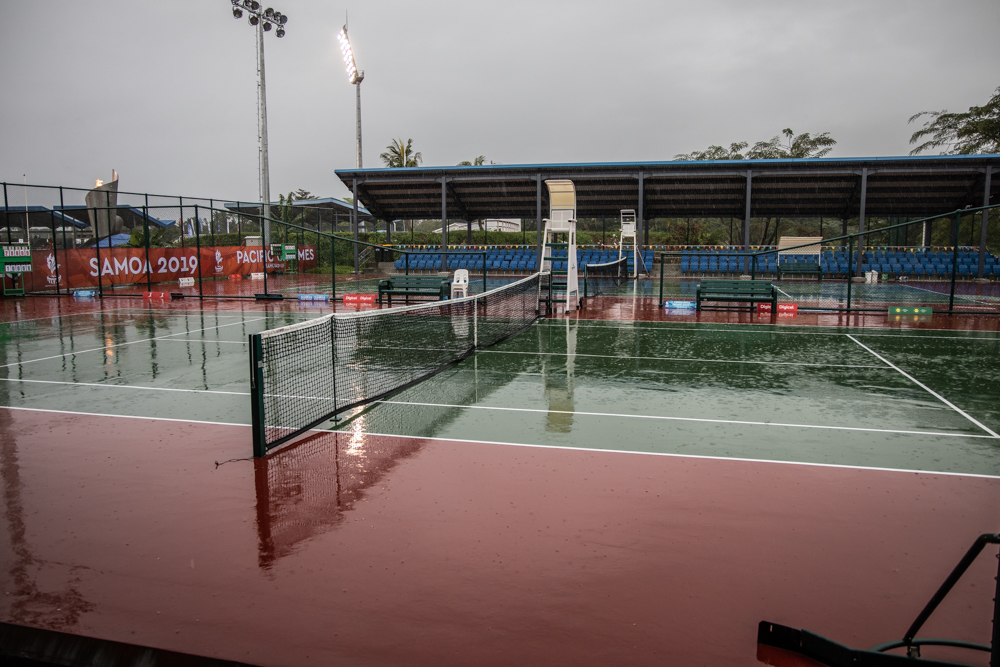 The sports competition manager for tennis,  Tagaloa Yvonne Carruthers, confirmed the postponement of the competition due to heavy rain.

In cricket, the matches of the Samoan men's and women's teams were affected by the bad weather, with officials at one stage suspending play until the weather improved.

At the Apia Park Stadium, the rugby league 9s games were played in atrocious conditions Monday afternoon for both the men's and women's teams.

Last week, the M.E.T. Assistant C.E.O. Mulipola Ausetalia Titimaea advised of the presence of high pressure systems, which he blamed for the uncharacteristic weather.

"Within those strong winds, it also picks up moisture from the sea and drops them on the southern side of the island and then we get brief rainfall.

"They are associated because there is a convergence on just the north side of us. Sometimes when we reach high pressures it moves upon us, that’s why we had that last week, it’s because of that convergence zone.

"Once this high pressure moves off, we should have some fine weather," he said.

Mulipola asked the public to keep an eye out for weather updates on their website which they updated at 5.00pm every day.