Samoa has opened the 2019 XVI Pacific Games in spectacular fashion at the Apia Park.

Samoa’s guests from across the Pacific arrived in their numbers this week and all gathered for the first time at Apia Park to witness a tremendous show of culture, pride, lights and the best of Samoa.

To honour and celebrate each of the 24 countries participating, the athletes, officials and volunteers marched around the Apia Park Stadium race track, bearing their flags, national costumes and dances for the crowd to cheer for.

Most strikingly, each nation was led by a representative, lavishly dressed in their cultural attire. The similarities connect the Blue Pacific, and their differences shone in unique and unexpected ways.

The nations were led by 2015 Pacific Games hosts, “the land of the unexpected,” Papua New Guinea. Led by their tennis player flag bearer Abigail Tere-Apisah, the country burst in bright yellows and reds, and waved countless national flags in the air.

Each nation was led by a sign bearer from Samoa, dressed in full traditional wear and glowing under the floodlights. All 24 sign bearers held their nations up as proudly as though it were their own.

The nations paraded in alphabetical order, except for Samoa, who as the hosts, and with 645 athletes, officials and volunteers from government and beyond, paraded last and were met with raucous applause and a standing ovation from the devoted crowd.

Samoa’s men were dressed in a dark blue shirt, while the women wore turquoise puletasi. Feagaiga Stowers led them under the flag around the park, and it took them two laps before finally filing into their seats.

American Samoa, Australia and the Cook Islands followed, one by one, each taking their time to stroll across the tracks waving for the audience, stopping for photos and taking selfies. The Cook Islands bright green puletasi was hard to miss, as were their abundant and colourful pale.

The small but mighty Federated States of Micronesia were next, with just 28 athletes in their delegation. But it felt like they took up no less space than even the 506 strong Papua New Guinea team.

At 353 athletes, Fiji’s presence was unmissable. They drew massive cheers from the crowd as they walked into the parade, with A-League Golden Boot winning striker Roy Krishna at their helm.

Guam walked on in their professional athlete uniform and several large flags among them, which they held proudly outstretched between athletes. Kiribati was represented in the parade by just four athletes, though they have a delegation of 63 in Samoa.

Marshall Islands and Nauru were brightly dressed, and stopped often to pose for photos and take selfies against a cheerful crowd. The excitement was palpable watching them wave at the crowd.

Throughout the parade, music played and each country was announced in English and French, sharing how many athletes, officials and volunteers arrived and introducing their flag bearer and their achievements.

When New Caledonia arrived before the grandstand where dignitaries sat, they paused and the music went low, while they performed a rousing Kanak dance, which was met with cheers of approval.

So too for New Zealand, who gave a slow and considered haka. Their chanting was outmatched by the roars from the crowd cheering the 50 athletes on.

Niue and the Norfolk Islands also brought small delegations, but were by no means small on the parade stage. They cheered, and hollered, and the crowd came with them, waving whatever they held along with the teams and their flags.

Future hosts of the 2023 Pacific Games Solomon Islands arrived in style, and like many others with their paraplegic athletes in the lead of a large procession swinging ‘one in spirit’ banners.

French Polynesia’s Tahiti team made an impression, with three flag bearers hoisting France, Kanak and even a third traditional flag. They too stood before the dignitaries and performed their dance, rousing up not only the crowd but their parading delegation too.

Throughout the whole procession, the edges of the stadium field filled with the nations taking their seats. In the middle, students awaiting their time to shine sat patiently across the field.

Tokelau arrived to the parade singing proudly to a drum beat, and were met with extraordinary cheers from the crowd. At one point they each calmly placed the signs, flags and bags they held on the ground and performed a traditional dance.

But Tonga, a nation 195 strong was met with possibly the largest cheers yet. The team strolled comfortably across the track, each wearing either an ie Tonga around them or the traditional keikei belt.

Bringing up the rear, Tuvalu and Vanuatu kept the audiences energies high, with bright costumes and loud expressive chanting, such as Vanuatu’s “neva givap!”

Wallis and Futuna’s group were no less enthusiastic, with their flags and ula flying around them as they danced and cheered with the crowd. 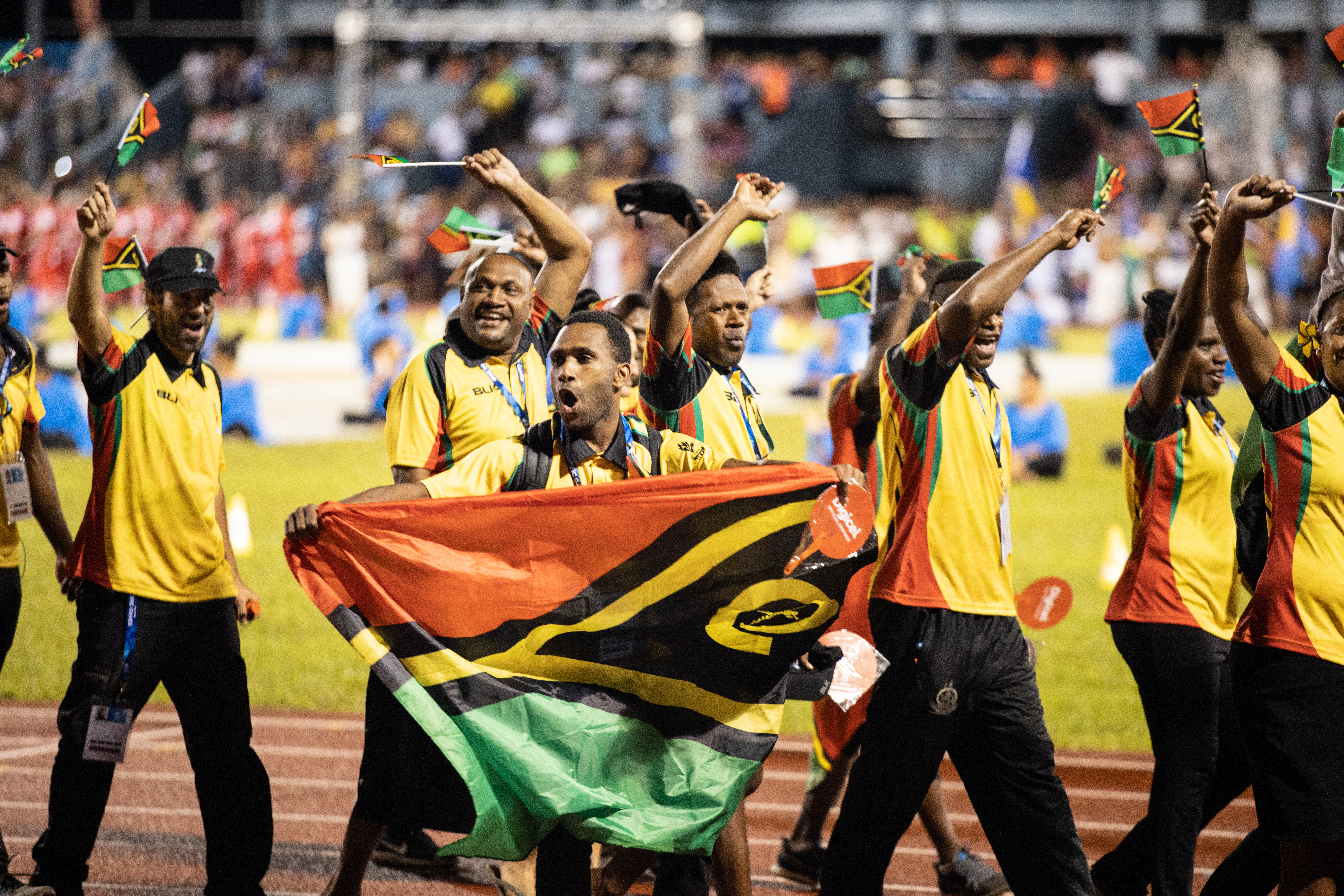