The lawyer, Alex Su'a, representing twenty Congregational Christian Church of Samoa (C.C.C.S.) Ministers, charged for failure to withhold and file their taxes, has filed a no case to answer application in the ongoing hearing.

The application was submitted in the District Court after the prosecution closed their case on Tuesday.

Before Judge Leota Raymond Schuster, Mr. Su’a argued that after calling three witnesses from the prosecution, they failed to give sufficient evidence to prove that the defendants are Ministers of religion.

He said the prosecution did not have a  prima facie case as they only referred to the Tax Identification Number (T.I.N.) in order to identify the Church Ministers and tendered a summon letter.

“The evidence from prosecution is vague and tenuous," he said. "We submit that it’s not sufficient to prove the charges against the defendants.

“It would be prejudicial in the sense that prosecution had called their witnesses and evidence was tested by cross examination and now we are saying that evidence in identifying of the defendants is weak."

Judge Leota had queried prosecution lawyer, Alesana Tumua, on what evidence they had presented in the Court to identify that the defendants are indeed Ministers of religion.

“The legislation doesn’t make the defendants ministers of religion,” he said.

In addition, Judge Leota said the prosecution’s case relies wholly or substantially on the identification of the defendant and interpretation they are taxpayers.

“Identification is the crucial part of the case, it needs to be a clear identification that these are ministers of religion,” he said.

“At least that proves to the Court that the defendants are ministers of religion.”

Judge Leota pointed to the evidence of the Ministry for Revenue Commissioner, Matafeo Avalisa Viali – Fautua’ali’i, where she said she is familiar with some of the ministers but not all of the defendants.

He said while she had only referred to a meeting where Rev. Tautiaga Senara attended, it is unclear if the evidence is reference to after or before the defendants were charged.

“The evidence is vague and unclear – you did not ask Matafeo further to elaborate on that. It was left like that,” he said. 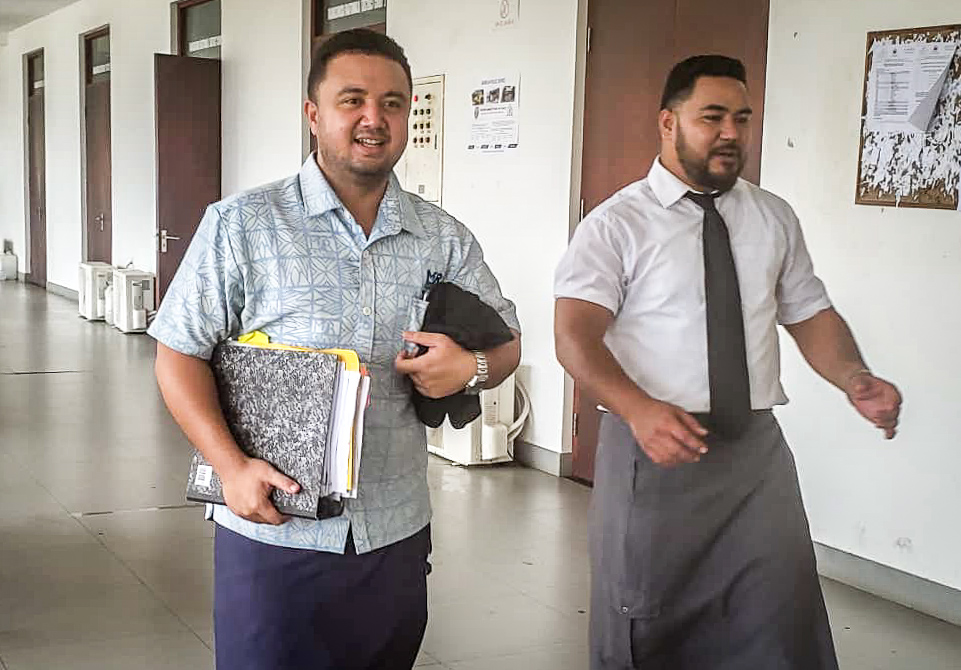 “I gave you (prosecution) amble opportunities to make sure you completed your evidence. Other than that can you point me to any evidence to prove that the twenty defendants are ministers of religion.”

In response, Mr. Tumua relied on the evidence of an Assistant Chief Executive Officer from Ministry of Revenue, Siaaga Ioane and A.C.E.O. Ian Filemu for identification.

He said the evidence from the witnesses is that the defendants were issued a tax identification number and are subject under the law as taxpayers.

Judge Leota then asked how did the witness make the link from the document to the witness and to defendants and identify any of the church ministers charged.

Another prosecution lawyer, Dominic Talouli said because none of the defendants came to register and therefore the Ministry had the authority to register them in the system.

“Because none of the defendants came in with IDs the Ministry preceded with that with administrative work,” said Mr. Talouli.

“The defendants and names of defendants were obtained via our sources through our normal work.

“We managed to identify each of the defendant with their specific village and specific location once we did that we registered them in system and were issued TIN.”

At this point Judge Leota then raised questions about the source that had provided the list of the name of the church ministers including the defendants.

He queried prosecution if they had called the source they referred to give evidence.

In response Mr. Talouli said no.

Then Judge Leota asked about the method used to obtain the information, if the witnesses called by the prosecution were not involved in obtaining the information.

Such information from a source who was not called in to give evidence is hearsay, he said.

“How can you get past the issue of hearsay evidence, given that you did not call the officers that went out and obtained the information, and identify it as facts,” he said.

“The information was received by someone that went out and that was passed on to Siaaga, Ian and then Matafeo as C.E.O.

“I understand position of C.E.O. she’s not the person that goes out and get the information.

“You have the information in the possession of Ministry that evidence came out in the evidence of Siaaga and Ian but you agree with me that its hearsay evidence.

“How do I as judge get past the hearsay evidence.

In reference to the Evidence Act, Judge Leota pointed out that hearsay statement is admissible in any proceedings if, (a) circumstances relating to statement provide reasonable assurance that the statement is reliable.

Furthermore the Act states that hearsay evidence is admissible, if the maker of the statement is not available, in which prosecution did not say whether their witness was not available, said the Judge.

He emphasised that prosecution had to provide reasonable assurance that statement is reliable and if there is evidence that the information from the source is reliable.

In response Mr. Talouli said Matafeo and other A.C.E.O. are long serving employees of the government.

But Judge Leota told the lawyer that its not the evidence of the witnesses from prosecution that is questioned.

He said it is the information that was obtained and who obtained it and if its reliable.

“I tell you this, the C.E.O. relied on information from officers and source.

“In the same token if information is incorrect or inaccurate and a complete lie, the C.E.O. would still have to rely on it. Unless she becomes aware of it that its inaccurate information.

“Because she is only relying on information given to her by the officers.

“She didn’t actually go out and get the information, she relied on what was given to her by other people.”

However, Mr. Talouli insisted that the evidence from the witnesses they called should be accepted by the Court.

Judge Leota then questioned if he is asking the Court to consider hearsay evidence in the absence of the witness to give evidence.

“Its the prosecution job to prove the case beyond reasonable doubt,” he reminded prosecution.

“Its your responsibility and it rests with you.

“You decided to call only three witnesses and they are the C.E.O. and A.C.E.Os dealing with decision making of the Ministry.

“You omitted to call the actual people who obtained the information as to identification of the defendants.

“Now you are asking the Court to overcome the hearsay rule and accept the evidence Siaaga and Ian on the basis of hearsay.

“What evidence given by Siaaga and Ian that the sources that officers obtained the information from is reliable given the fact that the information is not directly from defendants it was from second or third parties.”

Mr. Talouli said in the evidence of Mr. Filemu he went into the system to obtain the correspondence of the villages and addresses of the defendants.

“We maintain that gathering information from the villages, it’s still reliable as to sources went out to the system and correspondence, the Ministry did its job and the statement is reliable,” he said.

The Court heard that the M.O.R. source that had obtained the evidence is an employee of the Ministry whose father is a minister of religion.

Judge Leota then adjourned the matter for his decision on the no case application filed by defense counsel.