The Invest Open golf tournament is being used as the last trial for five female golfers to qualify and represent Samoa in next month's Pacific Games.

One of the female players, vying for a spot in Samoa’s women team is 28-year-old, Aileen Meredith, from Vailele.

Meredith has been playing golf for 17 years.

She received a scholarship to play golf at the Alabama State University in the U.S. for two years and New Mexico for three years. She has also played in Australia and New Zealand.

During the 2007 Pacific Games, she won a bronze medal individually and was part of team Samoa winning silver.

A mother of two, Aileen is of the view that Samoa has a good chance of winning gold in the upcoming Games.

But the team needs to step up and play well.

“We all aim for gold and our advantage right now is our home course but we also need to step up and play well. The team will be finalized on Friday proving yourself in the last remaining three days.

“The tournament plays a big part for us — it’s like judgement day where we will know if we practiced hard enough — and besides we only have one week break before the Games."

Everyone wants to make the final team, Aileen added, but when she is not on the course she is helping her parents at their bakery shop and looking after her children.

Another female golfer vying for a spot is Leota Tima Leavai, who has represented Samoa more than three times, and appreciates the significance of the trials.

“I just want to get in. I am very focused, I want to play well because we have been told that this is the last leg of trials to go through, we have been through other stages.

“The trial is providing us with an opportunity to prove ourselves if we are good enough to be in the team," she said. 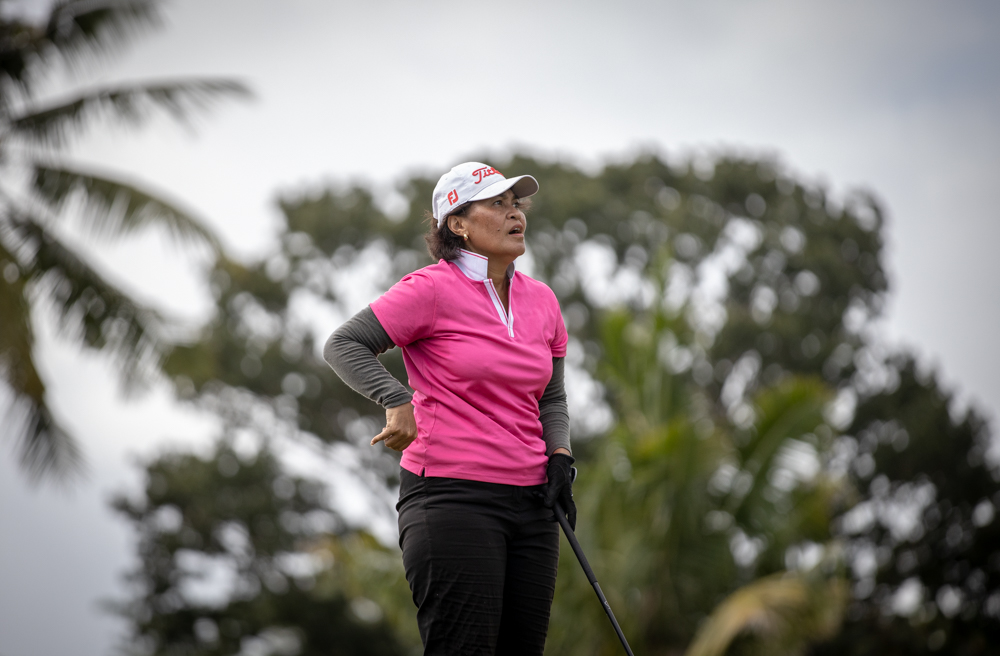 Her success on the golf course has included a silver and bronze in 2011 in New Caledonia, where they were ranked third in the region for woman golfers.

“In the past we have won silver and bronze. The last time I represented Samoa it was in 2011 and we got a bronze in New Caledonia and ranked number three lady golfers in the Pacific."

Next month's Pacific Games in Samoa offers her one last chance to play competitive golf, as she plans to retire if she does not make the squad.

“I really want to get into this team because it will be my last time to play really competitive golf, before I retire it is with my hope that my experience will help me play well, and I also played for tennis.

“I played in the professionals and amateurs and it was very encouraging to see these good players. I love golf and representing Samoa as my service to country," she added.

The other female golfers include Leleaga Meredith, Olive Tapu and Faith Vui.