"We are not fools," P.M. rebukes Faumuina

In Parliament, the Prime Minister also rebuked Faumuina for suggesting that the budget is unbalanced and that some Government developments are a “waste of money.”

Tuilaepa told Parliament that Cabinet Ministers are not fools and they cannot just sit back and not respond to speeches that incite anti-government sentiments.

“The Member is not prevented from expressing his views,” Tuilaepa said. “We are the Human Rights Protection Party (H.R.P.P.) that stands to protect people’s human rights.

“But we are not fools and Cabinet (Ministers are) listening. There are speeches that appear to be clear from the start but it stirs things as it comes to the end and the Member is the one who is inciting things.”

Tuilaepa did not say what “things” he was referring to. But he cautioned Faumuina that he is taking notes.

“The backseat may not be paying attention to it but I am listening to him talking about the unbalanced budget and the waste of money,” Tuilaepa said.

“I can talk the whole day about just how wrong you are with the matters you are raising.”

The exchange between Tuilaepa and Faumuina took place when Parliament reconvened to discuss the budget for 2019/2020. 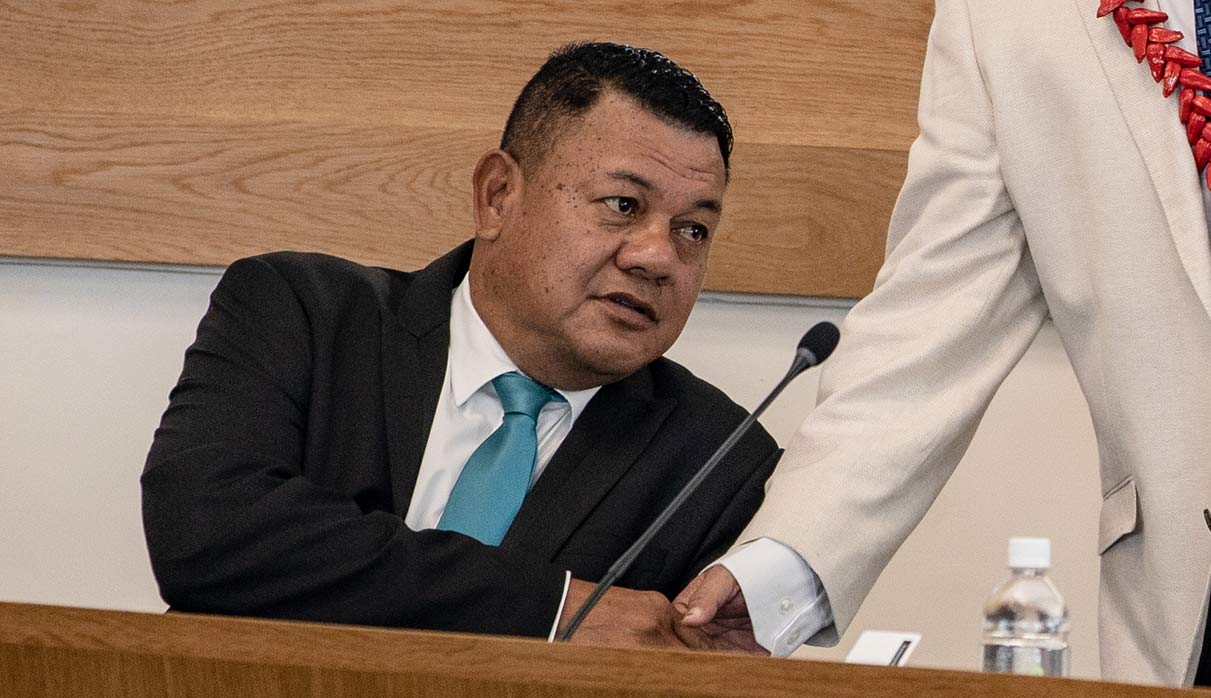 Faumuina had taken the floor and told Parliament that as a member of the H.R.P.P., there are matters, which need to be clarified for public understanding.

He said “there are members (of the H.R.P.P.)” who speak that “the old man does not want to listen to.” The “old man” he was referring to is Prime Minister Tuilaepa.

But before the M.P. could start talking about the matters he wanted to clarify, the Prime Minister intervened. It was then he warned him against inciting anger against the Government’s projects.

Tuilaepa reminded the M.P. that he is new in Parliament and that he should present his views in acceptable manner.

“In this party, there are members who came under the flag of H.R.P.P. just to win their seat,” Tuilaepa said.

“There are members (of H.R.P.P.) who joined just for getting through (the General election) but they cannot be trusted and I am aware of them.

“I didn’t become a leader yesterday – I am farsighted.”

The Prime Minister said there is no need to mince words in Parliament when matters of importance to the country are discussed in Parliament.

Speaker of Parliament, Leaupepe Toleafoa Faafisi, joined the Prime Minister and advised Faumuina to take heed of what had been raised by Tuilaepa.

Leaupepe said the Member should not be too eager to score points and in the process offend Government officials who work towards planning the developments.

“For us, we should not make comments that make you sound good outside but can hurt those that are working with honesty,” said the Speaker.

“I urge the Member to move on to another matter, especially those pertaining to the development of the territorial constituency.”

In response, Fuamuina insisted that he was trying to address “some matters” but the Prime Minister “sees it in a different way.”

The M.P. then spoke about the Office of the Electoral Commissioner and its work, in relation to territorial boundaries for Vailoa and Tulaele. He asked if the office could review the boundaries of the villages, considering that the eastern side of the road is Tulaele and on the western side is Vailoa.

“It is noted that there are voters being registered in Tulaele but live in Vailoa,” said the M.P.

“I'm asking if the Minister can look into the boundaries for these two villages and check through the Minister M.N.R.E. and the Electoral Commissioner.”

Faumuina concluded that he would address other matters directly with the responsible Ministers.

At this point, the Prime Minister took the floor again, and told the M.P. that there are two opportunities for any Member to address issues. These are: addressing an issue and correcting a matter.

“That is why I stood up as a Cabinet Minister to correct some of those matters,” Tuilaepa reiterated.

“These opportunities are under Standing Orders and as usual when a Member raises a matter, we then take the floor in that instance to address the issue right way.

“There is no other time to address matters than at this moment. As the saying goes, the best time to straighten a bended nail is when it’s still hot, because if we don’t respond right away — those listening might not tune in later, and will take what the Member says as being correct.”

In addition, Tuilaepa urged Faumuina to attend the H.R.P.P. caucus meetings so he could understand what is happening.

“It's been months since I last saw you and that is the reason why you don’t understand,” he said.

“If you had attended the meetings then you might have understood. This is also the only chance the matters are clarified is here as I don’t see you at the meetings.”

In response , Faumuina said he had missed the meetings as he was overseas for treatment.

Speaker Leaupepe then apologised that it was an oversight on his part, in forgetting to pass on the apology from Faumuina for not attending the meetings.

The Speaker said he knows that God sees and knows why the member missed the meetings.