The palm leaves are washed, soaked and then placed in the iron press for just a minute to make a perfect plate. (Photo: Aufai Areta Areta)
Climate Change

On the hills of Tanumapua, two cousins are starting a venture to produce a line of dishes and cutlery from Samoan palm leaves (aulosoloso) and carve out a space for themselves in the market.

James Atherton and Alan Schwalger have invested in a palm leave plate press all the way from India and installed it at the back of their families homestead.

From their modest factory floor and 100 acres of arable land and palm supply, they hope to add a valuable new commodity to Samoa and interrupt a stream of single use plastics and styrofoam products that are damaging the environment.

Palm leaf plates are a popular item in India, where the very suitable betel nut palm grows in abundance. Mr Atherton said while littering is still a problem, there is almost no styrofoam or plastic takeaway dishes lining the streets – just biodegradable, natural palm plates. 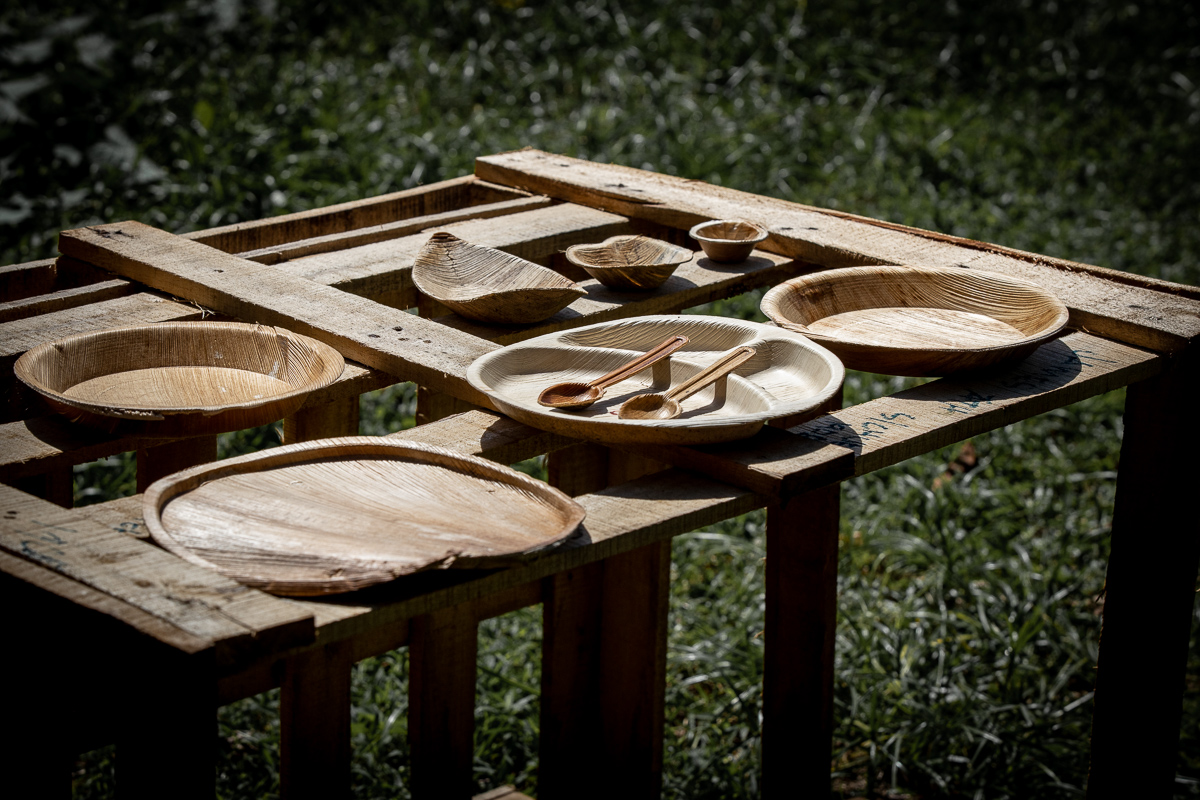 “It’s just heat and hydraulic pressure,” Mr Atherton explained. The leaf doesn’t need any chemical addition to transform from being organic waste to marketable treasure. They can last months and be reused at least a dozen times (especially if dried well), he said.

“We are not doing anything to add to pollution, if anything we are reducing it because we are using something that would be wasted and replacing a product that causes damage,” he said.

Consumers can avoid the heaving landfill by composting their used plates either in a compost heap or just in the garden.

“But we have got to move away from single use anything,” Mr Atherton said.

“It’s so wasteful, when by reusing we could cut down our waste massively.” 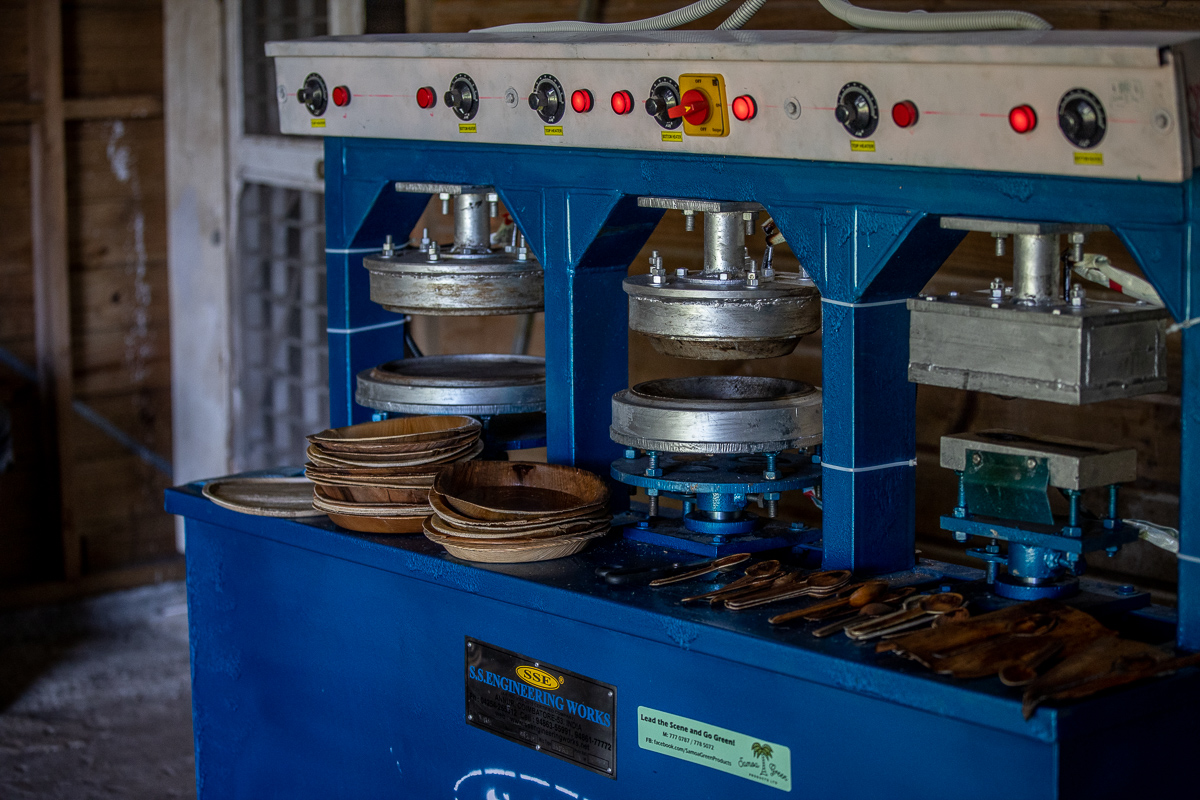 The press has been in Samoa less than a fortnight and the pair has been stockpiling leaves from different palm varieties to experiment with. So far their favourite is the royal palm for its density and the alexander palm because it grows rampant.

The leaves or aulosoloso, the part of the palm leaf attached to the tree below the leafy branch, is washed in fresh water and scrubbed clean of insects, dirt or mould. They are soaked and the iron plates of the press are heated to 80 degrees.

A large leave can make between three and four plates and all the off cuts can be used for spoons and eventually other cutlery.

Mr Atherton said their business should bring revenue to more than them and their small staff. They will pay anyone who can bring them quality, big fallen palm leaves to use in the press, though it is still too early to have named a price.

They have yet to decide how much to charge for their plates too, but hope to be on sale by July. While they can’t hope to compete with other "green" products out there like sugar cane dishes or even styrofoam, Mr Schwalger hopes Samoan people will want to buy locally.

“It’s made in Samoa, we are using something that is usually burned or wasted, we are making use of it,” he said.

So far, the pair has succeeded making platters, plates and compartment plates popular among Samoan caterers. They have the die (press shape) to make small heart shaped ramekins for sauces or finger food and a small clam shaped box. 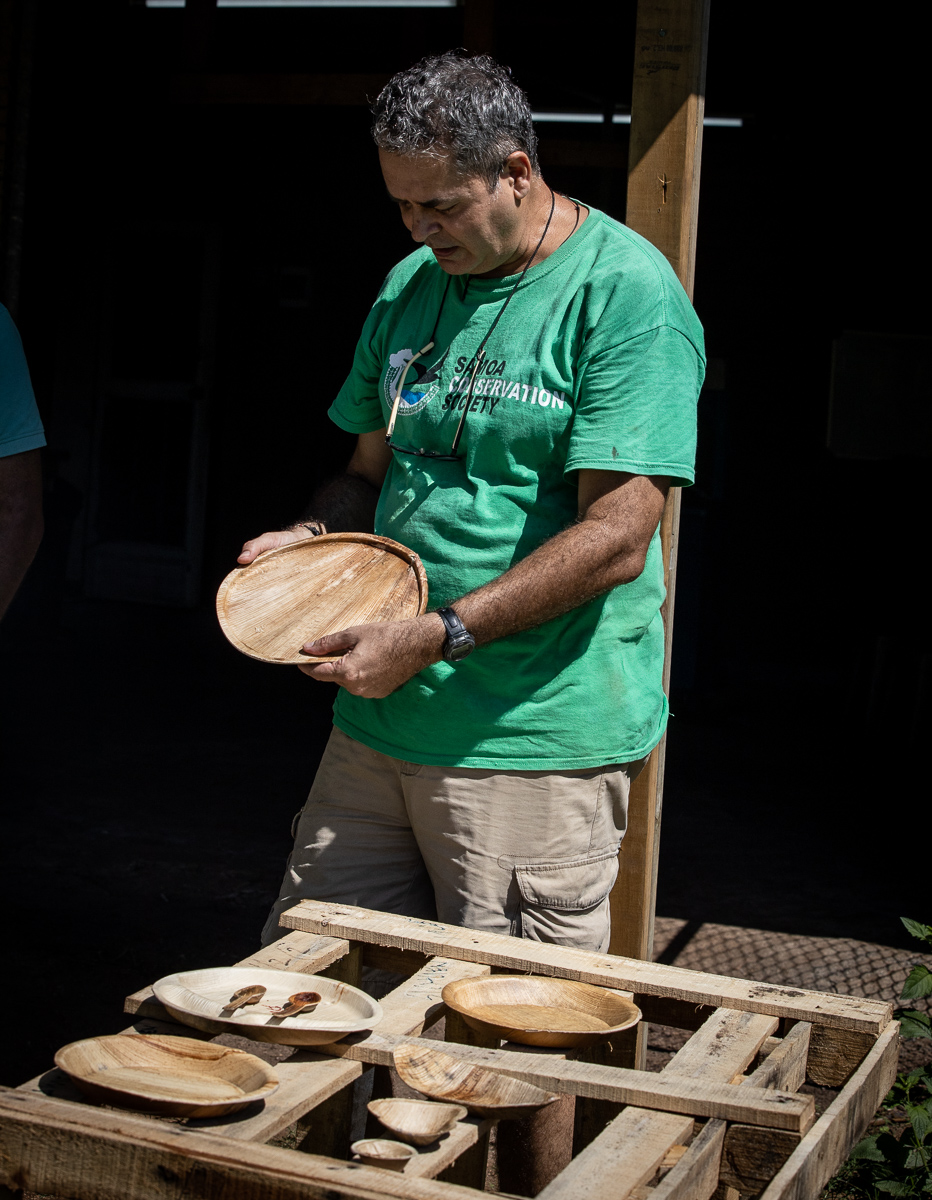 While the experimentation continues, Mr Atherton said it is clear supply might be an issue. He wants to see a steady stream of quality leaves sold to them as well as some new plantations of royal or alexander palm.

“We also want to further develop the resources that are the source of our products.

Part of the project is to invest money into planting and promoting native trees, not just to make money.

“I would like to think people will resonate with that, that when they buy a product it’s not just that it’s cheap or they like it, but that there is something else, bigger going on,” Mr Atherton said.

He said in just a week they don’t yet know the full electricity bill this venture will bear. In the future if the Government begins buying solar power from private providers, the company could invest in enough solar panels to power the heavy duty press.

For Mr Atherton and Mr Schwalger, plates are just the beginning and so are palms. They want to try and make a cup alternative and a takeaway box, but that might require more experimentation.

In India, some plates are made by stitching vine leaves together and pressing them together with newspaper or card for backing. With an over-abundance of banana leaves, breadfruit leaves and even invasive vine species, Samoa Green Products may literally be producing green products soon enough. 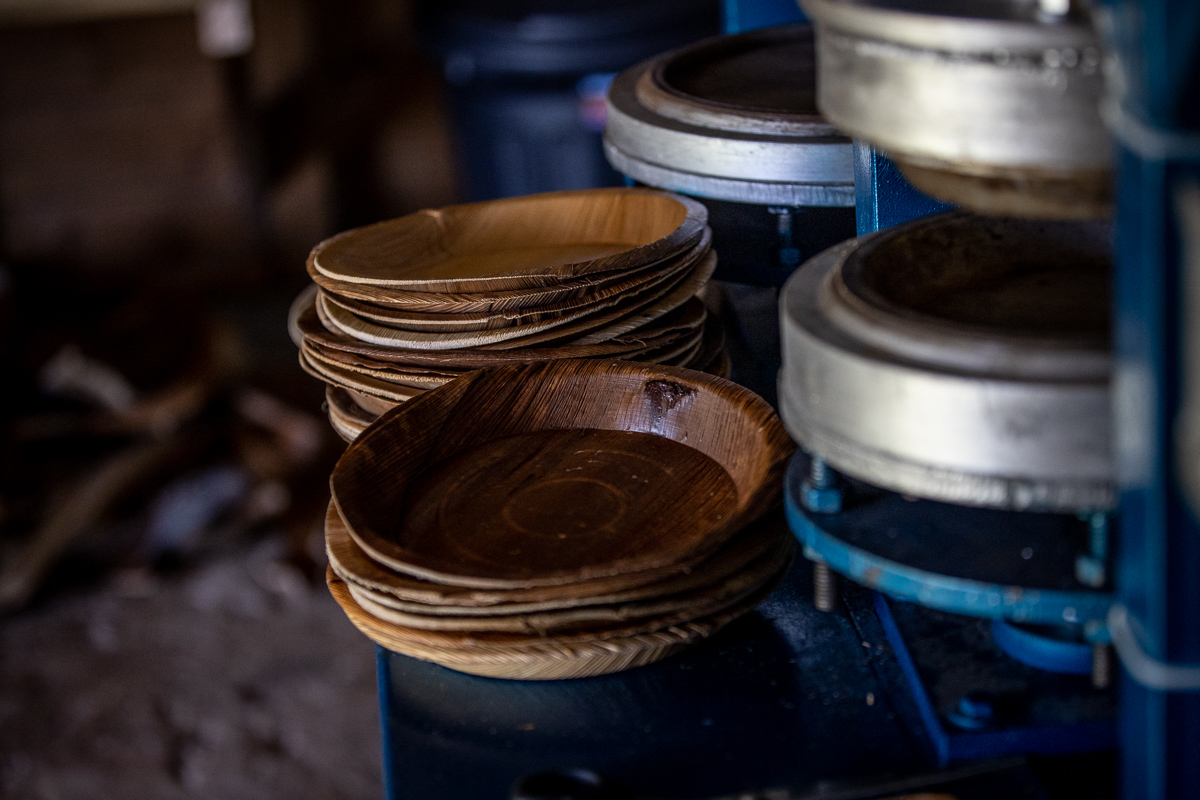