Vaili and Matavao star in their first Sevens Series campaigns

Sports
Johnny Vaili breaks through the Canada defense for a try at the Las Vegas Sevens in March. (Photo: Mike Lee - KLC fotos for World Rugby)

Both newcomers and veterans contributed to the Manu Samoa 7s achieving a sixth place finish in the 2019 World Rugby Sevens Series rankings, which was their best overall result since 2013.

Wing Johnny Vaili (24) shone in his debut season as Samoa's top points and try scorer, earning himself a nomination for overall Series Rookie of the Year.

Manu Samoa 7s coach Sir Gordon Tietjens said he became a key player in the team over the course of the season.

“He has the x-factor, any sevens player that has that, they can win you games.

“He’s certainly got some real potential to be a very good, good sevens player."

Tietjens said although there are a lot of attributes that make Vaili special, he had a big learning curve this season and there are still things he needs to work on.

“He’s still very young, he’s still got lots to learn about the game of sevens as well.

“There are some areas around his defence he’s gotta get right, understanding the defensive systems in the game of sevens.

“It’s how he bounces back next year, and adds different things to his game."

Tietjens said teams will have analysed Vaili's game now, and he won't have the same freedom going forward because a lot of Samoa's opponents didn't know who he was.

Another debutant who made a big impact was Manu Samoa 15s halfback Melani Matavao, who came into the sevens side for the Las Vegas and Vancouver legs of the Series. 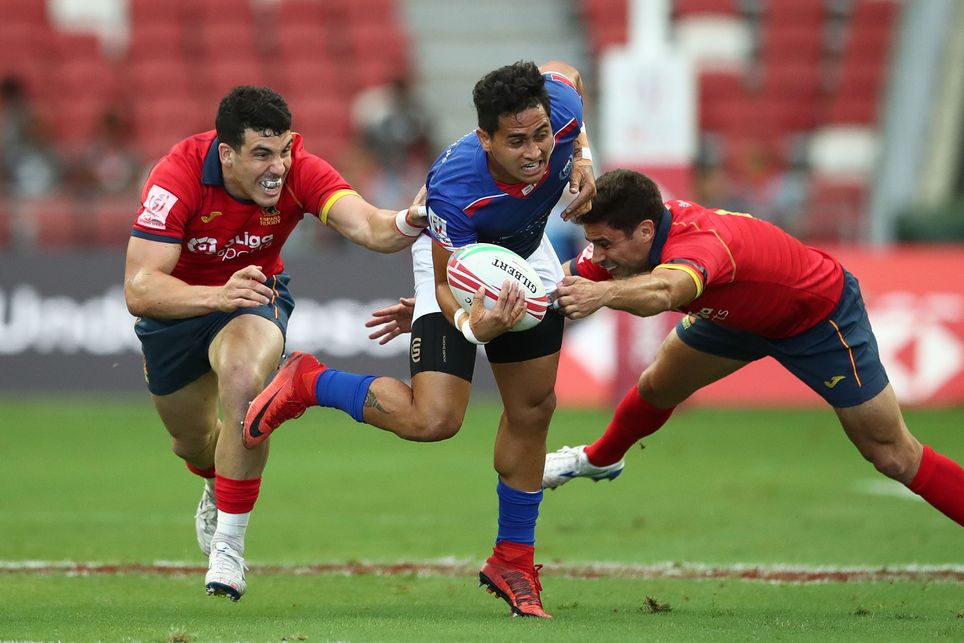 Prior to Las Vegas, Samoa had made the Cup quarterfinals in one of four Series tournaments, while after Matavao (23) joined the team they made that stage in five of six rounds.

“He saw an opportunity to play sevens, and he took that exceptionally well," Tietjens said.

“I thought he was simply outstanding for someone that had never played a lot of sevens."

Tietjens said he was key to Samoa's performances in the Las Vegas, Vancouver and Hong Kong tournaments, where they finished second, seventh equal and fourth respectively.

“One of the key ingredients for a very, very good sevens player is [being able to] buy time.

“Melani can do that, he’s got outstanding peripheral vision."

Tietjens said his defensive skills stood out as well.

“He’s got a big ticker, he’s someone that really puts his body on the line for someone that’s not a huge man."

Matavao missed the final round of the Sevens Series in Paris at the beginning of June with what Tietjens said was a minor medial ligament injury.

The three to four week recovery timeline likely wouldn't have kept him from playing sevens at the Pacific Games in July, however Matavao will not be a part of that squad regardless.

Tietjens said he wants to make the Manu Samoa 15s side for the Rugby World Cup in September, and as such Matavao will be with that team as they prepare for the Pacific Nations Cup at the end of July.

But the coach said they hope to have Matavao back in the sevens mix for the Oceania Sevens in November, as Samoa look to qualify for the Olympics.

Tietjens has always said one of his overarching goals as the Manu Samoa 7s coach is to grow player depth on the island.

He gave debuts to 14 players during the 2019 World Rugby Sevens Series season.

“Paulo Toilolo is one of those, he’s got some real potential in a real key position (playmaker) in the game of sevens.

“He’s lucky to have someone like (229-match veteran) Tila Mealoi there to teach him as well.

“When you bring on new younger players, you’ve gotta have a core of experienced players for them to work around."

“They’re players now that are starting to build a lot of tournaments under their name, and that’s vital when you’re looking to bring new younger players into the system as well."