Samoans of all ages march to celebrate freedom

Students from Le Amosa marches on in the early hours of Saturday to commemorate the 57 Independence Celebration (Photo: Vaitogi Asuisui Matafeo)

The number of people gathered at Mulinu’u to celebrate the 57th Independence celebration might have dropped when compared to yesteryears, but the spirit was certainly high and alive at the commemoration.

For this year the marching parade took center stage at the celebration, with more than 30 groups participating. They included schools, Government organisations, sporting bodies, businesses, church and community groups.

Some came as early as 3 o’clock in the morning just to make sure they have a space to stand on.

At 6.35am the Police Band took the parade lead, followed by special education schools for students with disability and schools from rural and urban areas. 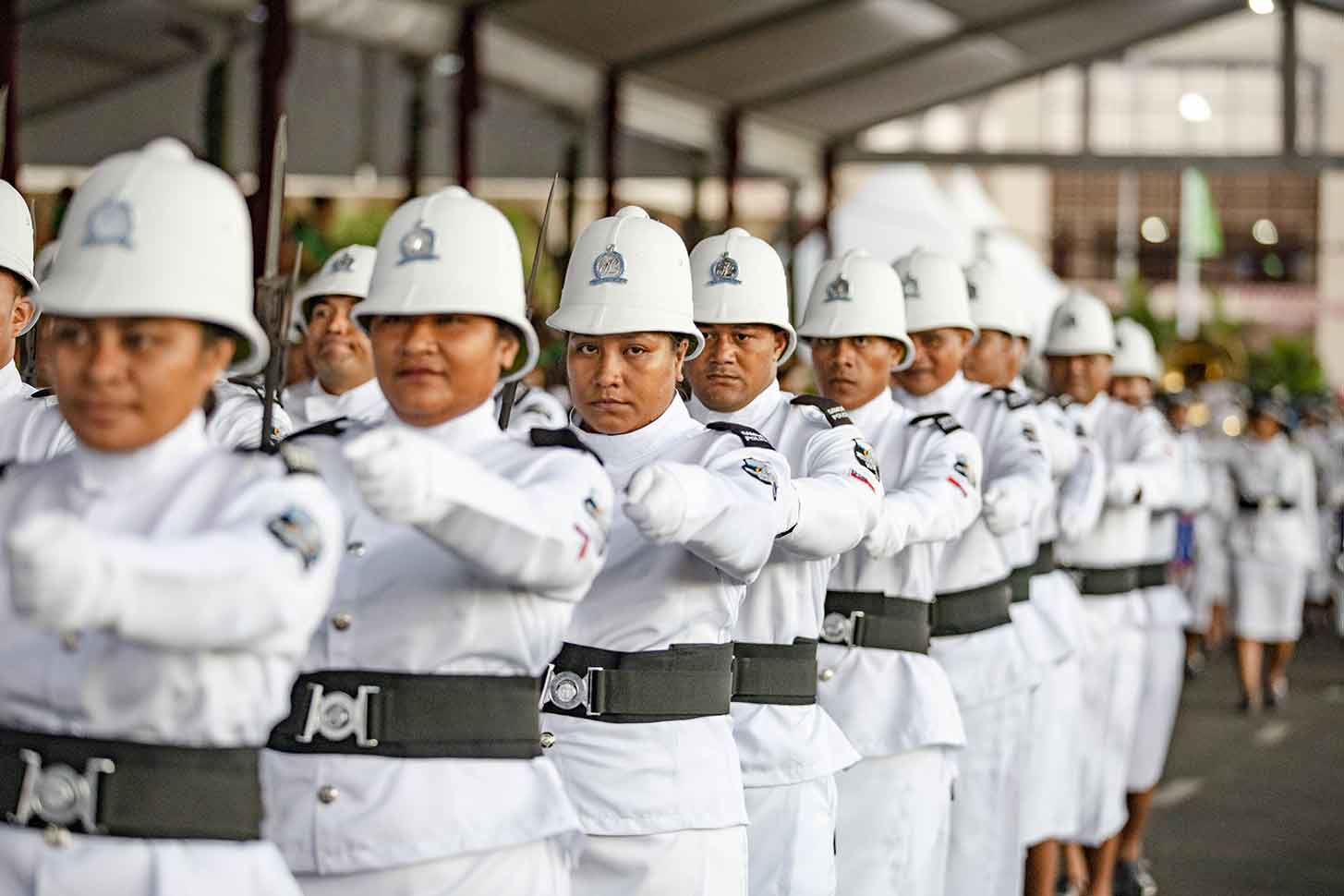 There were young and old, they came in colours and styles, and saluting the official guests seated on the stage to show their pride and delight — for being part of the Independence anniversary.

The Police instructed that the marchers move along and not pause in front of the special guests, in order to save time and ensure the programme was on scheduled.

However, the proud marchers brushed off orders from the law enforcers with a tongue-in-cheek attitude, smiling at the officers as they continue to give out their own signature salute, to the distinguished guests.

As they rightly claim, the celebration comes once in a year and the quick "forward march" is not enough to convey their appreciation for the day. 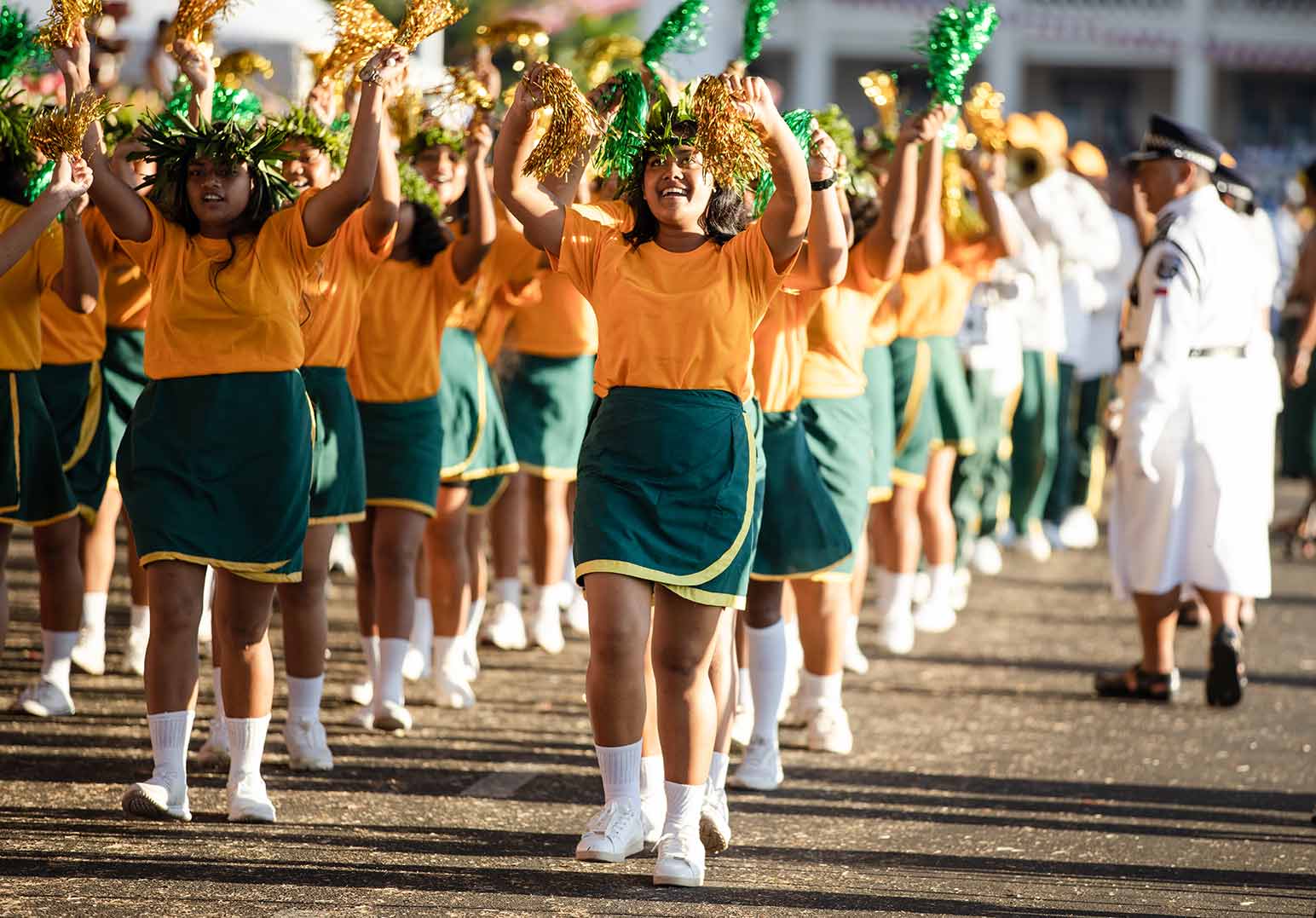 One of the groups that took their time in showcasing what they had been practicing over the weeks is the Avele College marching girls and the school band.

The girls were dressed in green skirts with bright yellow stripes and pom poms while the boys had their long green pants on and instruments high up.

The group turned heads as they stood uniformed in front of the guests giving out a brief cheerful and loud entertainment. 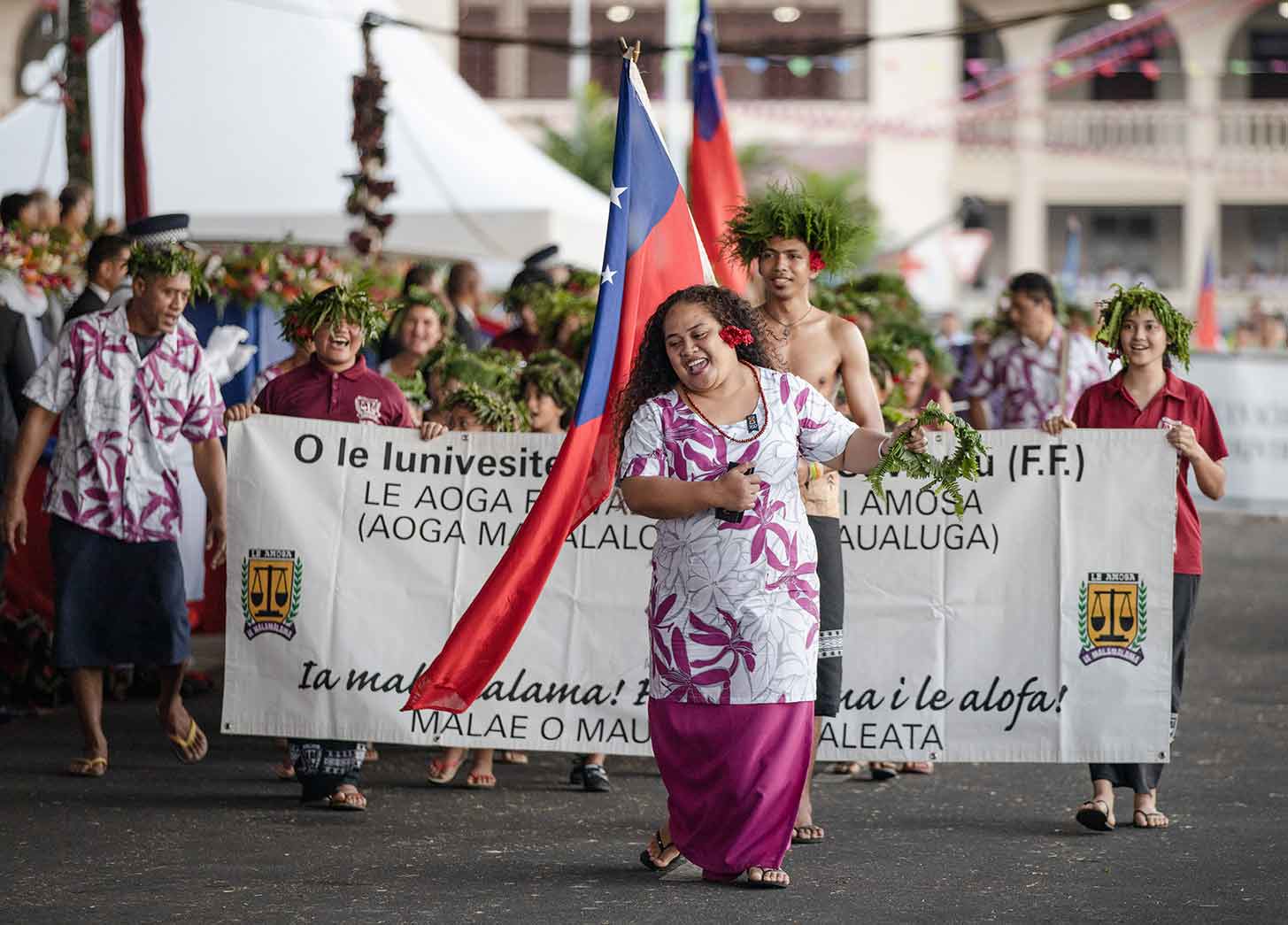 Perhaps another group, that also sent out a loud message of their support with more than 100 local employers marching, was the Chinese owned businesses.

The Chinese nationals did not shy away from the celebration as they wave the Samoan flag around. 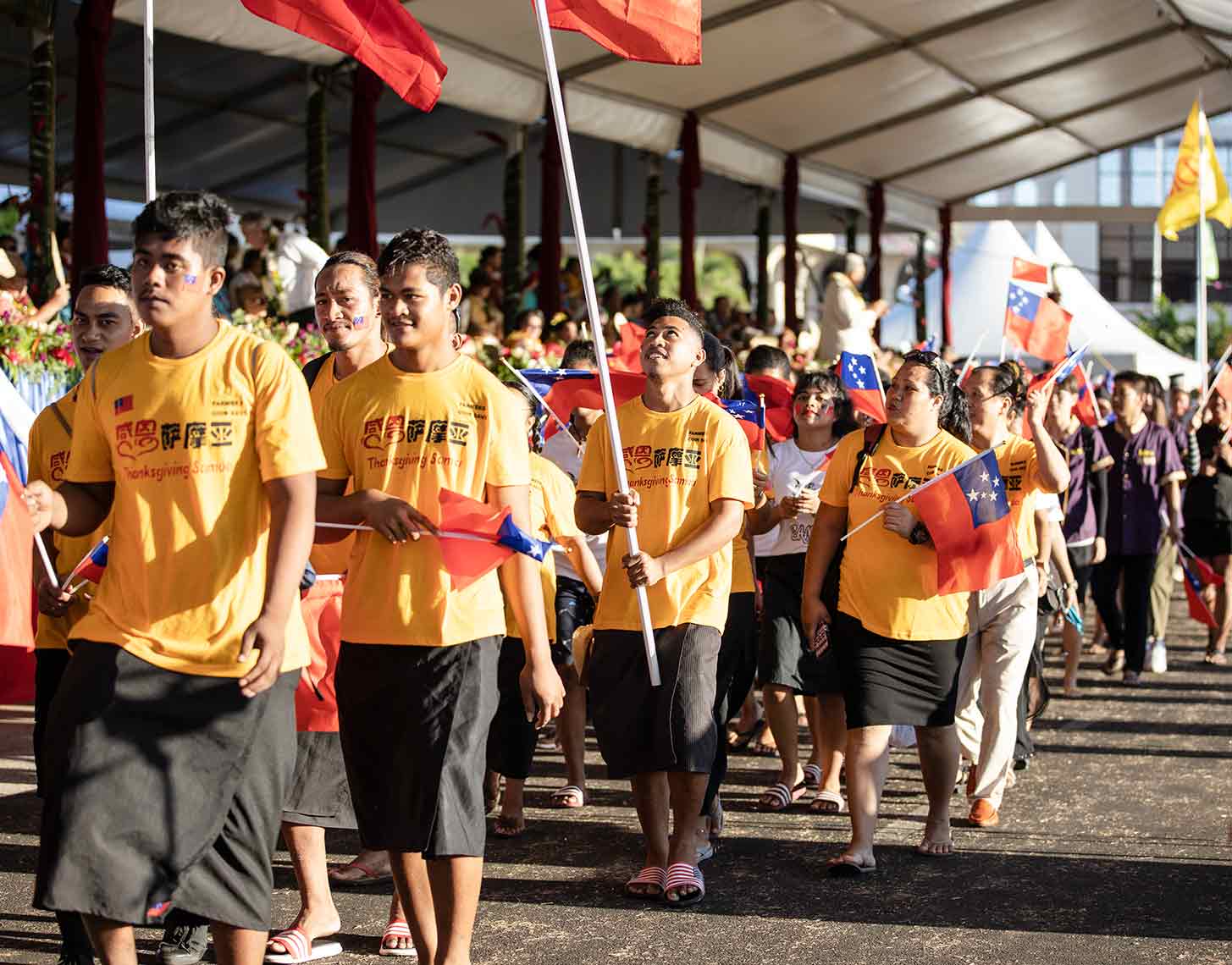 There were also groups who for the first time were part of the independence celebrations.

Falealili Seasonal Workers was one of them.

The men from the district of Falealili that consists of more than 10 sub-villages are working in New Zealand and the Australia under the seasonal workers scheme by Government.

Team leader Ausegalelei Uiti Lagavale said their participation for the first time, was an acknowledgement of their appreciation to the Government, for the scheme that has benefited hundreds of men from the district.

Ausegalelei simply puts it that “this is our own way of showing our gratitude for our Government”.

Different groups have different reasons of taking part in the event.

More than a hundred from the Falelatai community, which was made up of Primary schools students and Women’s Committee had their own intentions.

Having left the village at 2 o’clock in the morning for Mulinu’u, the Falelatai community was at the celebration to support the Head of State, Tuimaleali’ifano Va’aletoa Sualauvi II. 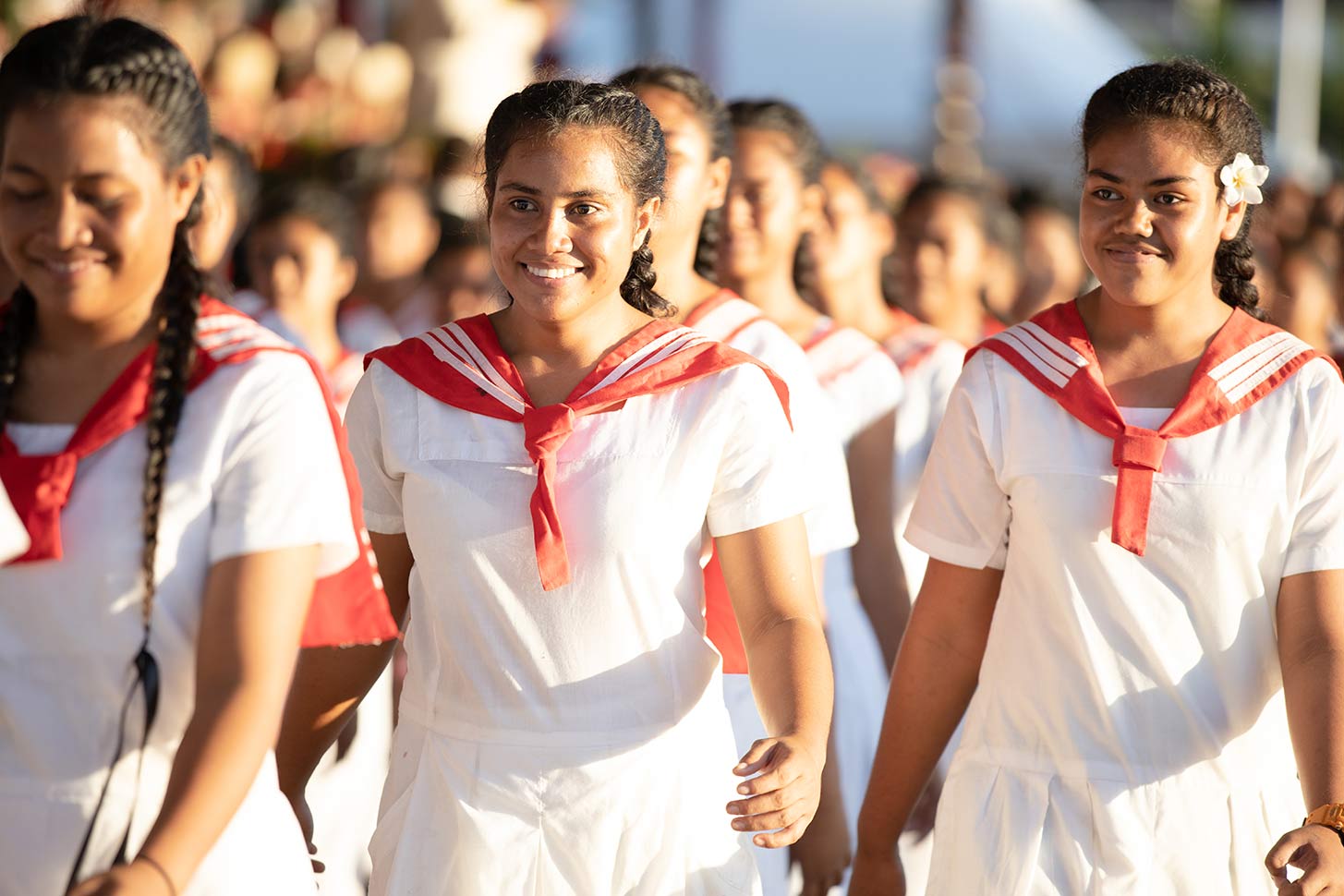 “The Independence celebration is of significance to all of us because of how we were freed from the colonial rulers but our presence here is also to show our Tama Aiga that he has our support.

“Sun or rain we will be here to see him and I know he was happy to see people from his district showing up in numbers.” 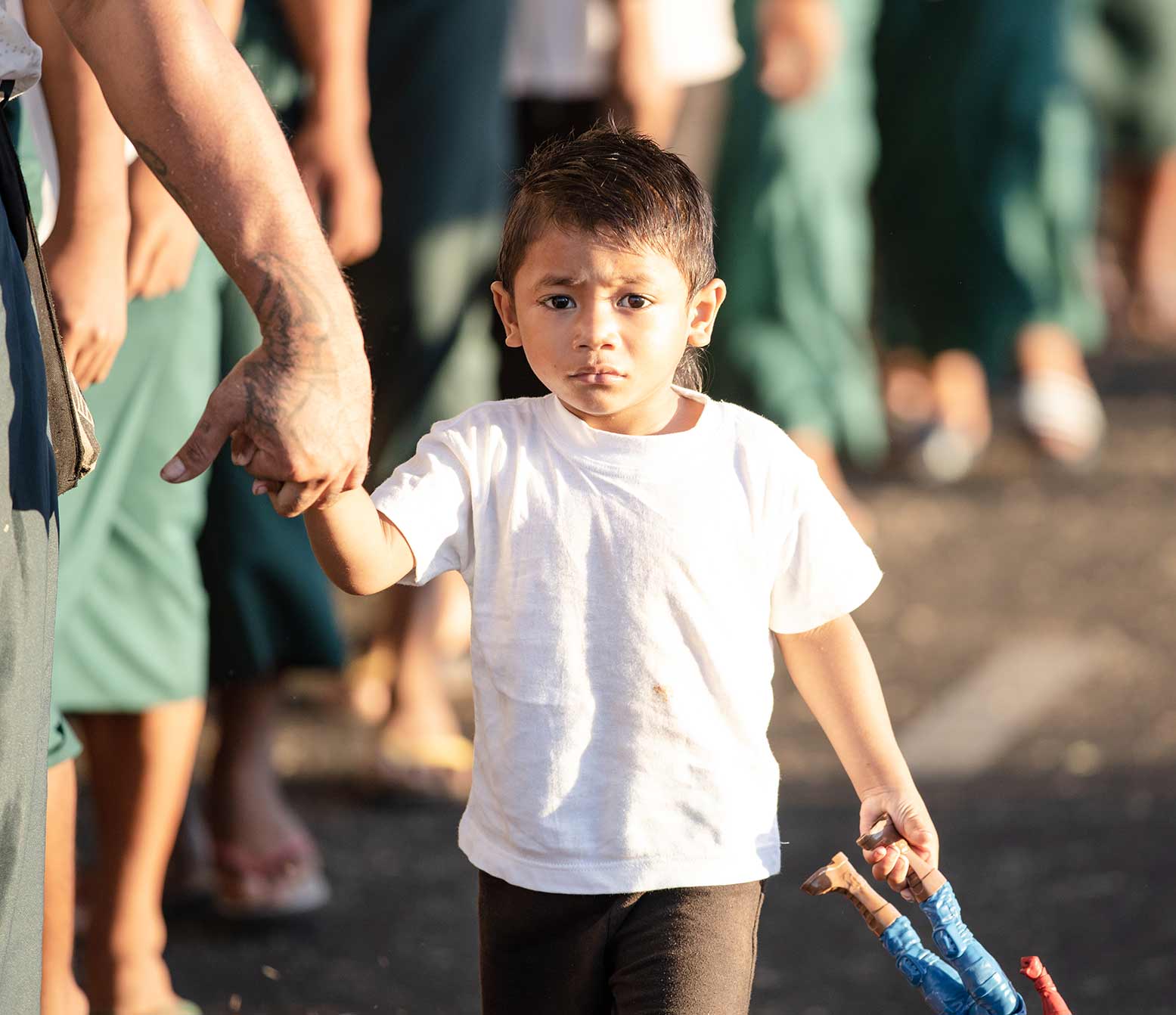 The march concluded before 9 o’clock with the Red Cross team and the Independence Committee taking the last walk to close the march.