The Association of World Election Bodies (A.W.E.B.) from South Korea has handed over an electoral information system to the Office of the Electoral Commission.

The presentation was held at the T.A.T.T.E. Building with the A.W.E.B. Secretary General, Kim Yongi-hi, handing over the project to Prime Minister, Tuilaepa Dr. Sa'ilele Malielegaoi in the presence of Electoral Commissioner Faimalomatumua Mathew Lemisio.

The presentation was also witnessed by some Cabinet ministers.

Costing US$1,030,000 (T$2,739,972), the electoral information system focuses on improving the election processes in Samoa by introducing modern technologies.

The Prime Minister said a formal proposal was submitted to the Government of South Korea through the A.W.E.B. early 2017 after discussions within the Office of Electoral Commission.

“The Parliament of South Korea approved the funding for this project towards the end of 2017, and I have the opportunity to witness some of the components of this project when I was in Seoul attending the Korea Pacific Islands foreign investors meeting.

“It became clear to me then that the technology in our elections was the way forward, modern technology that is to ensure that the standards of our electoral management is maintained at the highest level possible," he said.

Free fair and inclusive elections are keys to transparency and accountability and good governance in any country, Tuilaepa added.

“This project will play a vital role in ensuring our elections are properly managed and the process is thoroughly scrutinised by our citizens.

“The data center and backup will have a great capacity of 40,000 gigabyte - can store over a million profiles - the old data center O.E.C. only had a strong capacity of two gigabytes.” 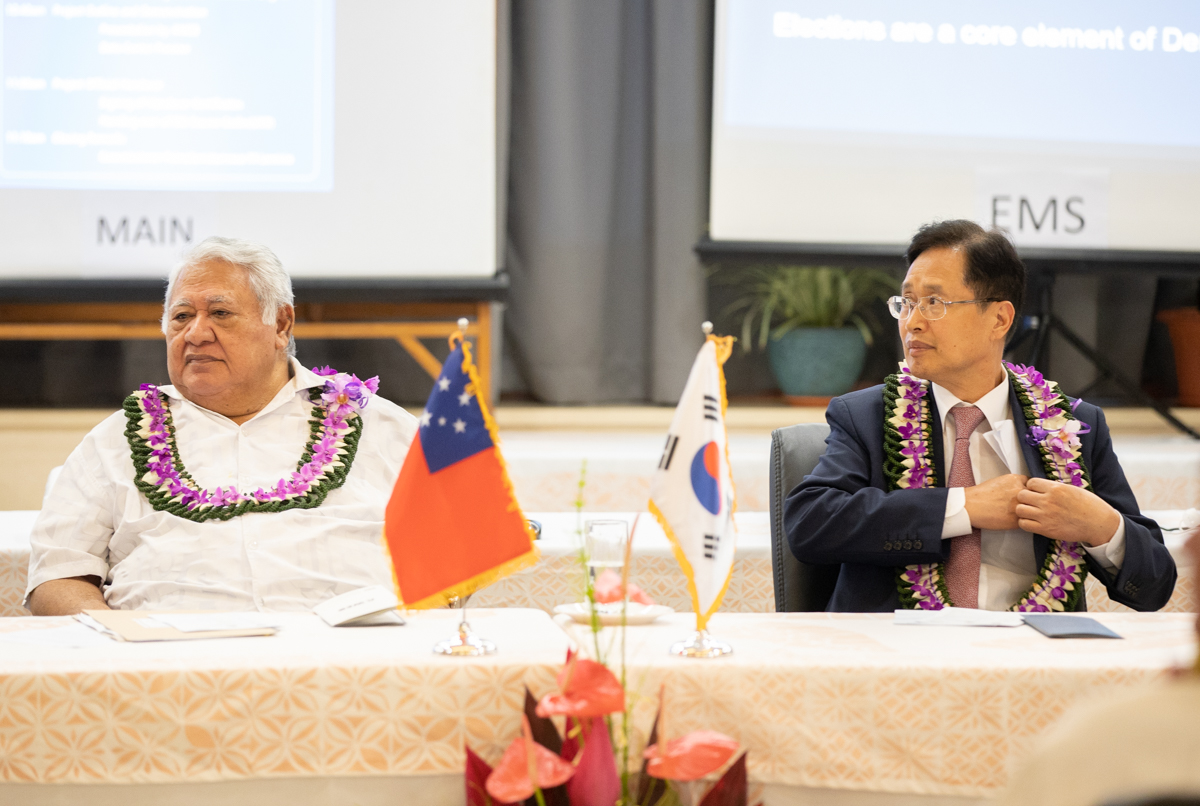 The E.I.S. will provide a platform for voters to access their details from the comfort of their own home using the internet. But this is done in a secured manner, where voters are issued with their unique identifiers where their profiles are already stored on the electoral roll with their own birth dates.

Tuilaepa said it will enable them to see their own profiles so they can request any amendments to their profiles, for example people can change their own photographs.

According to Faimalomatumua, the project is part of the overall vision of the Government to embrace digital transformation.

“The project also connects to the national Identification Card Project which the Prime Minister’s leading and I know it will make the process more convenient and secured.

“The main focus now is the electoral rolls if electoral rolls are correct then there’s less chances of corrupt practices in elections and the only way for us to ensure that is to have street addresses and house numbers so that during the census we know exactly who lives in this area and to avoid people going from one place to another to register,” he said.

Faimalomatumua said everyone on the roll now has a reference number, which will give them basic details on the electoral information system.

“Capacity building is one of the challenges we are facing in terms of the need for people with the relevant technical knowledge to maintain and operate the project but so far we have had training and in August we are sending a team to South Korea for a two weeks training on I.C.T."

When the Commissioner was asked about the possibility of anyone hacking the new system, he said the system is secured.

“When these systems were designed the designers sat down with the hackers and so hackers will hack the system and these guys will build a wall, layers of protection.

“But in saying that we cannot be complacent because technology is moving too fast and these systems are designed with a vision of 10-20 years but then that is why we have licenses and always update our anti-virus and of course it will improve and evolve in the future.

“Our system since 2005 has never been hacked before.”

A.W.E.B. is the first global organisation of election management bodies, and the membership comprises 97 organisations from 94 countries.