The Minister of Finance, Sili Epa Tuioti, has tabled the Government's $913.6 million budget for 2019-2020 in Parliament.

With the theme "a shared vision for prosperity", the Minister told Parliament that out of the Government's money plan, $583.7 million has been allocated to expenditure programmes, while the statutory expenditure is $145.6 million.

The unforeseen expenditure is $17.5 million while the development projects are $166.8 million with the overall deficit budget $87 million.

The biggest winners were the Ministries of Health ($112.1 million), Education Sports and Culture ($109.5million), Finance ($98.5 million) and Works Transport and Infrastructure ($47.1 million).

Despite revised growth projections for this financial year, the Minister said expectations are high for the current 2018-2019 fiscal year as Government’s investments divert to preparations to host the Pacific Games in July as well as the construction and completion of Apia's waterfront development and much needed road works.

“In addition to this, the current financial year also saw Samoa host the Pacific Judicial Conference, the Forum Foreign Ministers’ Meeting as well as the SAMOA Pathway review. On the monetary side, commercial bank’s average liquidity continued to improve in light of strong external inflows while commercial bank interest rates remained relatively stable. 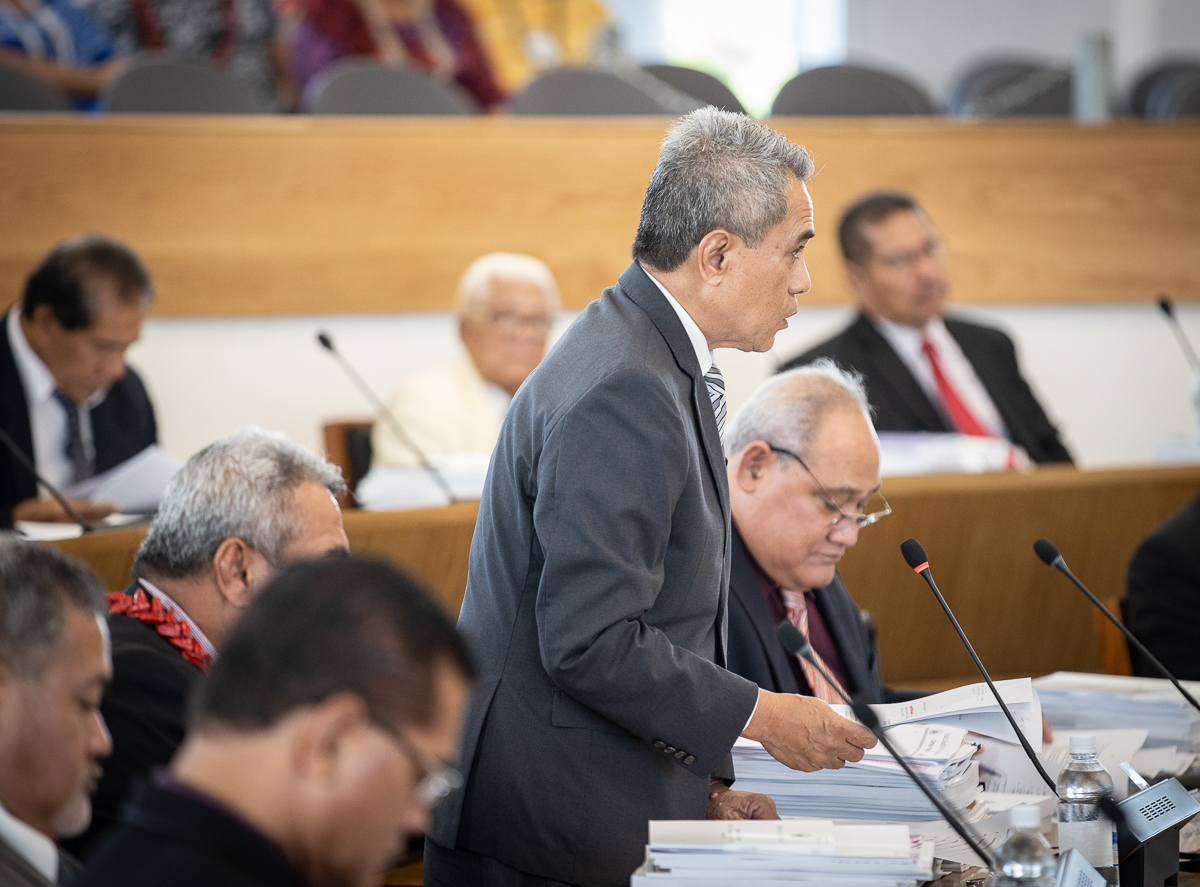 "Further, throughout the course of the past 12 months, the Government has reviewed and developed core policies for continued service improvements in the health, information technology and transport sectors, with the overall objective of raising access and quality of life for the citizens of Samoa," he said.

The story with past budgets is "consistency", with the Minister saying the Government continues to be very clear and committed to addressing the needs to improve services and infrastructure across the country, while maintaining a well-disciplined course.

The International Monetary Fund’s Article IV mission to Samoa in February and March this year, and the results of its assessment of Samoa remaining at high risk of debt distress, despite illustrating high resilience and the expectation for growth to rebound.

The Minister said the IMF assessment was based on the risks that Samoa continues to face from exogenous factors that include natural disasters and the global economy.

"It understands that should another natural disaster affect the country, our debt would again be affected as we look at immediate relief, recovery and reconstruction. In addition, the assessment noted that the financial system is at risk from the potential for correspondent banking relationships to be withdrawn. These risks are not uncommon in other Small Island States.

The Minister said over the past years, Samoa has suffered enormous physical damage from cyclones and other natural events, which led to the country shouldering a large financial burden as the Government worked to restore key infrastructure and rebuild the livelihoods of the people.

At the same time, he said the country also felt the adverse effects global economic and financial events that have required a quick and pre-emptive response from the Government to buffer the economy from these challenges.

“Given the extent of the challenges that Samoa has faced in the past, we should be proud of the way our country has responded with our resilience and ability to quickly recover as indicated by the short time it took for all essential services to be up and connected immediately following Cyclone Gita of 2018.”

In moving forward, the Government understands the need to ensure an all encompassing approach that will see the key socio-economic sectors of the economy strengthened to continue sustaining quality of life for its citizens through a longer term planning approach. This is in line with the launch of Samoa’s 2040 development plan which targets raising the economy’s growth path by focusing on key transformative sectors.

“The budgets of the past few years have prepared us for the long term objective of implementing the Samoa 2040.

“We have consolidated spending to pull them down back to pre-crisis and pre-disaster levels, we have identified and began the implementation of key revenue reforms to expand the Government’s resource base, all in the hopes to be able to support a prosperous future for our country and its people.

“Samoa continues to build resilience and buffers to ensure its sustained development and at the same time secure fiscal sustainability through its fiscal policy as the key instrument of macro management.

"In saying this, I am happy to announce that the 2019/20 budget will only register a 1 per cent deficit of GDP, 2.5 per cent lower than the current financial year.

“This target is in line with the Strategy for the Development of Samoa and supports another of Government’s fiscal targets to reduce its debt ratio target to within 40 percent of GDP (gross domestic product) therefore reducing debt distress risks.

“Further, this narrowing of the budget deficit and containment of debt will create fiscal space for the Government to respond to both natural disasters and any adverse effects of global economic challenges.”

The Minister highlighted the key components of the 2019-2020 budget is that the main estimates is expected to record an overall fiscal deficit of approximately $87.0 million.

“Accounting for Government to Government revenues and expenditures further narrows this deficit to $28.5million as illustrated within the Forward Estimates Statement that accompanies this budget ultimately establishing the estimated 1% of GDP Budget Deficit for the new fiscal year. “

“Total Domestic Revenue is expected to increase by $18.4million or 2.9 percent in the new fiscal year to be driven primarily by projected increases in tax collections in line with the anticipated economic activity generated by the hosting of the Pacific Games and other meetings as previously mentioned.”

He said the budget before Parliament underscores a Government committed to forward planning, through its ability to evaluate priorities and identify the right mix of policies to solidify a prosperous future for our people.

“It emphasizes that the Government will remain vigilant in ensuring a resilient socio-economic and financial system that will support the continuous development of its nation without compromising the quality of life of its citizens.

“It further realizes the need for longer term consistent planning that will not only raise efficiency of service provision but also promote investment and employment creation within the country.“

*Read Minister Sili Epa Tuioti's full budget address with a detailed break down for each Ministry in the Samoa Observer print edition on Wednesday 29th May 2019.