Samoa bounced back from three losses on Day One of the London Sevens to pick up three wins and win the Challenge Trophy as the ninth placed team at the tournament.

They defeated Scotland in the final 26-17 but the win wasn’t enough to stay ahead of Australia in the overall World Rugby Sevens Series standings, with Samoa now five points behind them in seventh place.

The Manu find themselves in a favourable pool for next week’s final Series tournament at the Paris Sevens though, being drawn alongside the U.S.A., Canada and Spain.

Earlier on Day Two, the Manu Samoa 7s defeated hosts England 19-24 in golden point extra time of their Challenge Trophy quarter final at the London round of the World Rugby Sevens Series.

Samoa started brightly, working the ball forward into the 22 after a few nice carries.

Siaosi Asofolau then got around the edge to score the first try of the game.

The Manu recovered their own kickoff as well, getting straight inside the 22 once again.

John Vaili showed his express pace to get on the outside and score, giving Samoa a 0-12 lead inside three minutes of play.

England finally got some possession now, and Dan Norton showed his class to make a break and advance the ball forward.

But some tremendous defence from Samoa inside their own 22 kept the hosts out, before Tomasi Alosio pinched the ball and took it up to halfway.

Samoa then turned it over themselves, and with the Manu caught short in defensive transition, England got it wide quickly to Norton who cruised in for a try.

At 5-12 with 30 seconds left in the half, England recovered the kickoff to give themselves the last chance to score before the break.

They took full advantage, with Norton, the all-time Series leading try scorer going over for his second.

Having tied the scores at the halftime break, England carried that momentum into the second period.

They made a couple of big breaks, but knocked on just 10 metres out from the tryline.

Manu winger Elisapeta Alofipo took play the other way and kicked ahead, when he was tackled late by Femi Sofolarin who received a yellow card.

But Samoa couldn’t take advantage of the extra man, and England recovered the ball and advanced inside the 22 before knocking on again.

Seeing no England players defending around the ruck, Asofolau picked the ball up and went straight through the middle, running 70 metres to score and make it 12-19 with just 30 seconds left.

But England scored with the final play, as Tom Emery stepped around some poor defence from Melani Matavao at sweeper to score under the posts and allow the hosts to tie the game and force golden point extra time. 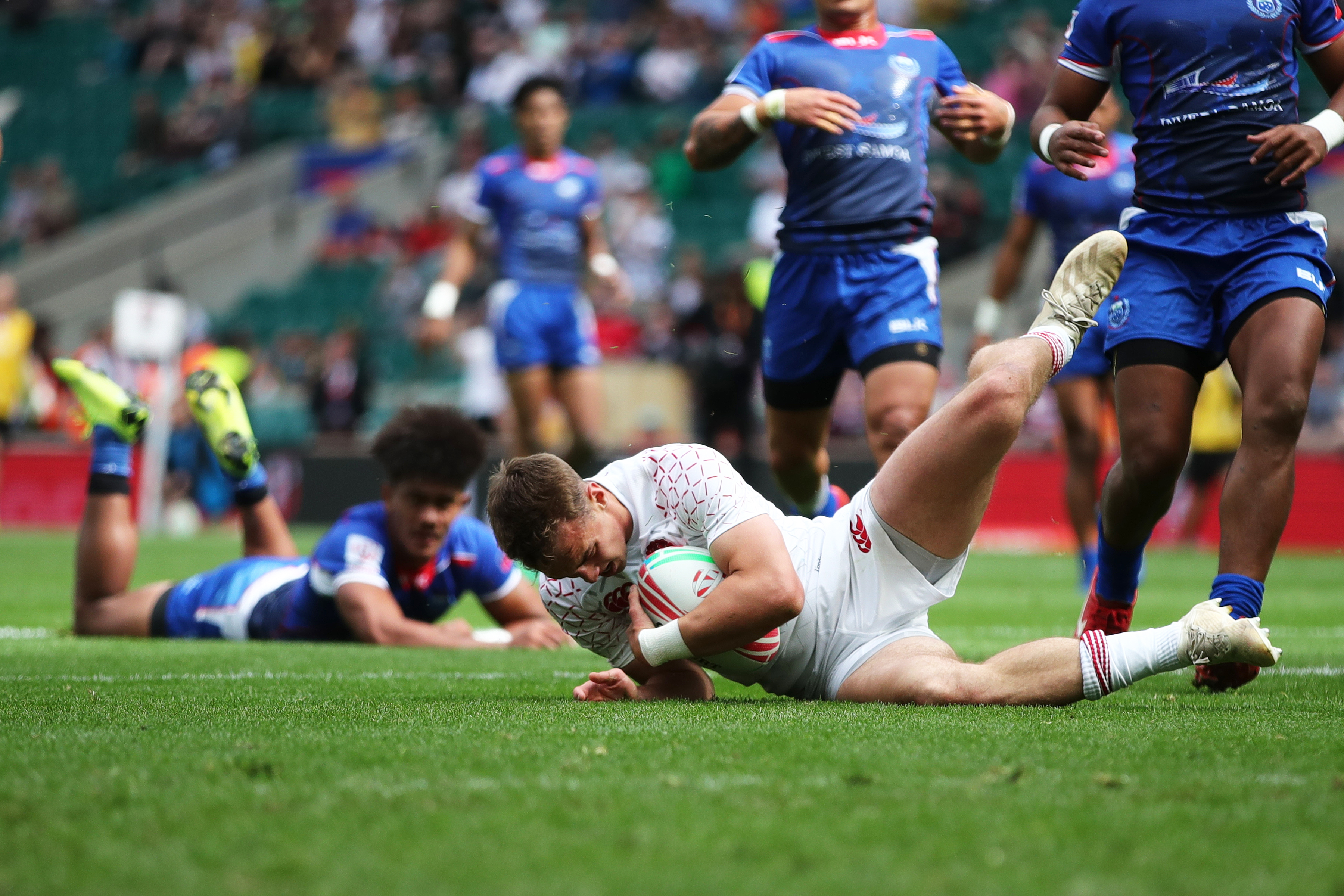 Samoa worked the ball forward from the kickoff, then Sofolarin earned his second yellow and thus a red card for a deliberate knockdown.

Joe Perez got the ball over the line for Samoa, but was judged to have knocked on in the act of scoring by the T.M.O. 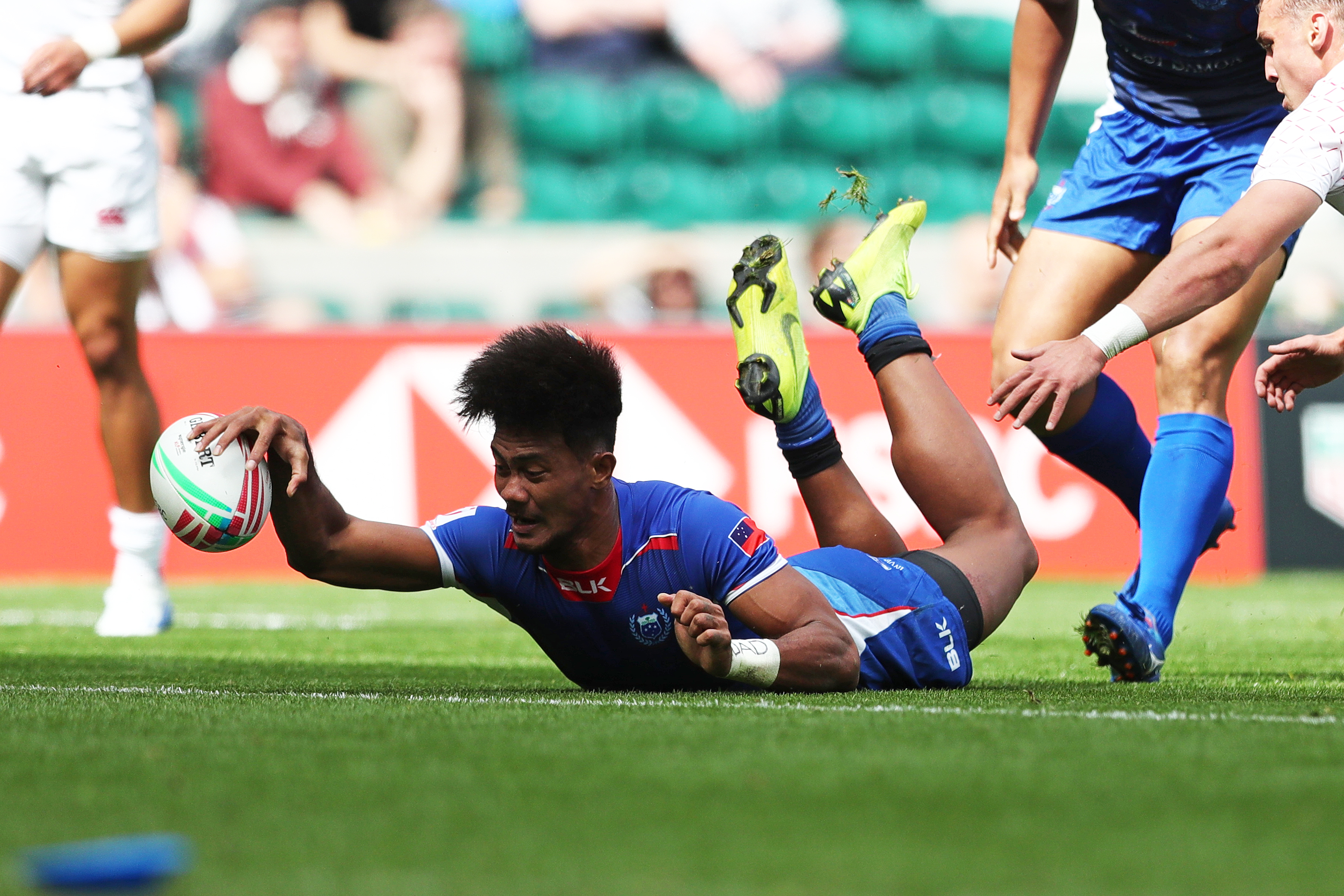 Samoa got the ball inside the 22 again and should have scored, but knocked on just five metres from the line.

They won possession back again with good counter-rucking, and Perez made sure of the win this time with a try out wide.

Samoa made one change for their Challenge semi-final against Argentina, with Laaloi Leilua coming into the starting seven for the injured Melani Matavao.

Both sides had their chances in the opening few minutes, but knocked on in attacking positions.

Then John Vaili threw a dummy from halfback, and went 50 metres to make it 7-0 to Samoa.

Tomasi Alosio was yellow carded for Samoa’s second high tackle in a row, but both teams made mistakes in the last few minutes and the score remained unchanged going into halftime.

At the break, coach Sir Gordon Tietjens was animated in addressing his team, describing the last two minutes as “woeful” and asking them to get the ball wide to Vaili earlier, believing Samoa held an advantage in that position.

Argentina patiently worked their way forward at the start of the second half, and Lautaro Bazan Velez ought to have scored but he knocked the ball on in getting it over the line.

Captain David Afamasaga made the initial break with a dummy, then spun the ball wide to Elisapeta Alofipo who scored Samoa’s second try. 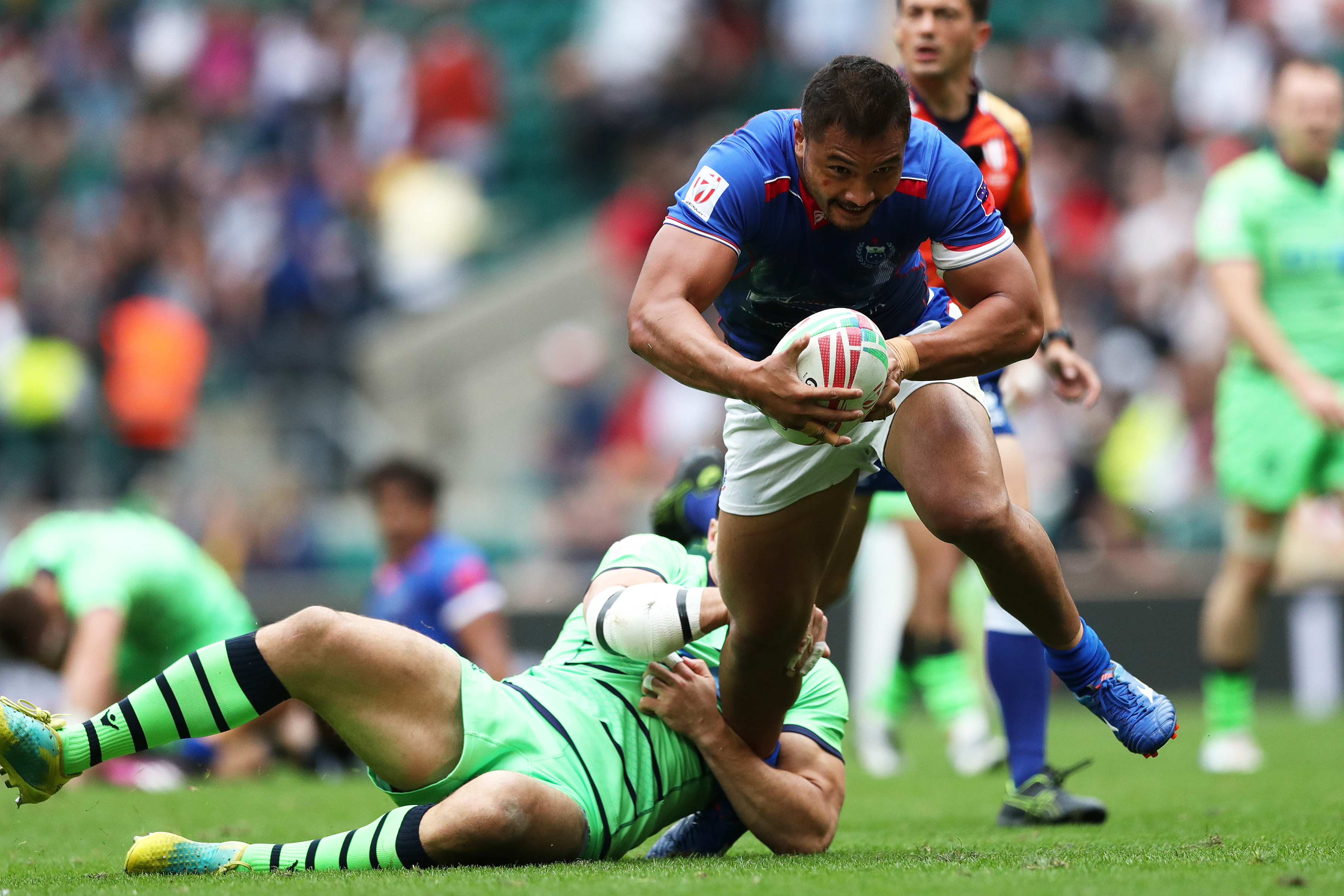 Phillip Luki got a start at forward for Samoa in their 26-17 win over Scotland in the Challenge Trophy final, with Laaloi Leilua going to the bench as Tomasi Alosio moved into a playmaker role.

The Manu 7s started excellently with David Afamasaga scoring inside of a minute to make it 7-0.

Alamanda Motuga’s yellow card in the fourth minute gave Scotland a sniff, and they scored immediately through Max McFarland.

Samoa had the final say in the half with a try to Joe Perez making it 12-5 at the break.

Nyle Godsmark scored for Scotland in the ninth minute, but Samoa bounced back with a try to Elisapeta Alofipo.

Scotland drew within two points when Robbie Fergusson scored and converted his try heading into the final minute of the match.

But Afamasaga got the game-sealing try with the final play, and would lift the Challenge Trophy in triumph after.