Attempted murderer was abusive, violent and threatened to kill Frysna Rimoni when she ended their relationship

Peter Tulaga when he visited his home at Vailoa during the crime scene visit from the panel of assessors and Judge (Photo: Vaitogi Asuisui Matafeo)

Commercial farmer, Peter Tulaga, found guilty of the attempted murder of Frysna Rimoni, was abusive, violent, jealous and had threatened to kill her when she attempted to end their relationship.

This is what the lead Prosecutor, Magele Leone Su’a told the Supreme Court during her closing submission, revealing the evidence of Ms. Rimoni which was previously untold.

Ms. Rimoni, who was airlifted to New Zealand for medical treatment, gave evidence via a video link. The Supreme Court however prohibited members of the public and the media from being present during her evidence.

On Tuesday, Magele revealed Ms. Rimoni's evidence when she argued the prosecution had proven beyond reasonable doubt that Tulaga had attempted to murder the victim.

A background of the relationship between the accused and Ms. Rimoni began in June 2018, when they met through a mutual friend during a birthday celebration. The pair became affiliated through a group called S.W.A.G. who share a common interest in farming.

At the time, Tulaga was married to his wife in New Zealand, had children and had resided with his mother at Vailoa.

The defendant took pride in his 100 acres plantation at Fiaga, which enabled him to support his mother and children in New Zealand.

At the time, Ms. Rimoni was the Finance Manager for the Pacific Forum Line, a position she held for the past five years prior to the incident. She was also the Secretary of the Institute of Accountants and was an active member.

During their relationship, Ms. Rimoni met Tulaga’s mother and his other siblings. On the 15th January 2019, the woman had left work to go to Tulaga’s home. This is where they argued and Tulaga had allegedly shot Ms. Rimoni on the face where she sustained life-threatening injuries.

Magele pointed out that despite the pair sharing a passion for farming, they fought frequently due to trust issues. She said Ms. Rimoni had confronted Tulaga, who had become obsessed and had constantly checked her phone and location.

“Peter would check her location on her phone and check if its same location to where she said she was,” Magele told the Court.

“Frysna testified that Peter was becoming overly obsessed in determining her whereabouts, and started to make accusations that she was sleeping around and having an affair with her 60-year-old aunty. His erratic behaviour had caused him to become violent against her because she refused to give a pin number to her phone.

“Peter had grabbed her by the mouth and threatened to smash the company car. Because of her position with the Pacific Forum Line she gave in to the demand.” 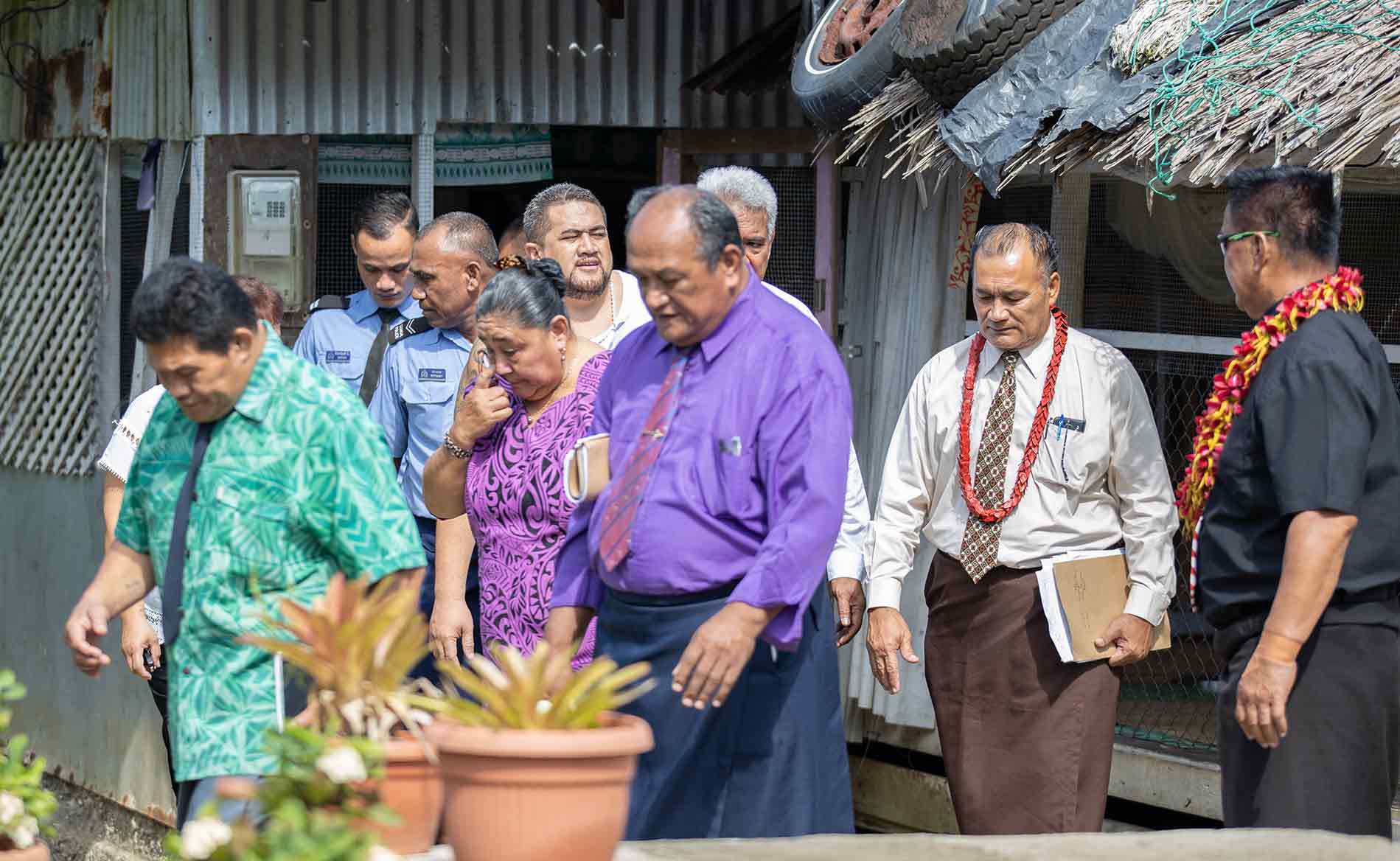 Magele made reference to evidence of when the aunty of Ms. Rimoni, whom Tulaga accused her of having a relationship with, came to Samoa with her husband and children in January 2019.

“When Peter turned up unannounced in Alafua and wondered what happened at Alafua when it was Ms. Rimoni at home with her aunty,” she said.

“Peter after an abusive tirade had reversed on the company car. This was the day prior to the fatal incident on 15 January 2019. “Frysna had to explain the dent to her Manager. Her own words during her testimony, she said he was out of control and didn’t care about her and even though he knew her position in the company, he still caused the dent on the car.

“He was out of control and no matter how she tried to reason with him that she was not being unfaithful he was convinced she was hiding something from him.

“She testified how this affected her psychologically and how she was not able to focus on her work.”

The Court heard that Tulaga would constantly accuse Ms. Rimoni of being a "lesbian," given that her Facebook photos were predominantly of her and girlfriends.

“Peter had also accused her of sleeping with her classmates that had texted to check up on her,” added the prosecutor.

On the day of the incident, Magele highlighted Ms. Rimoni’s evidence of what occurred and her testimony.

Upon arrival at Tulaga’s house, Ms. Rimoni said she could see that he was not pleased.

"I could see on his face that he was not convinced,” Magele said of Ms. Rimoni’s evidence.

“He just didn’t care what I had said. I told Peter that I wasn’t going to have any of this nonsense and I was going to leave. I moved towards the door and started to leave, and as I was going to get up to leave, he grabbed me and told me no one is getting out of this alive.

“I was scared I feared for my life. I sat right back down and started to cry. I told him, Peter you’ve hurt me so much you keep accusing me of all these things and its hurting me.

Magele told the Court that it was clear from Ms. Rimoni’s evidence, and the chain of messages between the pair, that Tulaga was the suicidal one, not the woman.

She emphasised that Ms. Rimoni was worried about Tulaga when she received messages from him saying, "I want to die".

It was the reason she went to his house on the day of the incident.

Tulaga’s lawyer, Tauiliili Harry Schuster argued there were only two people in the room when the incident occurred, and both had different versions of what happened.

He pointed out that in Ms. Rimoni evidence she did not see Tulaga pointing the gun at her, she had no memory of what happened after she sat down crying.

“Physical evidence never lies,” he said. “There is no evidence that at any time they both stood up. The only evidence is Ms. Rimoni got up to leave and sat back down.

“From the evidence of Dr. Emose, he said that he could not tell from the wounds who inflicted the injuries.”

Furthermore, Tauiliili said if Tulaga did shoot Ms. Rimoni then typically the bullet should have burst out the back of her head.

But this was not the case. She sustained injuries on the side of her face, which suggests that it is impossible that Tulaga had shot her with the position of her sitting down, said the lawyer.

He added that if Tulaga did shoot her while she was on the floor, there should have been a mark on the mattress she was sitting on.

“It is impossible to get those injuries from that angle,” he said.

“There is no part of the bullet found on the mattress. His (Tulaga) version is possible.”

In the end, a unanimous guilty decision was delivered by a five-member panel of Assessors at 5:45pm Tuesday after more than an hour of deliberation.

Tulaga, 34-year-old male of Vailoa Faleata, wiped his tears when the lead Assessor delivered their verdict.

For the other charges, Tulaga was also found guilty for being armed with a dangerous weapon and in possession of an unregistered firearm.

Justice Tafaoimalo Leilani Tuala-Warren handed down the decision on the two alternative charges.  Justice Tafaoimalo said she accepts the evidence of Senior Sergeant Tagaloasa Toddy Iosefa, that there is no firearm registered under the name of the accused. She said the document, which was tendered in Court that Tulaga had bought ammunition for a pump action shotgun in 2018, had no stamp.

“The best evidence would be the license of the firearm,” she said.

In relation to the charge of being armed with a dangerous weapon without lawful excuse, Justice Tafaoimalo said she is satisfied the charge has been proven.

“I accept Frysna’s evidence that this gun was in the room next to the accused. I accept this is a dangerous weapon and the accused has no lawful excuse to have possession of the firearm.”