GOLD COAST, Australia (AP) — Shaunae Miller-Uibo got the better of a side-by-side duel with Elaine Thompson in a rehearsal for the 200-meter final at the Commonwealth Games.

There was no gold medal on the line Wednesday when Olympic 100- and 200-meter champion Thompson and the 400-meter gold medalist met in the semifinals, so Miller-Uibo didn't require the dive across the finish line that made her one of the photographic highlights of the last Olympics in Rio de Janeiro.

The Bahamas sprinter won their semifinal race in 22.48 seconds and Thompson, who didn't run the 100, eased off to finish in 22.95.

The Jamaican got away quickly and caught Miller-Uibo in her immediate outside lane as they rounded into the straightaway. But when Miller-Uibo pushed back, Thompson appeared to let her go.

With the final 24 hours away, neither offered comment as they left the track. Shericka Jackson qualified fastest in a career-best 22.20, followed by Dina Asher-Smith of England in 22.44 and Miller-Uibo.

Without Thompson racing the 100, Jamaica had to settle for silver and bronze on the Gold Coast. Yohan Blake was also upset in the men's 100 and finished with bronze, meaning Jamaica is still awaiting a sprint gold at the games.

The Jamaicans had to settle for silver and bronze again when Amantle Montsho won the 400-meter final in the last event of the night. Montsho won in 50.15, narrowly missing the games record she set in 2010, holding off Anastasia Le-Roy and Stephenie McPherson to give Botswana top spot on the podium. It was a double for her country after Isaac Makwala won men's 400 the previous night.

One track gold the Jamaicans did get wasn't entirely expected, when Aisha Praught won the women's 3,000-meter steeplechase. Kenyans swept the medals in this event at the last two Commonwealth Games and it seemed another was on the way until Praught made her move on the last water jump and pulled away to win in 9:21. Kenyan teammates Celliphine Chepteek Chespol and Purity Cherotich Kirui settled for silver and bronze.

Praught, who trains in the United States with world champion Emma Coburn, said the Jamaicans were going to come back stronger.

Recently retired Usain Bolt arrived on Wednesday as the cheerleader-in-chief for the Jamaicans, and Praught said it would give the team a lift.

"He's been such an amazing role model, even though we couldn't be in further events from each other — you just learn from the greats," she said. "I'm glad he's here. Hopefully he can raise people's spirits."

In other games news Wednesday:

Team officials say the five boxers and three weightlifters left the Gold Coast village over the past three days, some before their scheduled competitions. Games officials say the athletes haven't broken any laws but urged them not to violate the conditions of their visas.

New Zealand's Silver Ferns lost for the second time in the group stage of the netball, which had been almost unthinkable before the games. England's 54-45 upset win followed the New Zealand's shocking loss to Malawi.

New Zealand has played in every Commonwealth Games gold-medal match — against Australia — since the sport was introduced to the program in 1998.

The news wasn't any better at field hockey, where New Zealand's men's team lost to rival Australia 2-1, allowing the Australians to finish in first place in their pool.

Australia will play Canada in men's gold medal match in the games debut of beach volleyball. Chris McHugh and Damien Schumann beat the England team of Chris Gregory and Jake Sheaf 21-13, 21-16 in the semifinals. They will play Canadian teammates Samuel Pedlow and Sam Schachter, who beat New Zealand 21-18, 21-15 in the other semifinal match.

Shreyasi Singh of India took advantage of a late collapse by Emma Cox to win gold in the women's double trap in a shoot-off.

Cox entered the final round with a seven-point lead and needed to hit only 19 of her last 30 targets to ensure gold. But the Australian fell one short to finish level with Singh with 96 out of 120 targets, and then was the first shooter to miss.

"I just had it in me that I want to win the gold medal," said Singh, who finished second in Glasgow in 2014. "I don't want to go back with another silver."

— At the athletics stadium, Luvo Manyonga of South Africa set a games-record of 8.41 meters to win the long jump.

— Kathryn Mitchell threw a games-record 68.92 meters with her first attempt in the javelin and nobody else got close, giving Australia the first gold medal of the night on the track. 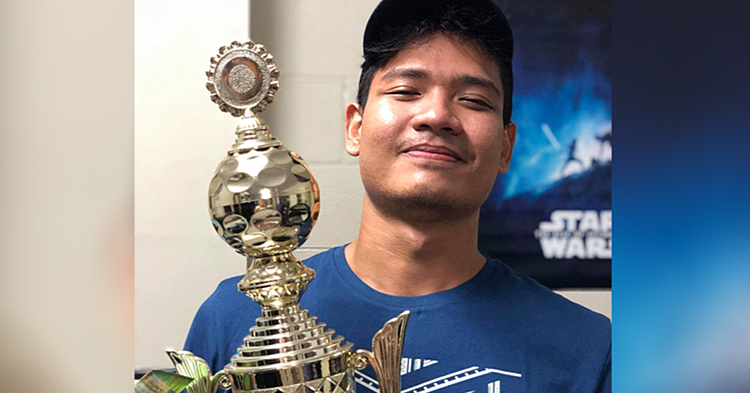