An exclusive interview with President Russell Nelson and Sister Nelson

The President of the Church of Jesus Christ of Latter-day Saints, Russell M. Nelson and his wife, Wendy L. Nelson, touched down in Samoa on Saturday afternoon. After having met the Head of State, His Highness Tuimaleali’ifano Va’aletoa Sualauvi II, the Nelsons sat down at the Pesega Temple with the Editor of the Samoa Observer, Mata’afa Keni Lesa, for an exclusive interview. They talked about how much they love the people of Samoa; they shared the love of Jesus Christ, expanded on the humanitarian work of the church, climate change, social media and many other issues. The following is the full transcript of the interview:

Mata’afa Keni Lesa (SAMOA OBSERVER): Talofa President Nelson and welcome to Samoa. Tell us why this visit is important not just for yourselves, but also for members of the Church in Samoa and the Pacific?

President Nelson: I first came to Samoa in 1976. I have had many visits between then and now. In fact it all kind of merges into one assignment that has taken me 20 years to fulfill. I love the people of Samoa, and they love the church, they love the Lord and we wanted to come and have a connection with me and my new calling.

SAMOA OBSERVER: That welcome you had on the streets when you arrived from Faleolo all the way to meeting our Head of State, how would you rate that and can you describe that reception, with all those people on the streets?

President Nelson: It was a once in a lifetime experience. I have to qualify that – I was with President Kimball in 1976 but he received a similar welcome. They declared a holiday and the people lined the streets for his entry and I never thought I would be the recipient of such a warm welcome.

SAMOA OBSERVER: A lot of people are starting to gather for the devotional you are going to have at Pesega. What is your main message, not just to Samoa but for Church members of the Pacific?

President Nelson: The main message everywhere we go is to come unto Christ and receive his blessings in your life. Everyone has a choice, either to choose to follow the Lord Jesus Christ or to choose another path. As his disciple I invite people to come under Christ because he will make life better for you. 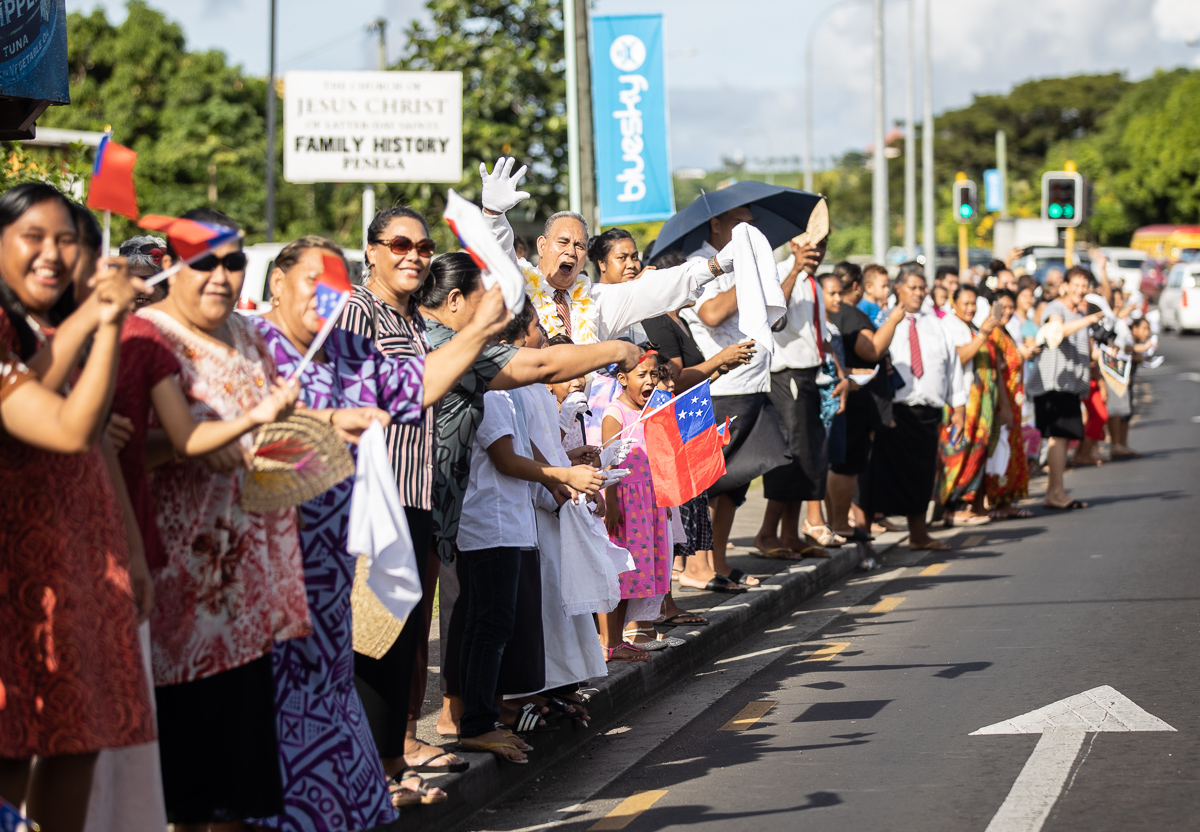 SAMOA OBSERVER: The L.D.S. Church is perhaps one of the fastest growing churches in the Pacific, including Samoa, why is that in your opinion?

President Nelson: We invite people, and they choose to come or not to come. Actually the Church is growing all over the world and when I was called as an Apostle in 1984, the Church membership was 5.45 million. In those 35 years the population has tripled so Samoa’s curve is about the same as the other nations. It’s accelerating everywhere.

SAMOA OBSERVER: In this part of the world, the public face of the L.D.S. Church is its humanitarian work. Can you talk a little bit about that, and can you tell us what drives the humanitarian work of the church?

President Nelson: Let me correct you, it’s not the L.D.S. church. It’s the Church of Jesus Christ of Latter Day Saints. I make that correction because we are humanitarian because Jesus taught us to be a caring people. So wherever we go, whatever the country is, we are caring for the needs of the people. I remember in the year 1992, when Samoa was hit by Hurricane Val, we saw palm trees like matchsticks on the road, and many homes and schools and churches had no roof.

Our humanitarian aid was about the first that came in here in Samoa to help out. It could be anywhere. We are helping the children of Yemen right now, nobody knows about it because we don’t like to talk about the good things we do but our people are generous. They contribute freely to the humanitarian needs of other people. When box loads of supplies come in there is not one box that is labeled for Church members only. They are for everyone.

SAMOA OBSERVER: Speaking of those calamities, in this part of the world one of the biggest issues our people are confronting is climate change. You talk about Cyclone Val, the frequency of cyclones is becoming more and more. Do you think the church has a role in finding the solution to climate change? And if it does, what is that role? 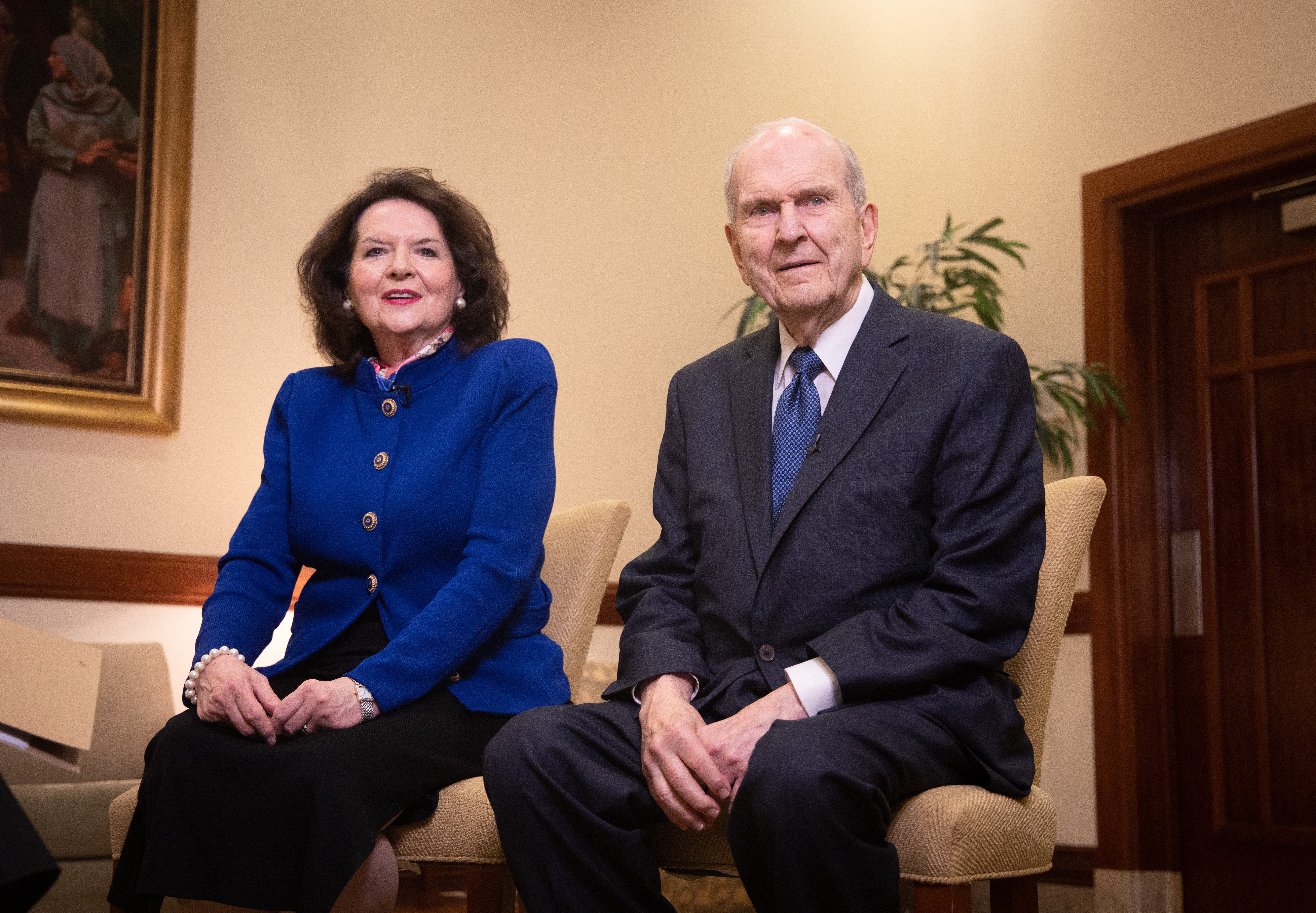 SAMOA OBSERVER: We live in an interesting time, one defined by many challenges brought about - by the onset of social media, sexuality and issues of identity. Young people are vulnerable, confused and some are lost, do you agree that the degradation of family values is a major contributing factor? What is your church doing in response?

President Nelson: The media change has been a great blessing. The changes in communication and transportation have all been explosive in the last century. And of course, people can misuse any blessing. I regard it as a blessing. When I typed my PhD thesis, I’d introduce more errors every time I would type a page than I was correcting and that is a thing of the past. Of course there is a lot of abuse. And I try to tell the young people who maybe spending a little too much time with their social media, take a break from fake. Learn to talk again.

SAMOA OBSERVER: There is a lot of political correctness now where I suppose people are saying that in public mediums you shouldn’t talk about your religion and your faith. What will you tell the young people not just of Samoa but of the Pacific, the world, to encourage them to share the gospel and the good news of Jesus Christ without being ashamed and the risk of being bullied online?

President Nelson: Truth is truth. And I learned a long time ago not to compartmentalise truth. I remember one of my colleagues criticised me once for injecting my religious feelings with my Scientific training, background and research. And I said well I can’t separate one half of my brain from the other half. What’s true is true and I will speak up for it. 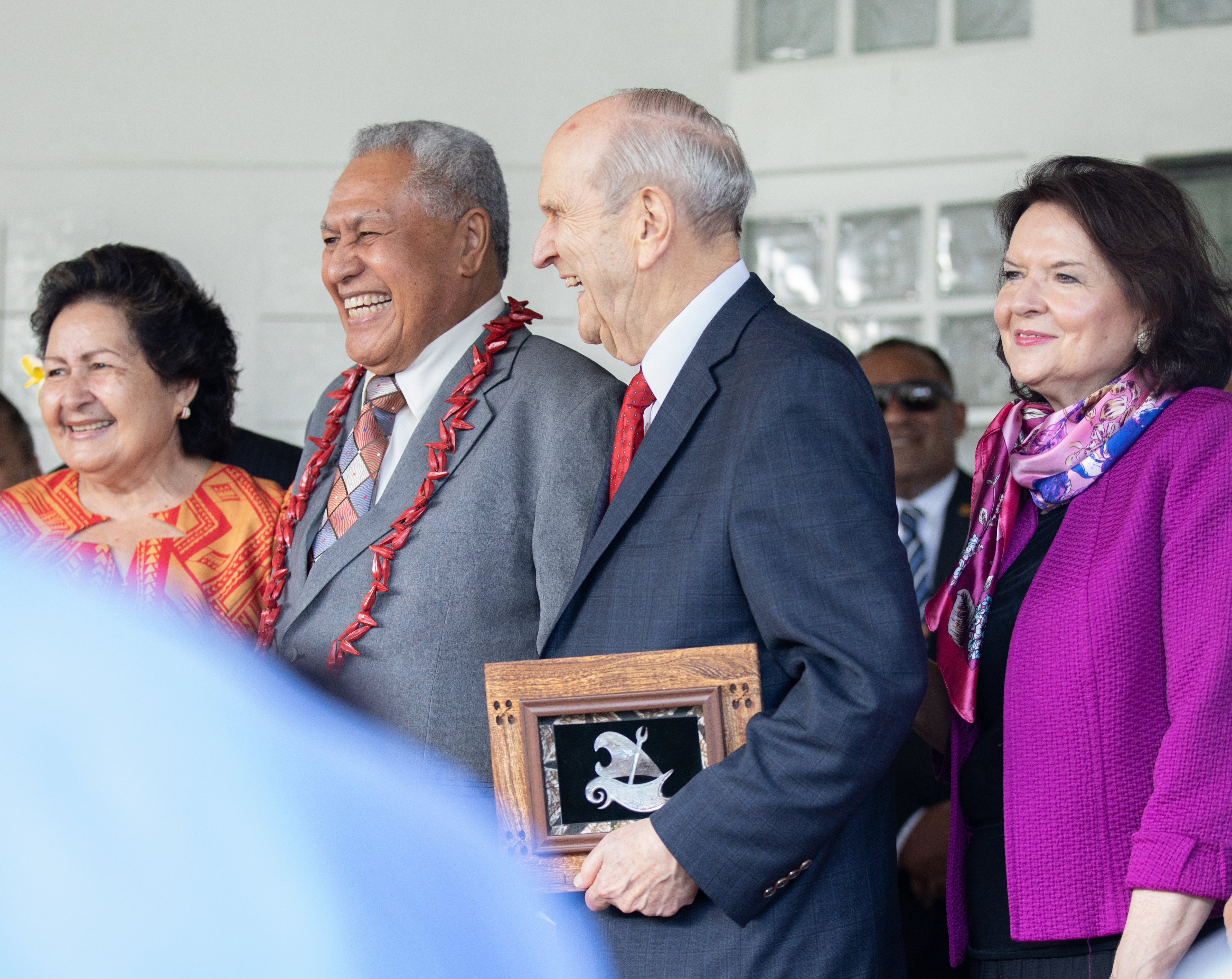 President Nelson: In 1976 I was asked that same question in Samoa. I answered it then as I would answer it now. There is something divine about our ancestors. And we all yearn to know more about who they were and what they did for us. With us it is a religious principle, because we know that life can be preserved in perpetuity and we will be reunited with our ancestors so it would be nice to say hello by name.

President Nelson: Well I feel well. The Lord blesses me and wants me to do work and I am working.

SAMOA OBSERVER: Sister Nelson, what do you think of Samoa from what you have seen so far?

Sister Nelson: Well I have been here before, and we love it. It has an ‘at home’ feeling. I am from a small town in Canada actually. We of course in Utah have lots of Samoan friends and I love the north shore of Oahu where there is lots of Samoans there. I love it here. We were here in 2014 and then we were here in 2007.

SAMOA OBSERVER: Empowering women is a term we hear quite often and in many cases, the church is blamed for instilling outdated values they say depower women. What do you say about that?

Sister Nelson: I say that Jesus Christ is the best advocate for women that ever lived. So to be a member of his church, The Church of Jesus Christ of Latter Day Saints is to be a woman who is the most liberated of any women on earth. Because we have access to his covenants, his commandments, his power.

In The Church of Jesus Christ of Latter Day Saints, women actually do all the things it requires a minister to be ordained in other churches. We pray over the pulpit, we preach doctrine over the pulpit. We teach men and women gospel doctrine in many settings. At least half a million women right now are leading organisations for women for the young women and for all the children. To be a member of the Saviour’s church is to be a liberated woman, it’s really quite amazing. 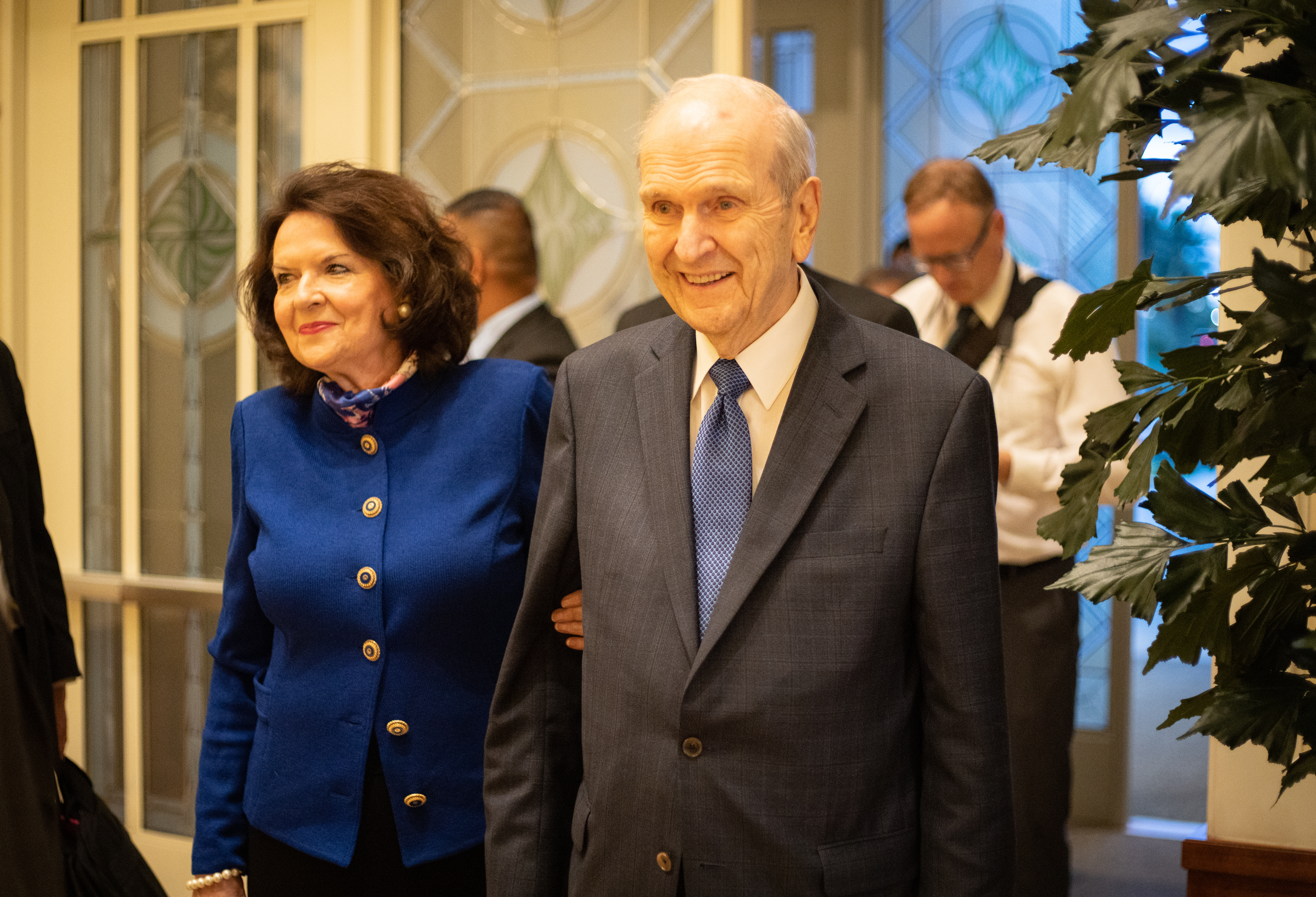 SAMOA OBSERVER: Domestic violence and violence against women are major issues in this part of the world. What is your message to the men? And on that note, what will your message be to women who are victims and suffering?

Sister Nelson: To the men I would say stop it. To the women I would say never allow it, because we can get into all sorts of escalating cycles. I actually was a Marriage and family therapist for 30 years. The church has a zero tolerance policy when it comes to any kind of abuse; abuse of women, of children. Women sometimes abuse their husbands as well.

But it’s time to again learn how to control anger, to learn anger management if that is a problem for the man. Again, it is for the woman to protect herself first of all, to make sure she is safe and to make sure that all, I guess we first of all is to break the conspiracy of silence. That’s the first thing, because if you don’t talk about it then you can’t get the support. To anyone in that situation, speak up, speak out.

SAMOA OBSERVER: Education is critical in the lives of people. Can you talk us through some of the work the Church is doing to promote education? In Samoa, the Pathway programme is probably extremely relevant to many of our people who otherwise would not be able to afford higher qualifications. Can you tell us more?

Sister Nelson: Yes – one has access all over the world, right out of BYU Idaho. My understanding is that anyone in the world can access that online for minimal tuition. If they for one year complete those courses and maintain a B average they can then complete their degree from BYU Idaho, again, online for minimal tuition, as though they had actually been on campus. Access to further education is what we believe. I love what my husband says, and that is that education for us as members of the Church… is a religious responsibility.

Our Heavenly Father has this amazing plan, which we call the plan of Happiness, but it’s happy because we are all progressing. And our spirits long to learn, they long to progress. That is in fact when people get depressed, when they are not moving forward. We believe in education. For myself, I have a doctorate in marriage and family therapy and gerontology. I started out in nursing, I loved psychology, etc etc. we believe in education, absolutely.

SAMOA OBSERVER: Anything else you wish to speak about?

President Nelson: Just convey our love and gratitude to the people of Samoa.

SAMOA OBSERVER: Thank you for your time President Nelson and Sister Nelson.

The Nelsons: Thank you too. It’s been a pleasure. 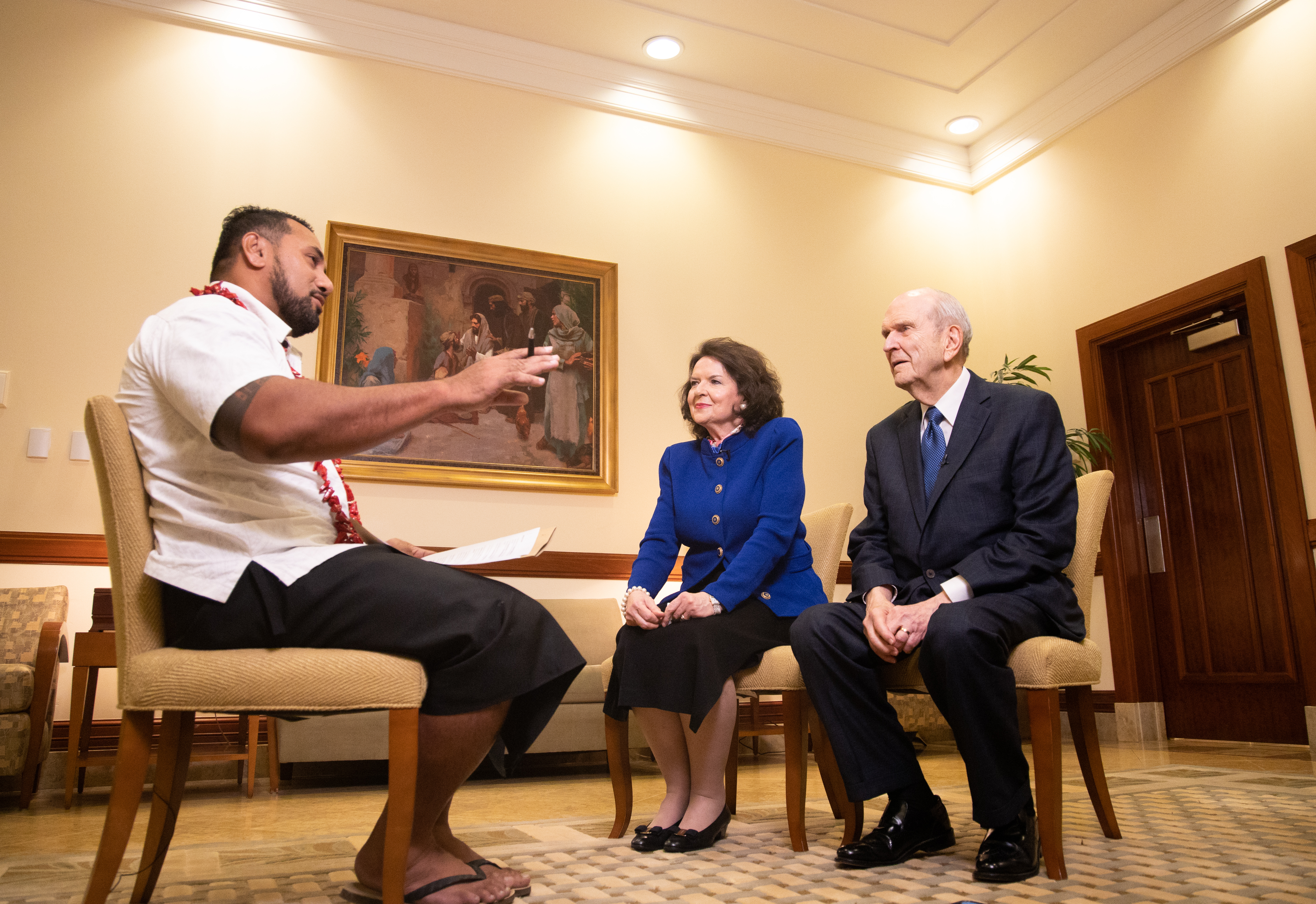