A ballistic expert from New Zealand gave evidence in the Supreme Court on the firearm that was allegedly used in a disagreement that resulted in a woman being hospitalized with substantial facial injuries.

Peter Tulaga is charged in relation to the incident for the attempted murder of Frysna Rimoni.

He is represented by Tauiliili Harry Schuster and Maureen Tuimaleali’ifano.

Senior Forensic Scientist for E.S.R. company in N.Z., Angus Newton is specialized in forensic for firearms such as rifle, shotguns and pistols.

He identified the alleged firearm as a 12 gauge break-open action shotgun, a Stevens brand was examined.

In his evidence, Mr. Newton said he examined the firearm on Wednesday this week together with one fired shot shell and a sample ammunition for the shotgun to conduct his investigation.

The expert was asked to determine if the empty shot shell had been fired by the break open action shotgun that is alleged to have been the firearm used in the offending.

“I fired the test shot shell from the gunshot and compared it to the empty shot shell to see if it was shot from that shotgun,” he said.

“In order to make the comparison I used a comparison microscope to examine the two shot shells side by side.

“In my opinion that shot shell was fired from that Stevens shotgun.

Mr. Newton was also asked about the possibility of the ammunition being shot from another shotgun.

In response he explained considering the possibility of the shot shell being shot from another shotgun it is very low probability.

Lead prosecutor Magele questioned Mr. Newton if its possible that a person can self-inflict using the Stevens shotgun.

In response, he said it would be difficult for a person who has a short arm to do so.

He added as opposed to someone who is taller and has a longer arm it is possible.

A pump action shotgun was also tendered in Court for evidence.

One of the differences that the expert identified is the Stevens shotgun can only take in one ammunition at a time whereas the pump action shotgun it can load several ammunition.

During cross examination, Tauiliili put it to Mr. Newton if it’s possible that a person can self-inflict using a different pump action shotgun that is shorter at length.

“Yes you can because of the short length,” said the expert.

Next to take the witness stand is Senior Sergeant Tagaloasa Toddy Iosefa.

Making reference to police record, Tagaloasa confirmed that the Stevens shotgun is not registered nor is it licensed.

He told the Court the only firearm that was registered under Tulaga’s name was a pump action shotgun.

“There was a firearm under Peter Tulaga but that firearm (ownership) has been transferred to Aiono Paepae of Fasito’o-uta in 2016,” said Tagaloasa.

“A (shotgun) barrel that is less than 12 inches is not allowed. It would be unlawful (shotgun).”

The Senior Sergeant was also asked to give his opinion on the impact of the Stevens shotgun if it was shot from a close range of five meters.

“If it’s a watermelon used to compare, it would be deadly and destructive,” he said.

During cross examination, Tauiliili put it to Tagaloasa that Tulaga bought ammunition for the pump action shotgun in 2018.

He presented a form from the Police that is used by users to fill in and present to dealers of ammunition before they are able to buy ammunition. 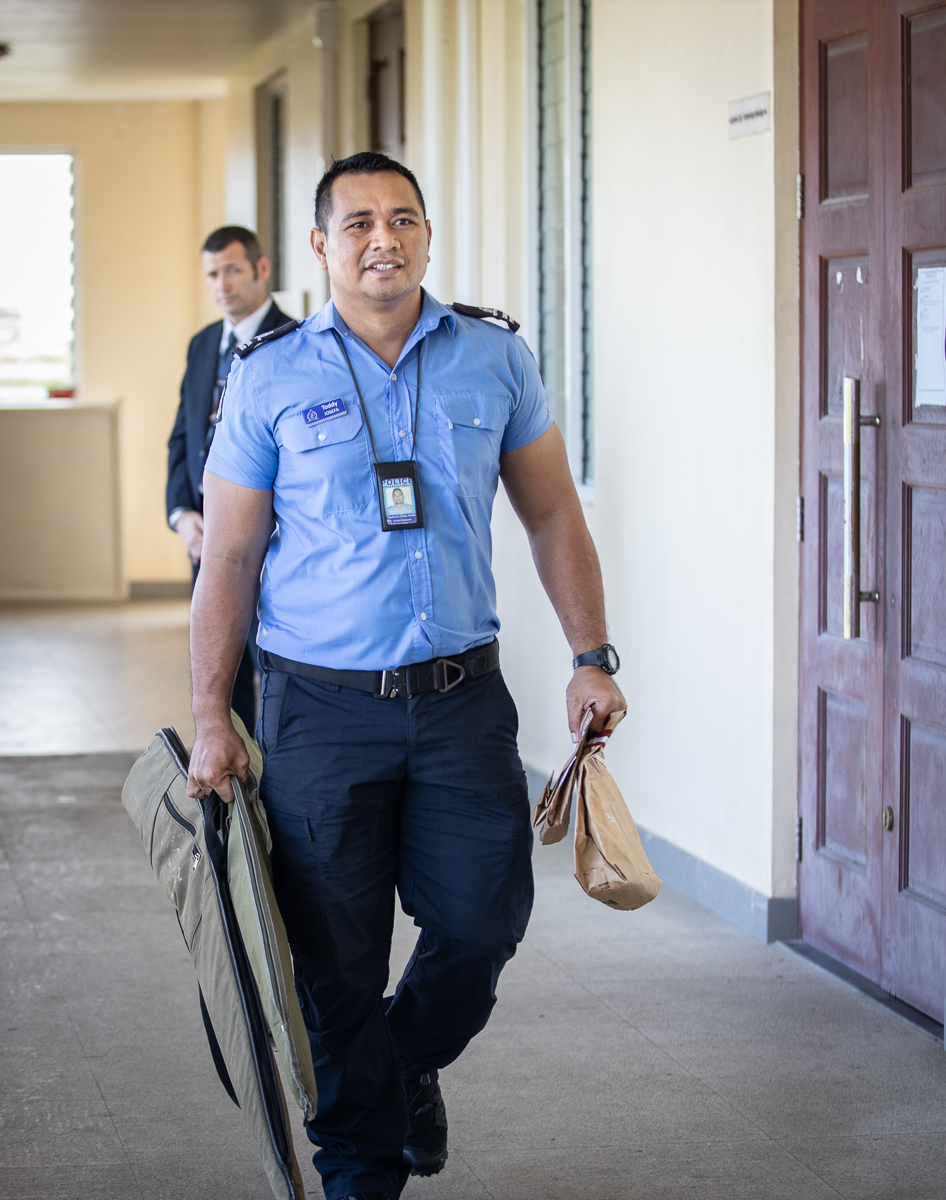 Tagaloasa maintained that the records indicate that the 12 gauge pump action shotgun belong to the defendant was transferred to someone else in 2016.

He explained that a person cannot buy ammunition without presenting license and the permit form to the dealer.

When the form was given to Tagaloasa he said the digit on the form suggests that it could either be 2016 or 2018 because it is unclear.

“The form does not have a stamp on it which and that stamp would have a date of approval on it. Without the stamp the form is invalid.”

Dr. Emose took the stand to be cross examined by Tauiliili.

The line of questions from the defense lawyer asked Dr. Emose if he was able to tell from the injuries sustained by Ms. Rimoni if it was inflicted by a third party of self inflicted.

“No I cannot tell, I can only tell it was from a shotgun,” said Dr. Emose.

Tauiliili also put it to the surgeon that he could also not tell from first instance if the laceration on Ms. Rimoni’s face was sustained from a shotgun or a sharp object.

In response, Dr. Emose said from initial examination he could not tell it was from a sharp object because “she had a smashed face” on arrival to the hospital.

He added that he cannot tell by looking at the laceration on the wrist of Ms. Rimoni if it was caused by her falling on a broken glass or how she sustained the injury.

The hearing which was initially scheduled for four days has been extended until next week.

Prosecution is calling more than 30 witnesses in the case.

Six-year-old's haircut raises over $5000 for cancer

Robert Esekia Manu is just six years old, but has galvanised over 40 friends and family members to raise $5100 for the Samoa Cancer Society (S.C.S.) this year - just by having his hair cut.