Electricity supply was interrupted Thursday evening when a high voltage electricity pole fell on the road in Matautu.

According to eye witnesses, the incident happened a little after 5:30 in the midst of busy traffic with many rushing home from work.

One eye witness, who identified herself as Pisaina, said the electric pole fell unexpectedly.

She denied reports that a car had crashed into it.

"That was the initial Electric Power Corporation (E.P.C.) Facebook post said," she said. "But it wasn't true.

"On our way home on the Fagali'i bus, right on the bend on the road in front of KK Mart at Matautu, there was a woman that waved down the bus.

"However not even a minute the woman was on the bus; the pole just collapsed right behind the bus. We saw the pole fall with wires being disconnected as it fell," she said.

Fire and Emergency Services as well as the Police and E.P.C. were quick to the scene to ensure no one was hurt. 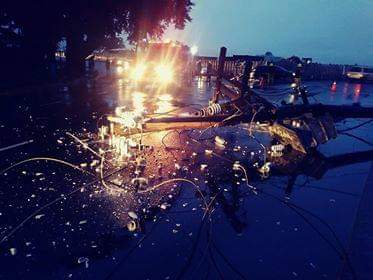