At 84-years-of age, Brother Humphrey O’Connor has dedicated 67 years of his life to teaching.

For most of those years, he devoted his time to thousands of students in Samoa, from St. Joseph's College and the Marist Brothers Primary School. He has even taught the grandchildren of some of his former students.

And while his passion and commitment to education is still there, the deteriorating condition of his eyesight has forced his departure from Samoa.

Br. Humphrey was diagnosed with age-related macular degeneration - a medical condition which could result in blurred vision in the center of the visual field.

He was diagnosed during one of his trips to the Tupua Tamasese Meaole (T.T.M.) Hospital at Moto’otua last year, where he was provided with photographs of his vision, which were then presented to eye specialists in New Zealand.

“They (specialist in N.Z.) told me that those photos your people in Apia gave are top quality, and it impressed the Kiwi doctors,” said Br. Humphrey in an interview with the Samoa Observer.

“They may not be able to treat it here but they sure know how to diagnose it and they deserve to know this. The treatment is I have to get injection once in six weeks and I have to get it done for the rest of my life. I have to go back to New Zealand to get that.”

Br. Humphrey said he was told to return to Samoa to say his goodbye, before returning to New Zealand for good, where he will undergo treatment and teach at another school. 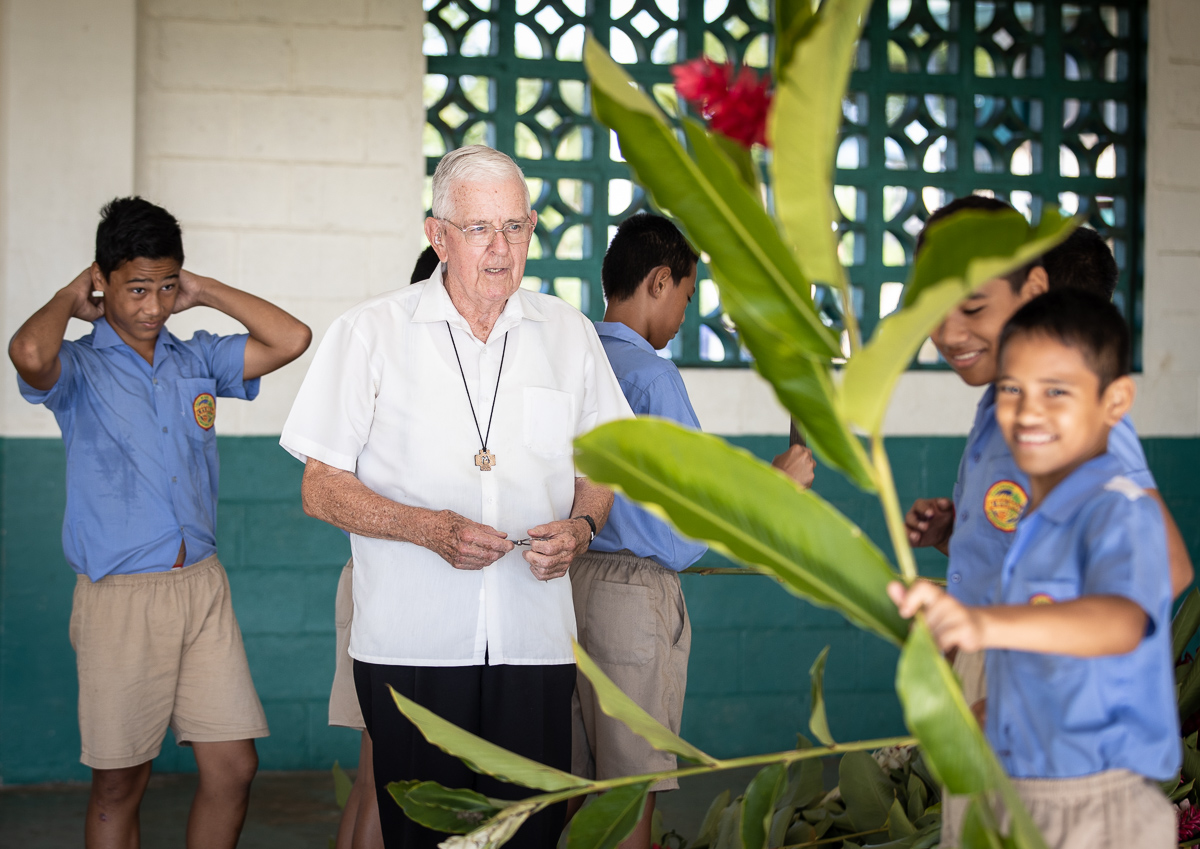 And even though he is sad to leave Samoa, he is content that he will still continue to teach at the Marcellin College in Auckland, where he has taught in the past.

“While I am sad to leave, but it is not the end,” he said with a smile.

Br. Humphrey’s journey to Samoa started when the Head Brother in Auckland, New Zealand at the time sent out a circular inviting any brother keen to teach in Pacific Island schools.

He decided to put his name forward and got the okay.

Br. Humphrey took the Pan American plane from the then Auckland military airport at Whenuapai and took a six-hours flight to Nadi, Fiji. After the stop-over in Nadi, he took another flight to American Samoa. Lastly he flew on a 10-seat plane from Tafuna Airport to Faleolo International Airport.

Upon arrival he was welcomed by Br. Ronald. Br. Humphrey — who enjoys traveling and had traveled around N.Z. before he left the country for the first time to come to Samoa — said his family was equally happy that one of them was going to a Pacific outpost.

“I came from Pukekohe and my family gave me every encouragement,” he said.

“Mum didn’t burst into tears and say she will never see me. We kept in touch every now and then through aerogram.”

Back in the 1960s and during World War II, sending aerograms were very popular, due to it being a lightweight piece of foldable and gummed paper in a self-sealing letter card.

Br. Humphrey said it was cheaper than sending a letter in an envelope and he kept in contact with his family on aerogram.

Recalling the day he first arrived on the island, Br. Humphrey said he arrived at the time Samoa had celebrated Independence Day in 1962.

He remembered the two Head of State, the late Tupua Tamasese Meaole and the late Malietoa Tanumafili II, making an announcement on the radio a few nights before 1 January, 1962.

“They (former Head of State) were saying that we have a lot to be thankful for, and I want you to go to your churches from 11 to midnight on the last day of the year to thank God for our independence. 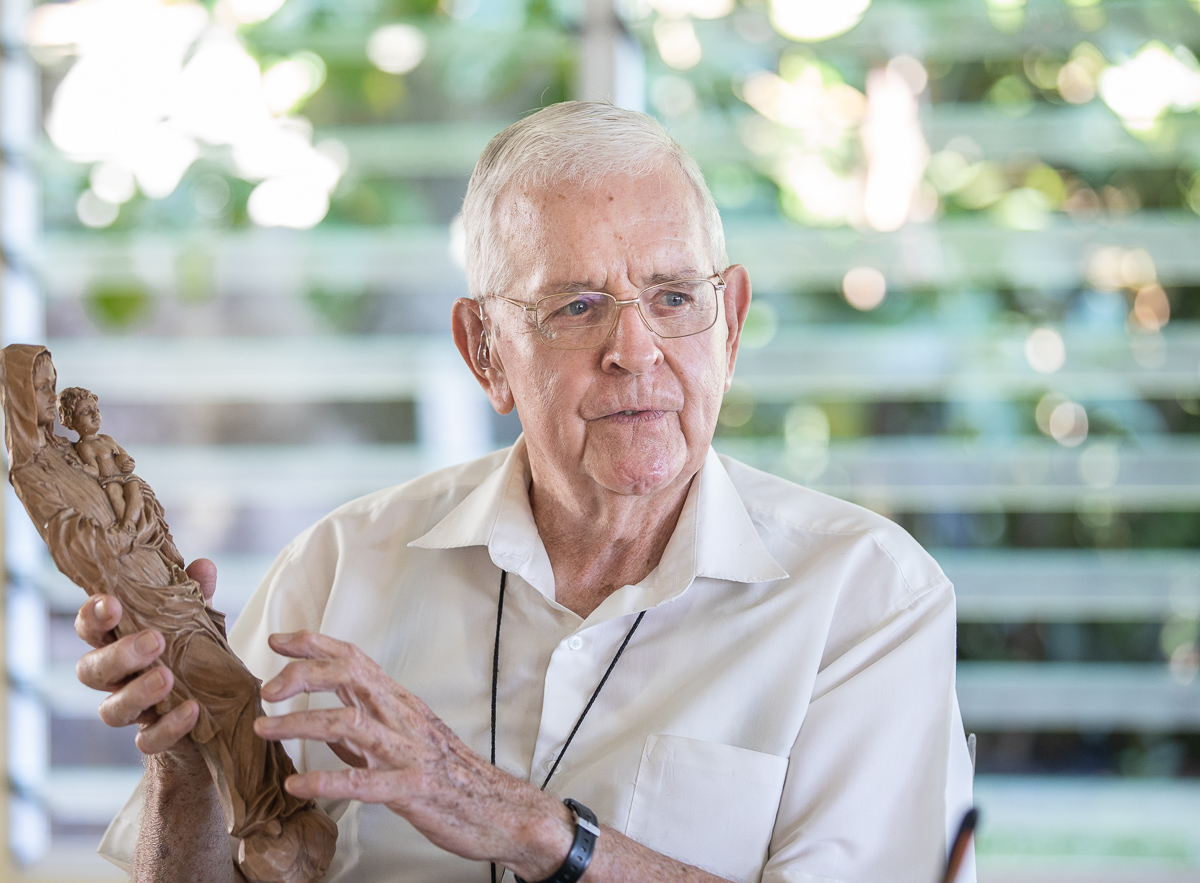 “It was terrific and people did that. It was fabulous and wonderful and that was the mood I walked into.”

A great memory that Br. Humphrey remembers at the time is the support from the brothers and the boys from St. Joseph's College.

“I remember how hard working and how willing they were to work hard and to work with their teachers with fairly basic conditions but those boys accepted that,” he said.

“When asked for a hand with building and cleaning the grounds they lend that help and that developed a good spirit of work and friendship among themselves and the brothers.

“It was a great atmosphere.”

After teaching at the school for some years in Samoa, Br. Humphrey was called back to teach in New Zealand. When he returned he taught at the Marcellin College, Kataia Primary School and had cared for the elderly brothers in Auckland.

Despite going back to familiar grounds of New Zealand, the 84-year-old said he was always keen to come back to Samoa.

In 2015, the Marist Head Brother in Auckland told him that perhaps it was time for him to retire from teaching.

“I said no please, that is not a good prospect for me,” he said.

“The Head Brother then said to me how would you like to go back to Samoa to help out with students with reading challenges in which I was happy with that.”

When he returned, he helped out with Br. Bernard on teaching a small group of boys for 40 minutes in the morning with their reading, and retired from work during lunchtime.

One of the challenges that Br. Humphrey sees in the schools during the years he has taught in Samoa, is the low wages that the teachers are paid.

“(One of the challenges) it is probably the fact that we are constantly struggling to get sufficient funds to pay the teachers with the pay they deserve,” he said.

“If we put the fees up a lot of boys would not be able to afford to go to school.

“But we have never turned a boy away because there family could not pay and our fee was $100 tala.

“And if you put the fees up perhaps the boys that need education the most are going to miss out.

“But what makes a huge difference in that is the fact that it’s been a huge plus with me to be with a group of teachers here, 25 women and about eight men who are so devoted to their work.

“I often ask them how come you stay here when you can get bigger salary from the state school and much smaller classes.

“It is great to hear them say because we like the atmosphere. It’s something to do with the Marist spirit and you can feel it.”

Br. Humphrey said the Marist spirit is powerful and it is bringing a mother’s caring attitude to dealing with all people, especially children.

Those in the Marist fraternity often utter the word Marist spirit but what does it mean?

In explaining what Marist spirit means, Br. Humphrey said it is an attitude of what mothers are good at.

“Mothers do not get uptight by passing little problems and they are forgiving and always there when you need them,” he said.

“They are not interested in getting medals or cash donations for being good mum’s. They are interested in full human grown for their sons - that is what we see in Mary.

“It is a reminder to try and treat children the way Mary treated her son (Jesus Christ).  It is about bringing that motherly spirit with dealing with all people especially the young.

“If you are all heavy on them they will fight back and Saint Francis was right, he says you will get more flies with a spoon full of honey than a barrel full of vinegar.”

As he prepares to leave Samoa on Sunday night, Br. Humphrey said he will miss the daily mingling with the teachers and the people.

Before he leaves, he printed photos of some of the teachers he had captured on camera, with a special note of encouragement on the back.

Taking photos was always something he liked to do on the side and will keep them for memories during his journey in Samoa. 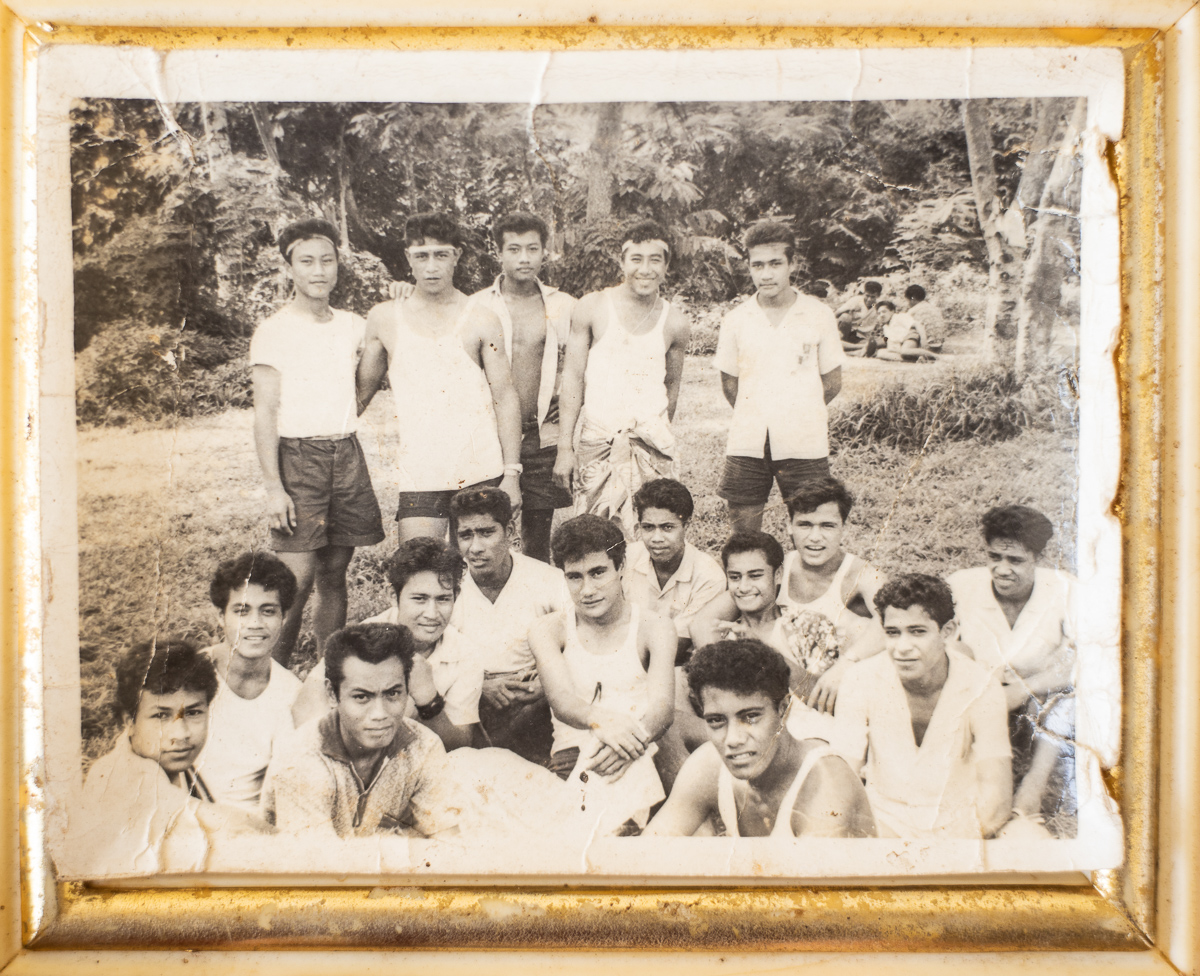 On Thursday one of the former students, Le Mupoao Ata Maia'i, went to see Br. Humphrey to show him a photo he had taken in 1965 when he was a student at St. Joseph College.

Le Ulupoao had kept the photo which was taken after athletics on the year and wanted to tell Br. Humphrey its significant to him.

“It was connection to the past and Brother took that photo and had given me a copy of it days after he took that,” he said

“It is a reminder of our past and Brother had a collection of photos from different places in the 1960s.

“He is a very good teacher and had dedicated his life together with other brothers to teach Samoan boys and that is very special.

“We are like a family and we value the Brothers contribution in teaching the boys.”

Before Br. Humphrey flies out of Samoa, he had a few things he wanted to say before he does.

“I am 84 years old and I hope to teach for some years and I feel I am in good health to do this,” he said.

“I am very fortunate in my age that I can still enjoy teaching. I believe that teaching young people keeps you young.

“I have learned far more from Samoan people than they learned from me and I am sure we have all enjoyed all of it.

“I will remember the very warm Marist spirit that energised them and energised me.

“That is what I will miss the most and the very warm friendliness of the old boys who often see me on the street and always say hello.

“Samoans have a very great gift of welcoming people and their hospitality. They are wizards at that and I will miss all of that.”

The Marist Brothers Old Pupil Association hosted a farewell for Br. Humphrey on Wednesday night at the M.B.O.P.A. lounge at Alafua.