Children, travelers, hotels get together to off-set carbon emissions from flying

Samoa Conservation Society's James Atherton explaining how the trees planted on Friday will grow two metes per year, and reach mighty heights like the ones behind him. Samoa has the best rain and sunshine for tree planting too, he added. (Photo: Misiona Simo)
Climate Change

Just before Samoa settled down for the long Mother’s Day weekend, a crowd of nearly 40 people, including 20 school children gathered in the shade of the Vailima National Reserve.

They were a mix of volunteers, students, and working professionals. Some worked in the retail sector, some in conservation, and some even came from Sinalei Reef Resort and Taumeasina Island resort during their workday.

But everyone was in Vailima for the same reason: plant 1200 trees, help reforest the national park, and offset over 100,000 kilograms of carbon, pumped into the air from 46 flights to Suva from around the Pacific.

The flights were for Young Pacific Leaders, headed to Suva for an upskilling and brainstorming conference. Three of them flew from Samoa and returned ready to not only deliver innovative programs to the Samoan community, but also empower others to make positive changes too.

For Christine Tuioti, Nathan Chong-Nee and Michael Dyer, the first way to do that was to invite everyone to help them offset the carbon from their flights to Suva for the YPL conference. And once they were all out there, it took just an hour to plant the trees. 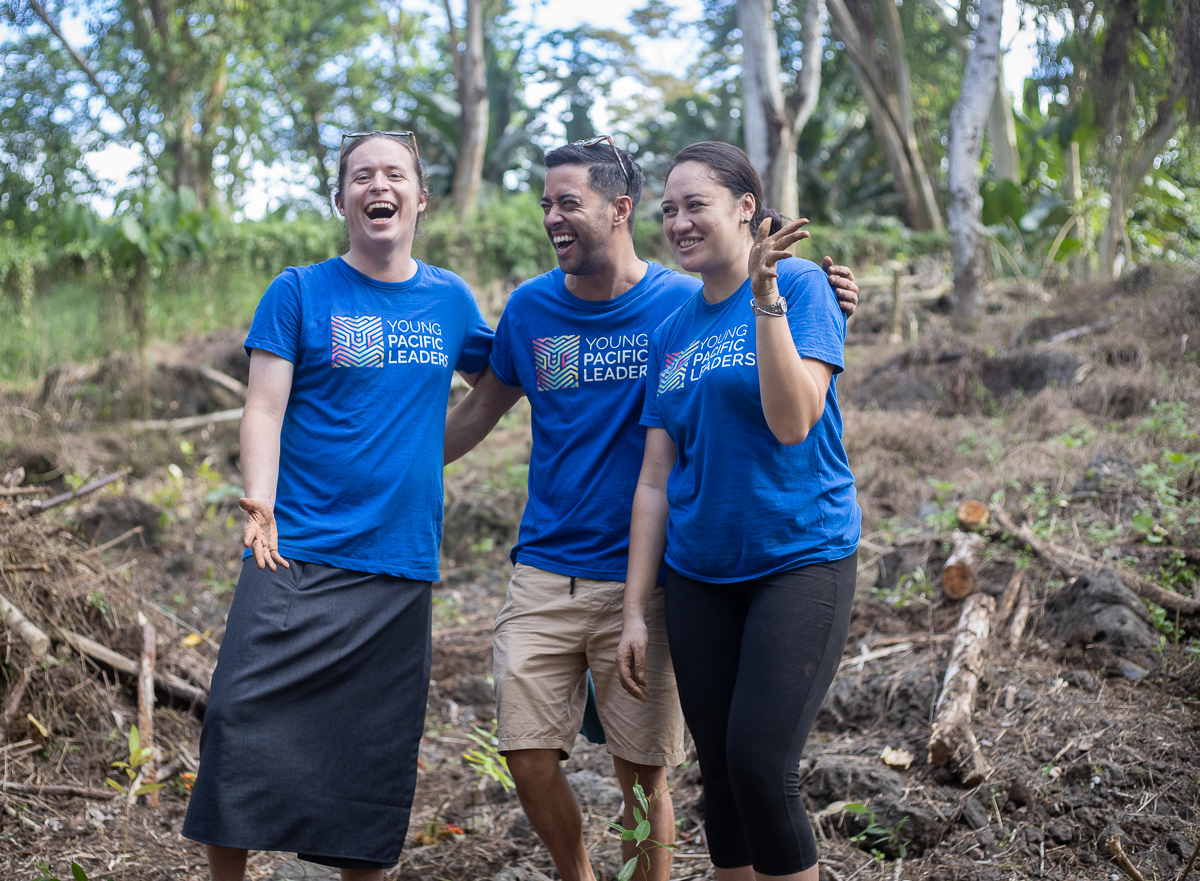 “With so many of us travelling to Suva and the impact that has, why not start off with something small, show that the three of us are taking responsibility and create a platform for everyone else to get engaged as well and make a small difference, to hopefully influence others to do the same,” said Mr Chong-Nee.

Flying, like any fuel-burning activity, sends hundreds of thousands of kilograms of carbon into the atmosphere. But trees and mangroves absorb carbon, making them the perfect solution to an ever-growing problem.

“There is opportunity there to offset their carbon emissions locally, there are also travellers who come to Samoa from overseas who can hopefully become interested in the idea of offsetting their emissions through schemes such this.”

Among the crowd of tree planters is an enthusiastic, chatty class of year eight students from Peace Chapel. On the walk from the National Reserve information centre to the planting site, it doesn’t take long before they burst into song.

The rest of their school wrapped up early ahead of Mother’s Day weekend. But this class wanted to stay behind, get on a bus at two o’clock and plant some trees. And Samoa Conservation Society’s James Atherton was on hand to give a lesson on how their trees planted today will grow two metres a year, and how the impact of the day will last for years to come.

“These kids were so excited. They were pumped, they were ready, so prepared to learn something new and they have,” said their teacher, Cassandra Hart. She added that she did not brief them on carbon emissions, or tree planting before they arrived.

“They knew about climate change, but they didn’t know about their travel, how much that affects the planet,” she said.

“It’s cool for them to learn about what their future travel does.” 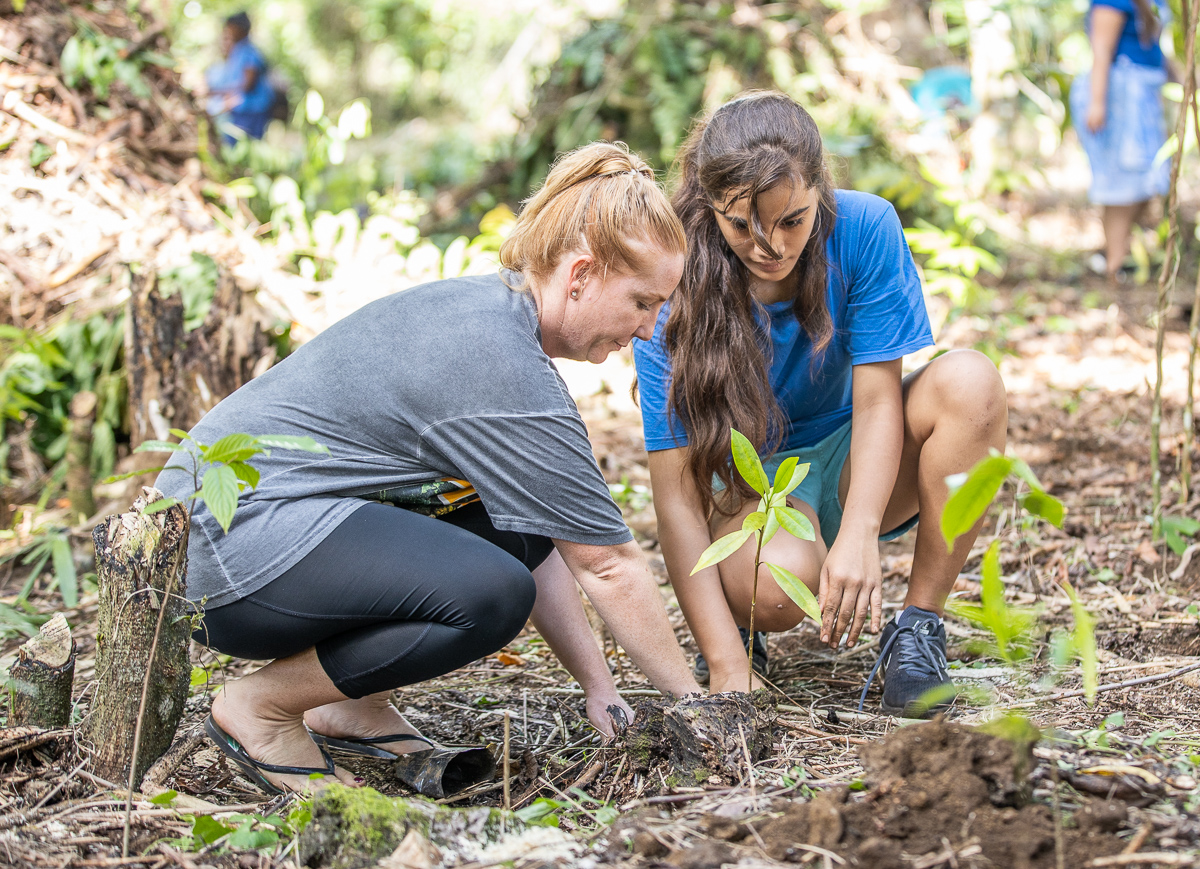 One of those students is Yennor Faau Wong See. She said she had no idea about the impacts of travel on the planet.

“I am really impressed by this logical way of planting trees to get rid of all your carbon,” she said.

Miss Faau Wong See wants to travel one day and is especially interested in visiting Japan. After this activity, she believes she should be planting trees for each trip she takes.

“I am really into Japan and I have heard they don’t have too much trees so I will take pleasure in planting trees there to get rid of my carbon,” she said.

“I know I am one person, but I am pretty sure other people will do it too.”

Other people doing it to is exactly what Christine Tuioti wants. She works for the Samoa Conservation Society, who are leading the carbon offsetting project, making it easy for travellers to calculate their emissions against trees, and either taking their money to plant on their behalf or facilitating their planting.

Ms Tuioti said for her, educating the younger generation is important.

SCS works alongside the Ministry of Natural Environment and Resources Two Million Trees Project. They prepare the planting site, by laying out young trees where they ought to be planted and digging small holes for them. For ecological restoration, this ensures the job is done correctly.

Watching the group of children quickly, but kindly work their way around the site, the question of fairness comes up. Should young people, some of whom have never been on a plane, be the ones to toil and sweat to offset kilograms of carbon in their atmosphere?

“Ten years back we could probably have afforded to have that attitude,” Ms Tuioti said.

“It’s such a critical time that we really should not be looking at who or what, just do what you can.” 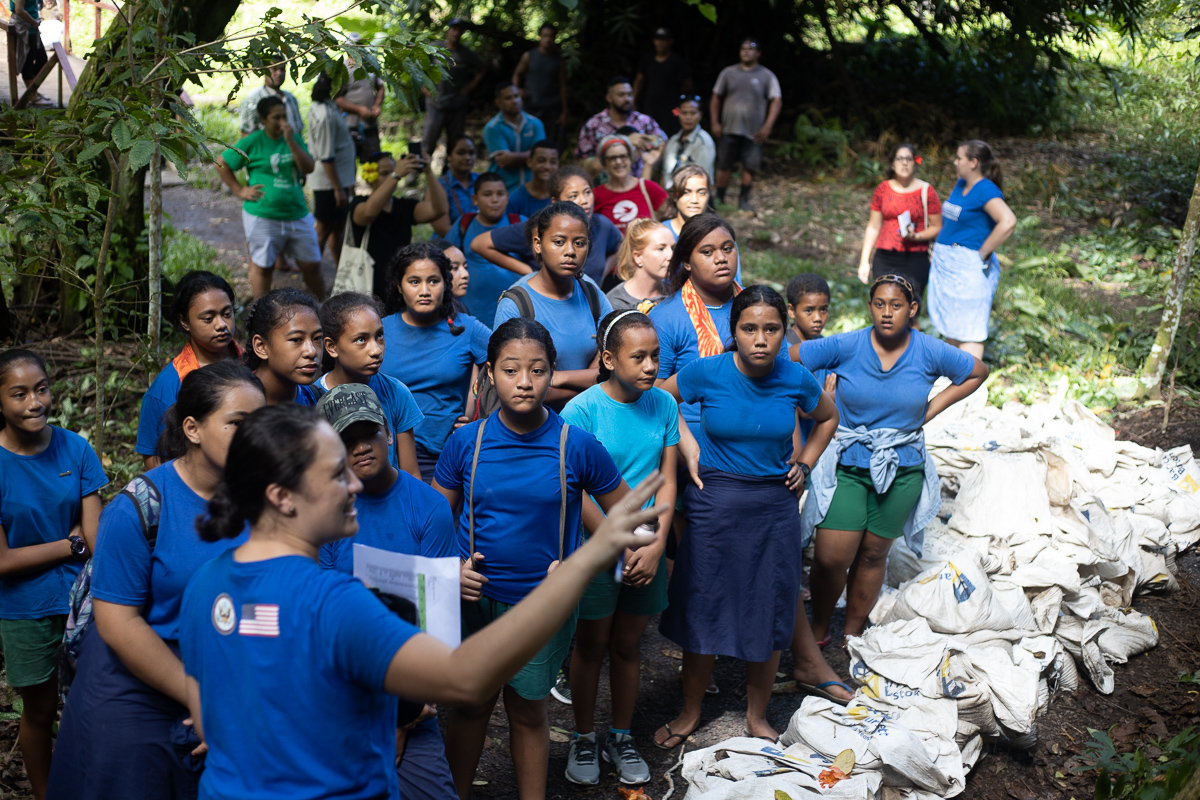 “It might seem a bit frustrating that generations before us created this issue and it is upon them to solve it, but you listen to them singing – it sounds like they’re having fun,” he said.

“The benefits of being out here doing this will be much more beneficial than sitting in a classroom and writing an essay, or listening to the news about climate change, or whatever other horrible thing is going on.”

If tree planting is not your thing, there are other positive ways to make a difference, Mr Dyer said.

“It doesn’t frustrate me that it’s up to me or up to us, I think that is actually quite inspiring to know that you have the potential to create a positive change,” he said.

“We might not see that as individuals but a small seed you’re planting now, whether that is an idea or an actual tree, has the ability to create huge amounts of positive change.”

For Mr Chong-Nee, seeing how quickly this initiative came together is proof of that.

“We organised this in only a few days and we’ve been really fortunate to have 40 plus people here from school children to adults and everything in between,” he said.

“If we can do it in a few days there is much more that can be done by others in Samoa.

“If they have an idea for a small project that could make a positive impact then I encourage them to do it.”