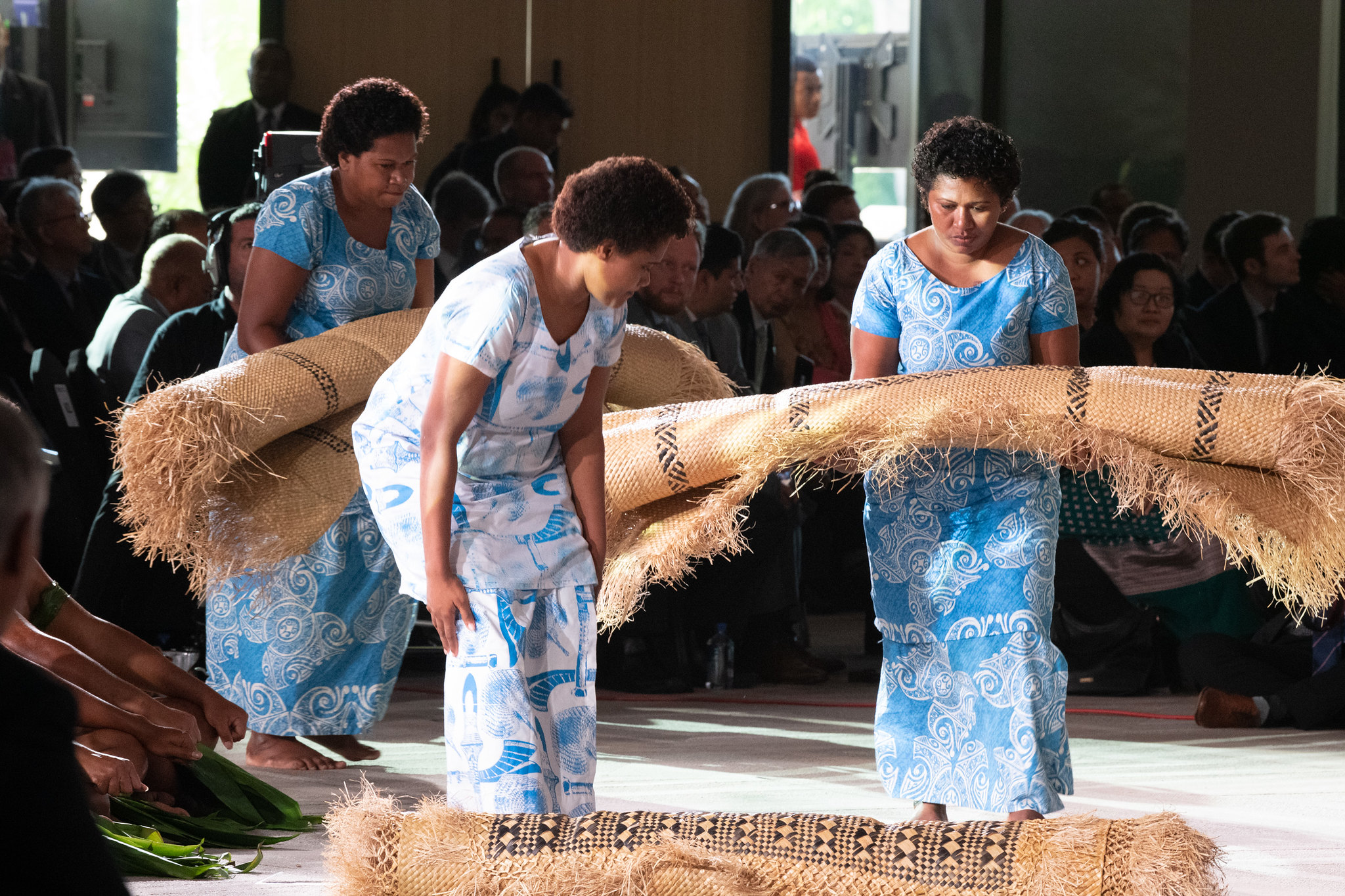 In honour of the 52nd Asian Development Bank Annual Meeting of the Board of Governors, Fiji conducted an official opening the nation can be proud of.

For the first time, the nearly 3,000 strong meeting has been hosted by a Pacific Island nation, which has not only offered a massive boost to Fiji’s tourism but alerted member states to the immediate threats of climate change in the region.

On Friday morning, Denarau Island’s Sheraton Ballroom was packed with delegates, guests, observers and media to witness the Fijian traditional welcoming ceremony marking the official opening of the board of Governors meeting, which continues until Sunday.

Silence filled the ballroom as A.D.D. President Takehiko Nakao, and Fiji’s Prime Minister Josaia Voreqe Bainimarama took their seats on the stage that took up nearly the whole width of the room, sitting before a screen emblazoned with Fijian masi (siapo) design. 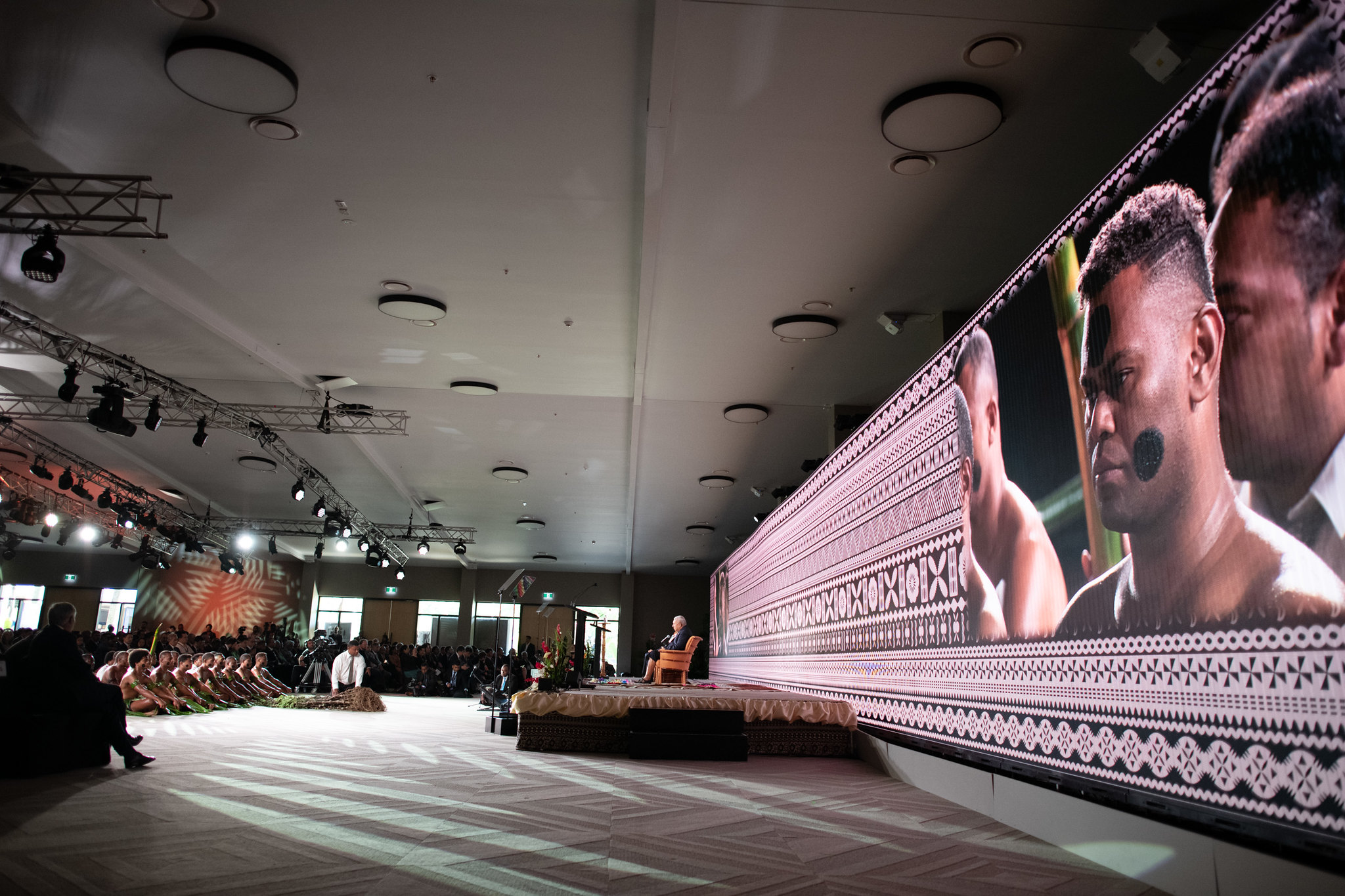 A group of performers, dressed in traditional garb and adorned with black paint on their faces carried out the many components on the age-old ritual: from the speeches given by the matanivanua (traditional spokesperson), to the gifting of a whale tooth (tabua), food and several fine mats to President Nakao.

The President performed his part well, sitting solemnly on stage next to Prime Minister Bainimarama, and accepted kava with an enthusiastic “bula”, which was met with light applause and laughter from the audience.

In his ceremonial address, President Nakao said thanks to the intricate ceremony, he felt he had been made a Fijian chief. 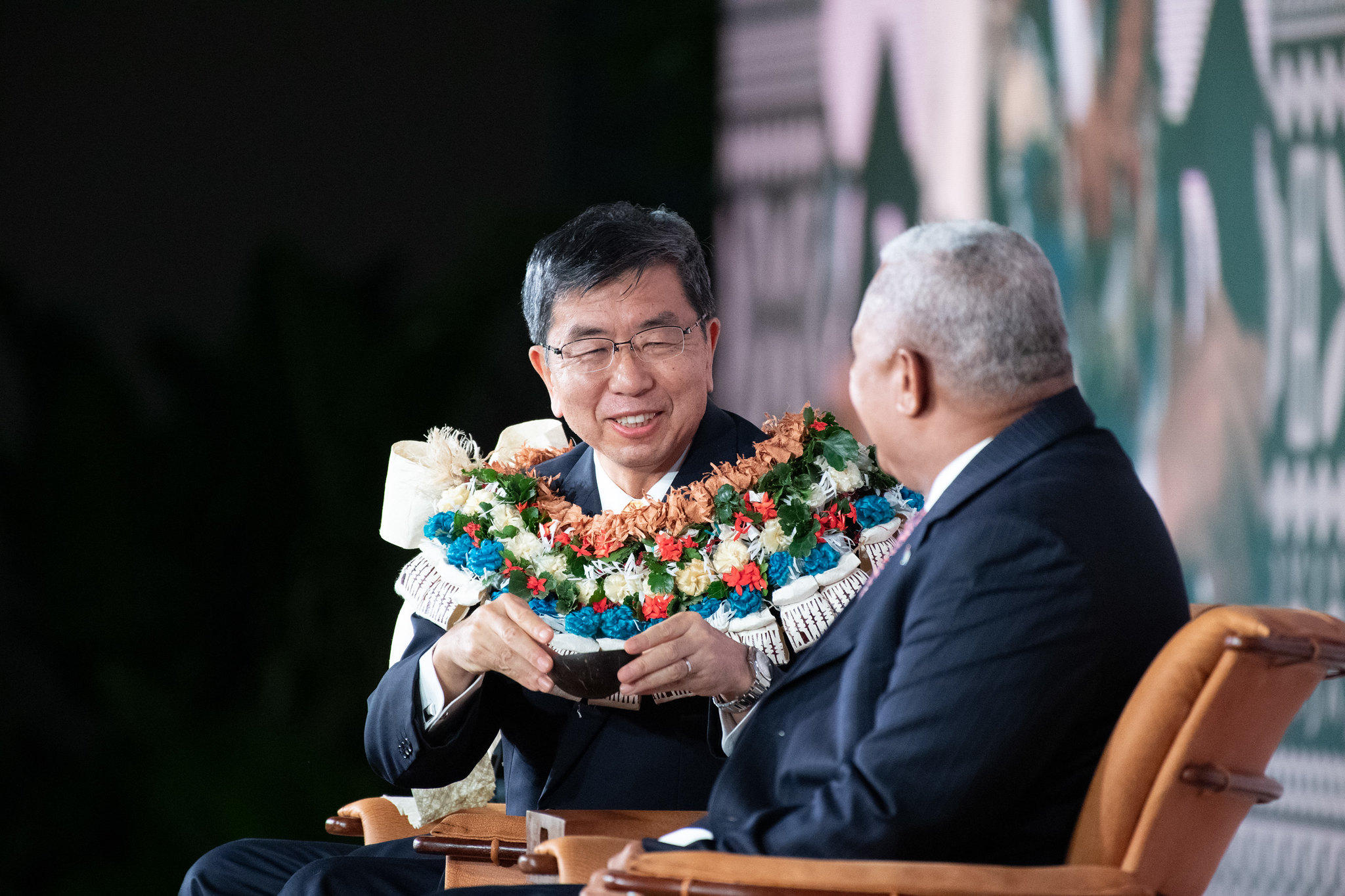 “I really appreciate the Prime Minister and Government of Fiji, and people of Fiji for hosting the annual meeting this year.

“I hope you will continue to support A.D.B., and I look forward to a successful meeting,” he said.

Though the harsh theatrical lighting and the conference room setting clashed with the traditions of the host country, the President appeared impressed and honoured with the performance.

The troupe sat straight backed, and sang beautifully during the making of the yaqona, and glided across the carpet to whisk the gifts of food and mats away when the ceremony was complete, and the audience finally gave in to the temptation of applause – though they had been instructed by the master of ceremonies not to. 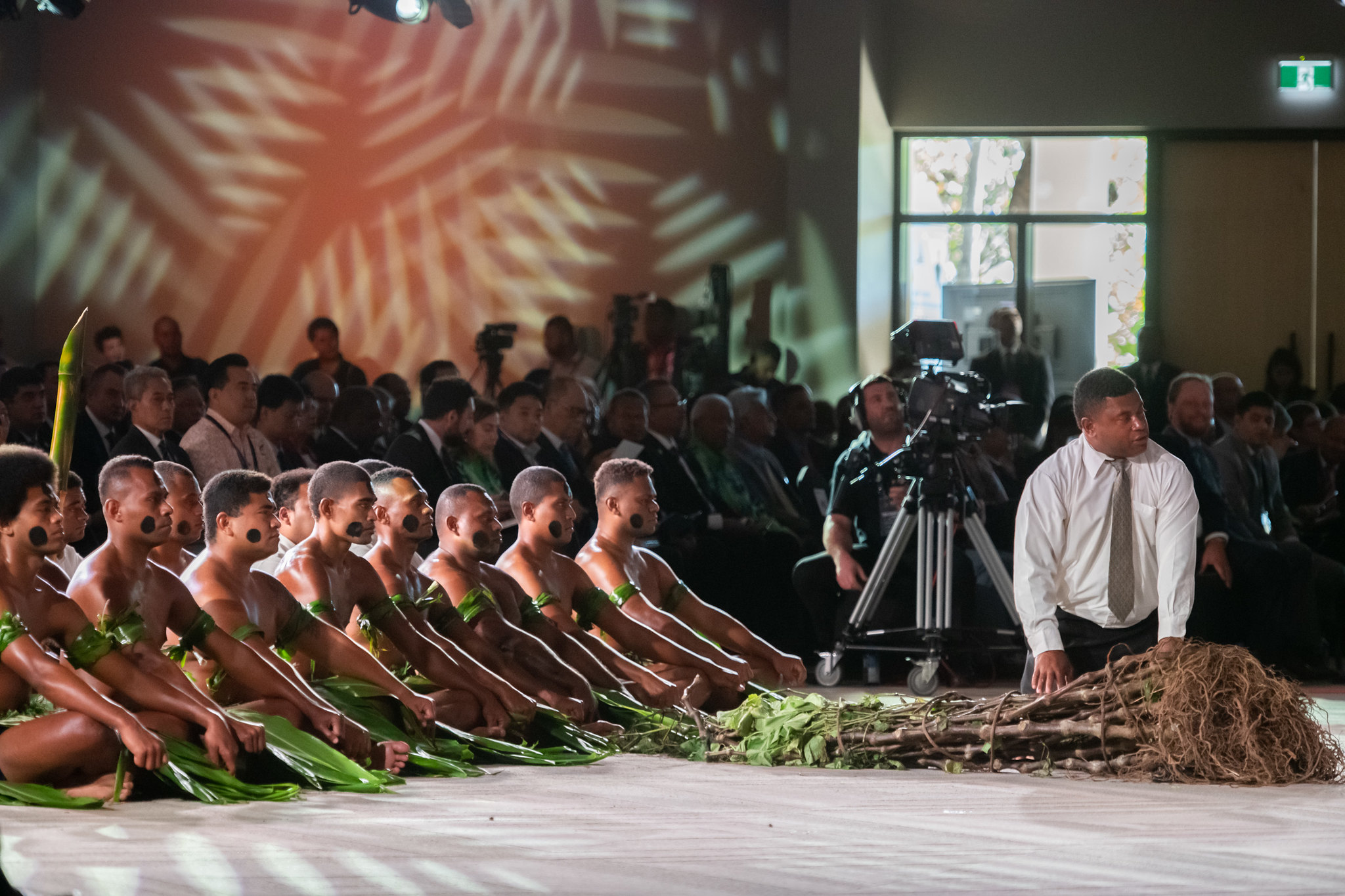 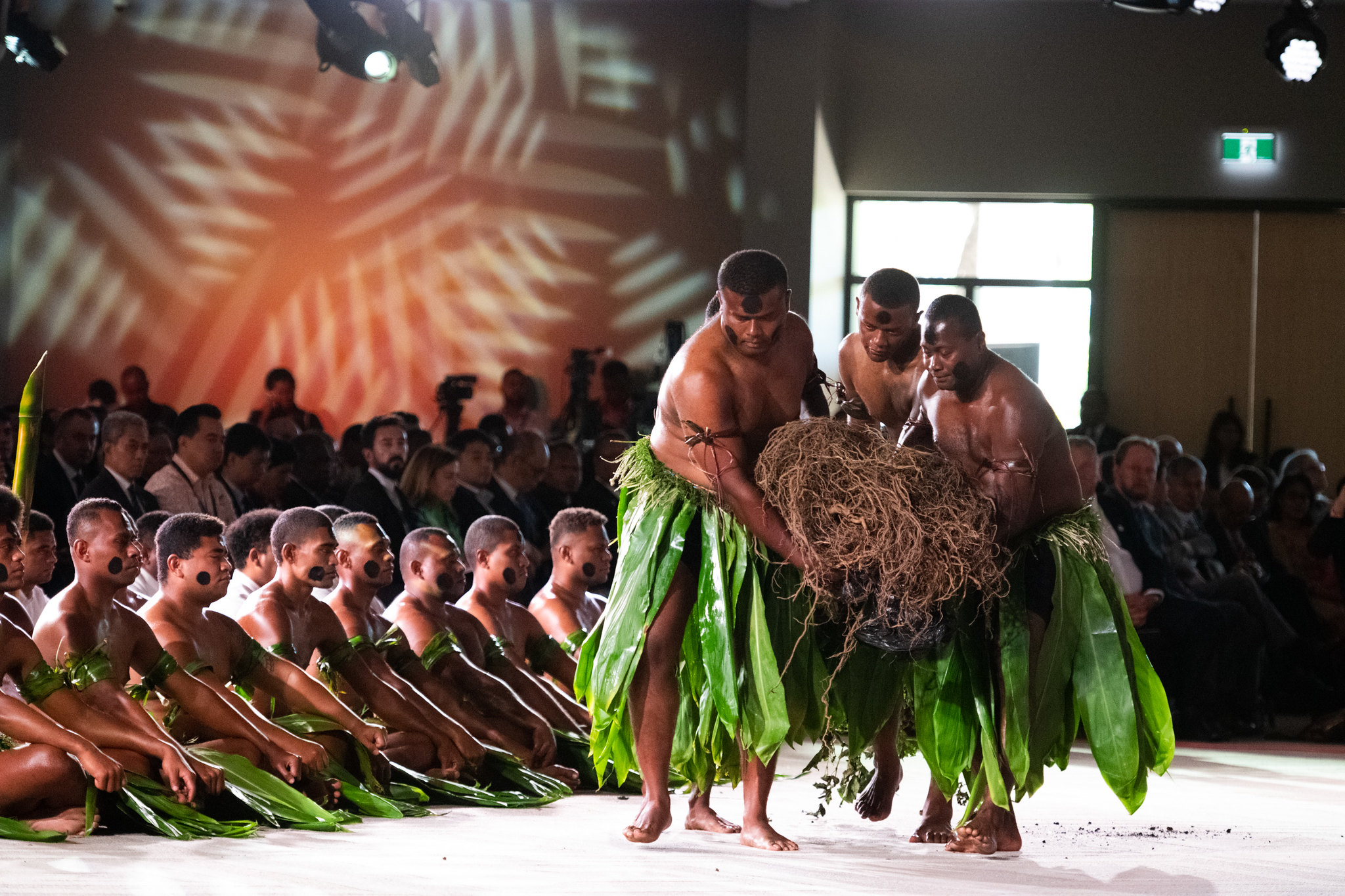 The A.D.B. meeting official openings have a reputation for being impressive cultural shows, and Fiji’s efforts did not disappoint.