Moore-Aiono and his London Irish teammate Ben Atkins, who both came off the bench for England Under 20s during their 35-8 win over South Africa. (Photo: Supplied)
Rugby union
Samoans abroad

Izaiha Moore-Aiono looks set for a bright future in top-level rugby after the 19-year-old made his debut for the England Under-20s on the weekend.

The loose forward came off the bench and scored a try within the final play of England’s 35-8 win over South Africa.

He said playing at that level was quite different to anything he has experienced previously.

“Being in a different environment, just getting that exposure is really good.”

The fixture against the Junior Springboks was the final opportunity for players to put their hand up for selection ahead of the World Rugby U20 Championships next month in Argentina.

Moore-Aiono said he’d love to be involved in the tournament, which has launched the careers of so many of today’s rugby stars.

“Playing guys from different countries, you kind of get exposed to how they play and then add that stuff to your game as well, it makes you grow as a player.”

Having only turned 19 in March, Moore-Aiono will be eligible for next year’s tournament as well, where he wants to claim a starting berth.

He has just wrapped up his first season playing professionally for the club London Irish, in his first year out of English schools rugby powerhouse Wellington College. 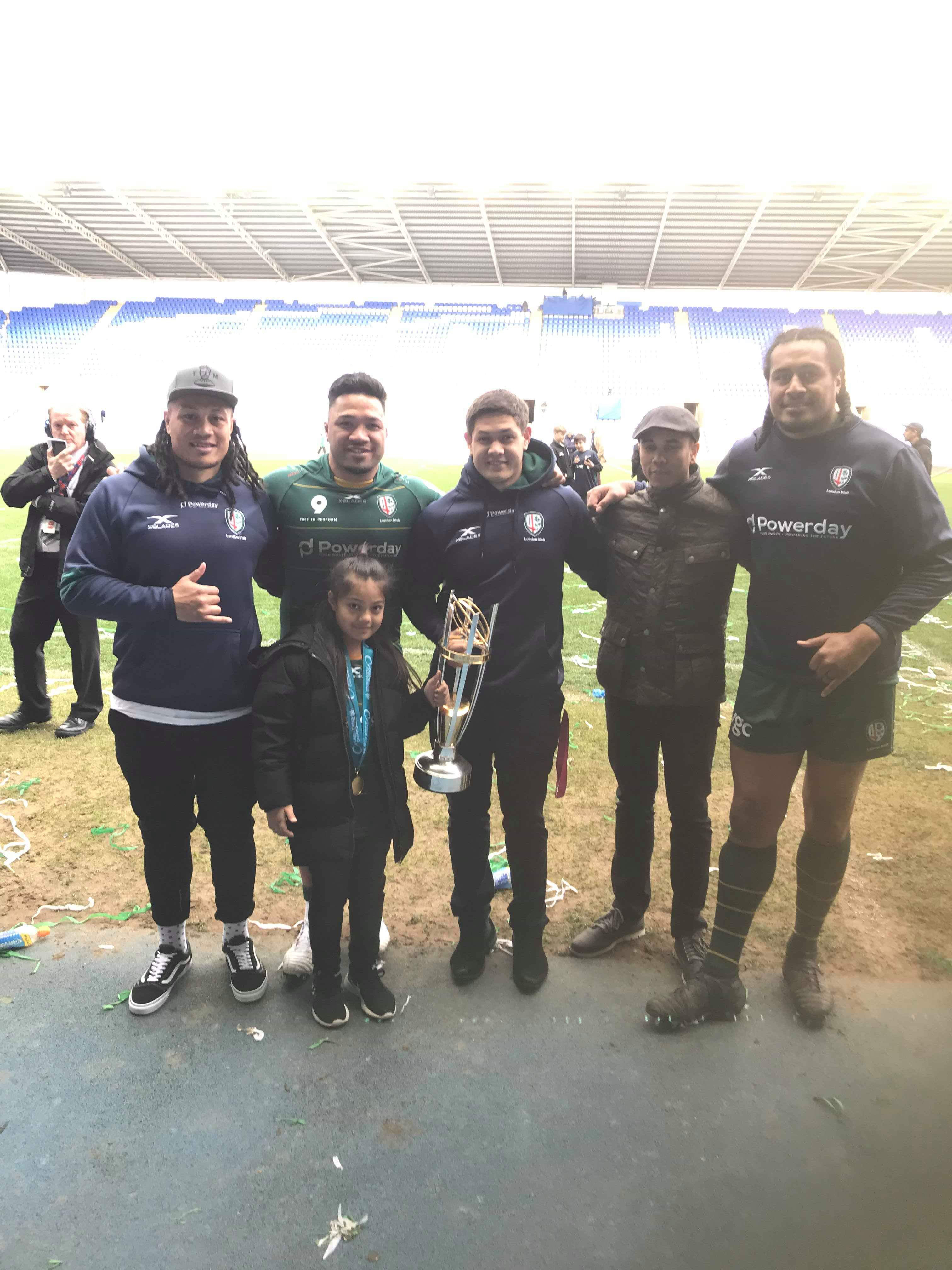 That involved living away from home in Berkshire, and moving into a house provided by the club in Sunbury, where Irish train.

“I quite enjoy it, it’s different,” Moore-Aiono said.

“When you’re living with a bunch of lads in a rugby house you get that special bond that you don’t really have in any other workplace.

“It’s definitely a good thing to have coming straight out of college, knowing that you’re not the only one struggling, you find a way around it.”

He said he is living his dream; playing professional rugby.

“My mum [Aroha Lam, neé Moore] played for New Zealand, my dad [Rudal Aiono] played for Samoa, so it’s definitely been a dream of mine to play professionally.

“Being able to do that every day is a blessing really.”

Moore-Aiono grew up in New Zealand, then moved to Australia at the age of five and has lived with his father in England for about five years. 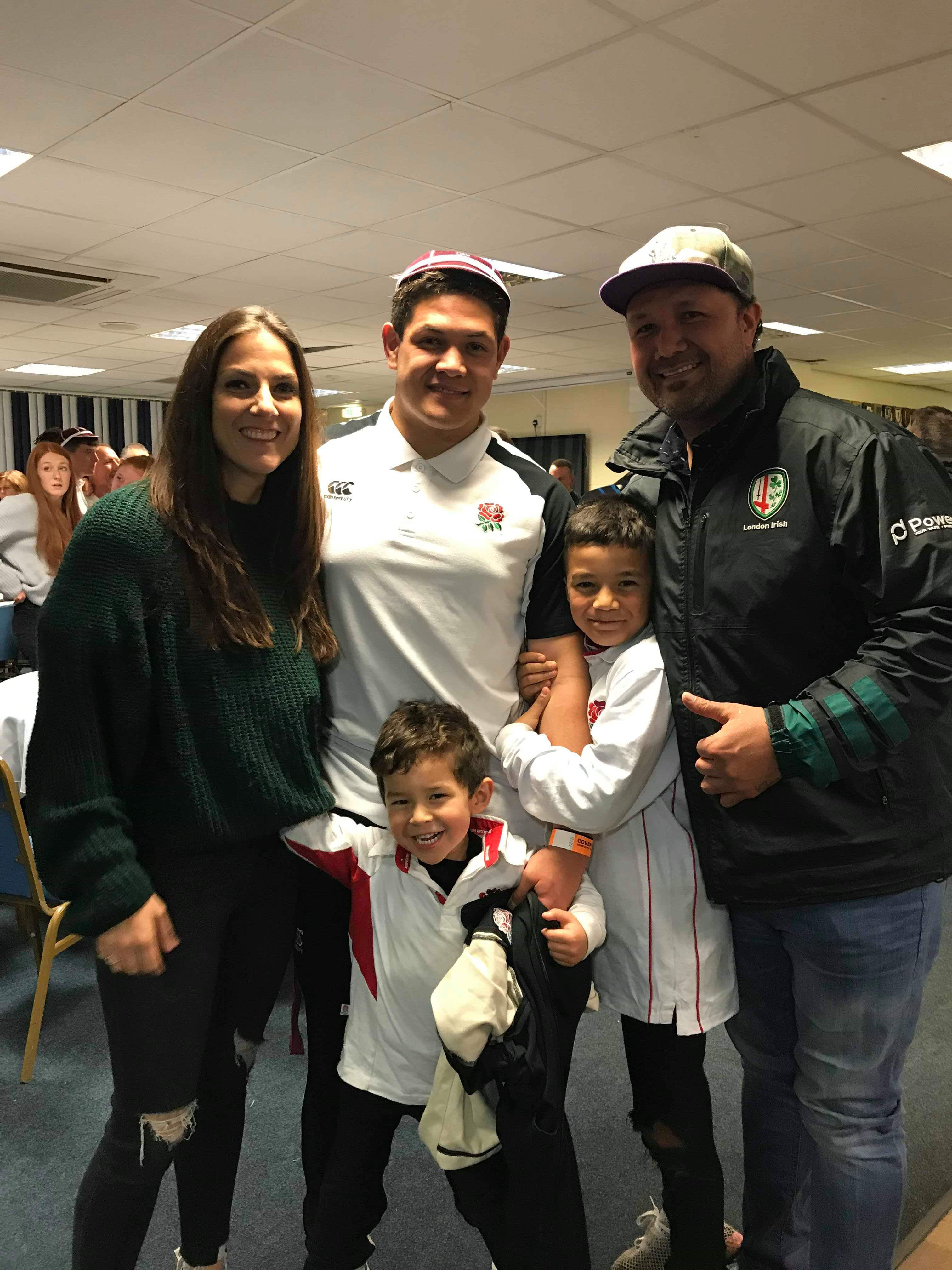 Aiono said he is stoked for his son, who is finally getting a bit of good luck.

“He’s had a couple of serious injuries, major reconstructions on both shoulders.

“He’s very focused and determined in that respect.”

Moore-Aiono said hard work will be the key to cracking senior rugby for club and country.

“I think it’s just being persistent on my game, getting dedicated to bettering myself every week.

“Then just getting feedback from coaches, they’ve got a great set-up at Irish, a lot of good coaches there, then ever better coaching at England level.

“I guess just taking it all on board, and growing as a player really.”

Having played a lot of centre in the past, Moore-Aiono is now seen as a back-rower.

“My game is pretty much based around Ardie Savea’s, I really admire how he plays.

“How he gets around the park and dominates as a light player for his position.

“I was a league player growing up, so Sonny Bill Williams was a big influence as well.”

Like his All Black idols Savea and Williams, Moore-Aiono feels a strong connection to his Samoan background and heritage.

“I’m very proud of where I come from, whenever I play I do it for my family and friends,” he said.

“You want to make everyone proud around you.”

“The boys always say their grace in Samoan before they eat.

“I just have that conversation with [my kids] to know their roots, and what’s right and what’s wrong, respect your elders and do as you’re told.”

Moore-Aiono said his family didn’t have much growing up, so he has learned to be grateful for all the opportunities he gets.

“Taking it with both hands, and just going 100 percent all the time, not looking back, always going forward.

“Looking after those that have given up a lot of time for you, making sure you make that time for those people.”

While he is eligible to play for a few different countries, Moore-Aiono said he is interested in playing for Samoa down the track.

“I want to be able to represent where I come from, and show that any kid from any background can make it at the highest level.”

He said it’s his call to make, and he’ll decide based on whatever is in the best interests of his rugby pathway and what he wants to do.