Vaimea Primary Year one students working on their tracing and techniques to hold the pencil with the help of Applied Scholastic provided resources (Photo: Misiona Simo)
Education

Teaching material based on the work of Church of Scientology founder L. Ron Hubbard is being trialed in six Samoan primary schools.

Following a month-long investigation by the Samoa Observer – which included interviews with the Ministry of Education Sports and Culture (M.E.S.C.) officials, teachers and education experts as well as the collection of teaching material – it has been confirmed material produced by Applied Scholastics International (A.S.I.) are being used in the Faleula, Vaimea, Aele, Vaitele, Safotulafai and Faga primary schools on the islands of Upolu and Savai’i.

A.S.I. is an American not-for-profit educational organisation which was founded in 1972 and uses the work of L. Ron Hubbard, an American who founded the Church of Scientology in the 1950s. The American church has over the years attracted scrutiny and criticism over its religious beliefs and practices.

The A.S.I. made headlines in Samoa in February last year, when it donated 10,000 books titled “Learning How To Learn” to the M.E.S.C. The presentation was done by its representative Warren Meyer, and was witnessed by Prime Minister Tuilaepa Dr. Sa'ilele Malielegaoi and the Minister of Education Sports and Culture, Loau Keneti Sio. 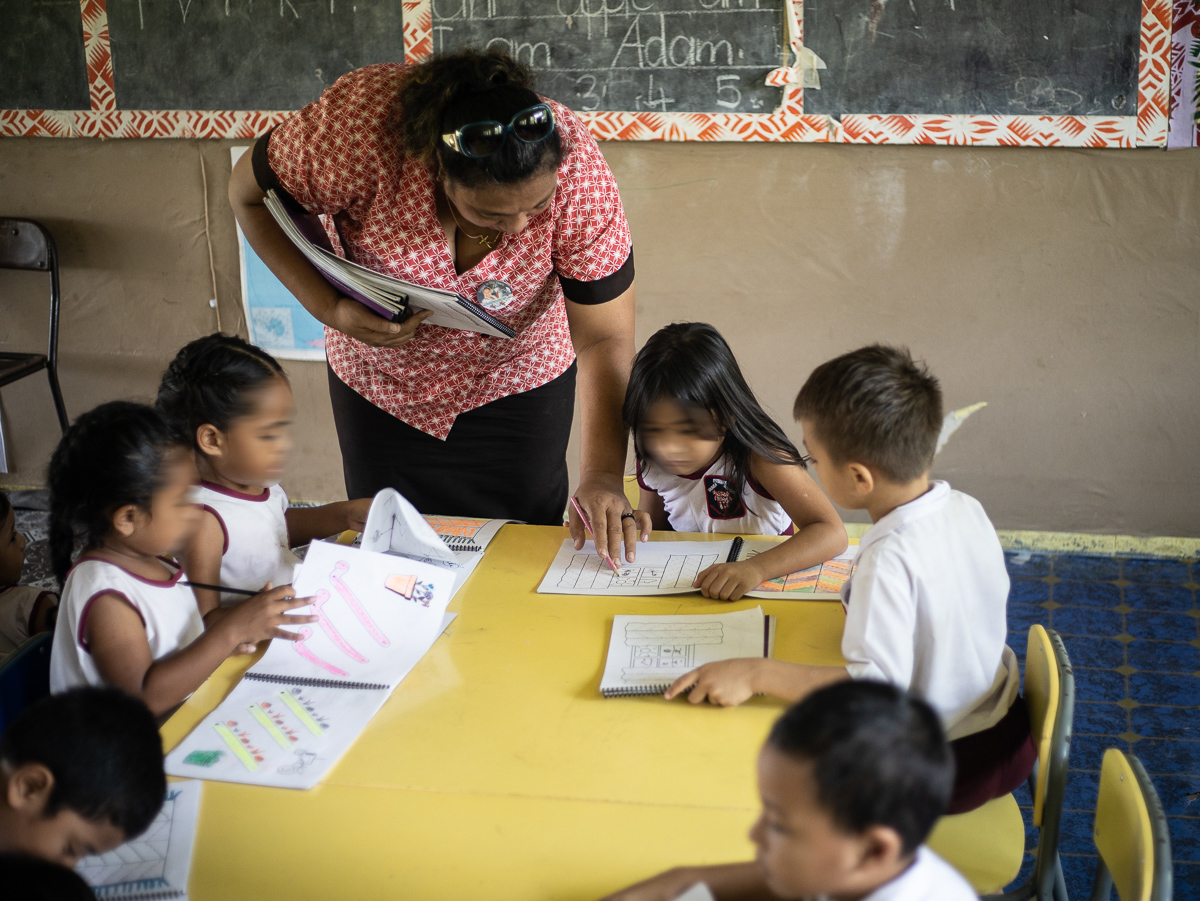 But that is not the first time the A.S.I. has come to Samoa. In October 2007 there was a march in Apia by hundreds of Christians to protest the Government’s support for the Church of Scientology. The church had reportedly set up tents outside the Government Building in Apia to run a two-week disaster training workshop and left after the protest.

Eleven years later an American organisation – which uses the work of the founder of the Church of Scientology – is back again, and in partnership with the M.E.S.C. They have distributed teaching tools “based on the work of L. Ron Hubbard” to the six primary schools, particularly for local teachers to trial in Year 1-4 classes. And based on an evaluation of the students’ academic performances, the M.E.S.C. will begin a nationwide roll out of the teaching material, but only if the trials in the six schools are successful.

However, lecturer at the National University of Samoa (N.U.S.) Faculty of Education, Vui Fa’apopo Tauaanae, told this newspaper that her personal opinion is that the engagement of A.S.I. is "not best practice" and should be a concern for the Ministry as teachers should be doing their own lesson plans.

“Because they are trained here to design a full lesson and then they teach and then follow that plan; which makes the teaching more effective and more efficient,” she added.

Minister Loau confirmed the use of the teaching material in the six schools, when contacted by this newspaper, and despite the concerns expressed by the N.U.S. lecturer, said he is grateful for the assistance provided by the A.S.I. to  educate and up-skill Samoan teachers.

“I’m telling you, it’s a huge and great help to our teachers, you know. The up-skilling of our teachers with the methodology that they’re using, you know very simple methods.

“Not only are the teachers getting up-skilled. But the teachers have also seen how fast the children are absorbing and starting to understand better, as usual, while the teacher is teaching the students are playing in the corner – there is a reason why they’re like that,” he said.

The A.S.I. teaching material will enable the teachers to learn new methods, he added, on how to handle vulnerable children.

Local teachers including school principals are also offered training at the A.S.I. Headquarters in St. Louis Missouri, America as part of the partnership with M.E.S.C.

Fotu Alise Lefale, who teaches at one of the trial schools Faleula, has completed her training in Missouri on “study technology” and claims there has been improvements in her students’ learning since she began using the A.S.I. teaching material.

“We were taught about the way we communicate to the students so they can learn something from the learning process. I can see that when I started with them and there have been changes because they do it step by step. We teach with the mindset that they know already, but they don’t,” she said.

Faleula Primary School principal, Selau Maulolo Futi also said one of the advantages of the the A.S.I. teaching material is that they do not have to do any more lesson plans.

“Teachers’ manuals have lesson plans, unlike those days we had to make our own plans,” said Ms. Lefale.

“They provide the lesson plans for all the things we need to teach the children, us teachers we don’t need to write our lesson plans, its already there. And they provide this with learning step by step so the students don’t have any barriers, while they’re learning in class and this is great."

And according to A.S.I. President, Christine Gerson, Samoa is the first Pacific Island nation where their material "has worked" and the feedback has been “positive.”

Samoan educationist and a former director of education of the Catholic archdiocese of Samoa-Apia and pro chancellor of N.U.S., Aeau Chris Hazelman, told this newspaper that he supports any program that will help schools and teachers to improve the overall learning experience of students.

“As a teacher, one of the things that you’re always looking at is what are other forms of ideas or methodologies that can be used for the benefit of our children. So if that is what they are trying to bring through into their system, and the Ministry has endorsed it then why not, in my mind."

He said the education sector in Samoa continues to be affected by teacher shortages and more pathways should be identified to improve knowledge in literacy, numeracy and science.

“Again, if this is a pathway that can help our schools, then why not. Be open minded about it, at the end of the day these are Samoa’s children. This is what we’re trying to do and I think that’s why Ministry has been able to do their task and to give the okay,” he told this newspaper in an interview.

The link between A.S.I. and Church of Scientology

But the absence of a link between the A.S.I. teaching material – bearing the name L. Ron Hubbard on the books' covers – and his Church of Scientology has not gone unnoticed.

A number of M.E.S.C. staff members, who did not want to be identified, questioned the transparency of the American educational organization.

“So here is the issue with us, with this 'Based on the works of Ron L Hubbard'. And if you’ve noticed, nowhere does it spell Scientology anywhere, there’s a whole biography section on him and it doesn’t mention that he founded Scientology.

“And the big argument is that the education program has nothing to do with the beliefs of Scientology. But if this book said that it was based on the works of Jesus Christ, and I try to convince you that it had nothing to do with Christianity, you’d laugh at my face. And that’s sort of how it is here,” the staff members said.

And the first teacher who attended the training in Missouri, when asked if she heard of the Church of Scientology during her training in America, said "I have no idea about scientology". 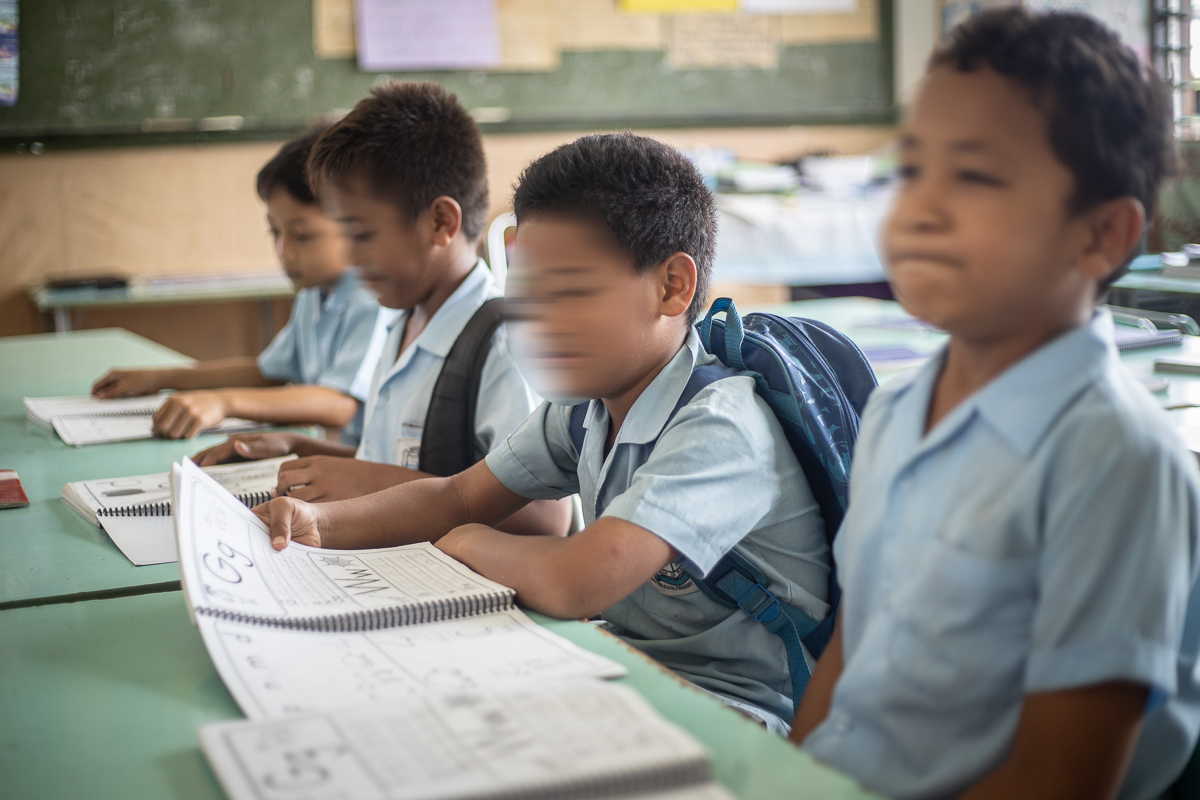 “They are not a church; they are an organization for education, not the church,” he told this newspaper.

But despite the Minister's attempts to downplay the links, Ms. Gerson admitted that the A.S.I. uses material that is based on the work of the Church of Scientology founder, and they are thankful for the support they get from scientologists.

“We are very proud of our connection with L. Ron Hubbard and are grateful for the support we have received from the Church of Scientology and its members. We make this very clear.

The secrecy behind the links between A.S.I. and the Church of Scientology has not gone down well with the Fa’atuatua Christian College principal, Selepa Tipama’a.

She said as a Christian educator, she is against anything secular that shifts man’s focus away from Samoa's Christian values and beliefs and promotes the thought or idea that 'man can do life without God'.

“Christian educators need to check that what they use is in line with their values and beliefs, yet at the same time cater for the educational needs of the students.

“Education is at its best when the institution serve with hearts, and honoring God in the process,” she added.

According to the Encyclopedia Britannica, L. Ron Hubbard was born March 13, 1911, Tilden, Nebraska, U.S.— and died January 24, 1986. He was an American novelist and founder of the Church of Scientology and studied at the George Washington University in Washington, D.C. After serving in the navy in World War II, he published Dianetics (1950), which contained his theories of the human mind. Gradually, he moved away from Dianetics’ focus on the mind to a more religious approach to the human condition, which he called Scientology. After founding the Church of Scientology in 1954, Hubbard struggled to gain recognition of it as a legit religion and was often at odds with tax authorities and former members who accused the church of fraud and harassment.