Dozens of volunteers from agencies working all across Samoa gathered in Faleata yesterday to celebrate International Volunteers Day, and to launch a report on volunteerism.

Volunteers from nearly 10 agencies gathered to meet and hear from the executive director of the United Nations Volunteering program Olivier Adam, and the Asia Pacific coordinator Shalina Miah.

In his address, Mr. Adam said he was honoured to visit Samoa to celebrate Volunteers Day, and being so close to the dateline, he was also excited to be the first in the world to celebrate.

Samoa is a country which embodies the spirit of volunteerism, he said.

“This makes communities more resilient to shocks and stresses.”

Climate change, food security and natural disasters are causes of great adversity, which could not be tackled without volunteers, Mr Adam continued.

“Volunteers like you support our people-driven, transformative agenda for change,” he said.

“Those people to people contacts are the pathways for peace, when people work together for a common purpose.”

Fiame noted that unfortunately, there is not yet a strong representation of Pacific Islanders in the United Nations system. While there may be reasons for that, she said she hoped Samoan’s would take up the volunteer roles as points of entry into the U.N.

Backing up her claim, U.N.D.P’s Charles Chauvel said if he remains in his role, he is committed to getting more Samoan’s and other Pacific Islanders into the U.N system.

“You are our extension into the field, and we value what we achieve together,” she said.

The formalities were followed by presentations from volunteers on the projects they work on, such as Cris Fierro, Australian Volunteers International (A.V.I), who supports digital capacity building at the Ministry of Natural Resources and Environment, and Yuka Keino who supports the small team at the Museum of Samoa and the Ministry of Education Sports and Culture through the Japan International Cooperation Agency (JICA) volunteer program.

Other organisations represented were Australian Aid, Volunteer Services Abroad, and the Peace Corps. 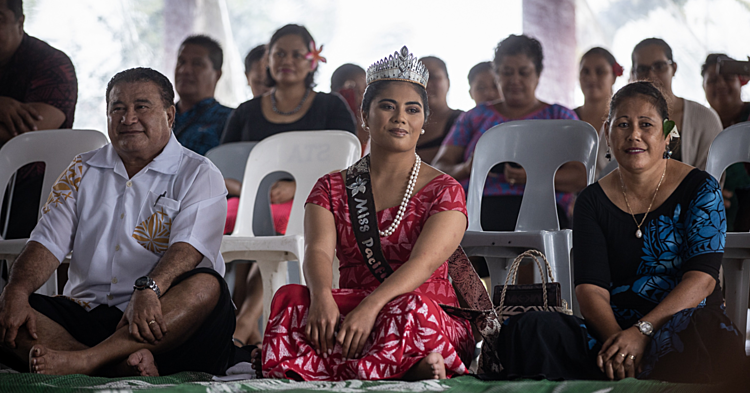 The father of reigning Miss Samoa and Pacific Islands has thrown his support behind his daughter as she begins work as part of the pageant.

Olo, P.M. clash over measles' cause

Olo accused the Government of being negligent, claiming they ignored the alarm bells about the measles epidemic, which had been ringing for at least seven months before the epidemic was declared. He also revealed that the Ministry of Health did not have a “Pandemic Emergency Response Plan” and that they only managed to scrape one together in November last year, well after the measles crisis had claimed innocent lives.