Hearing of Court Registrar accused over a missing gun begins

The hearing of charges against a suspended Deputy Registrar of the Court, Victory Lesa, started on Thursday.

Lesa faces three charges, namely possession of a firearm without a valid certificate, possession of unlawful weapon and theft as a servant.

He pleaded not guilty to the charges. The defendant is accused of allegedly removing a firearm from the Ministry of Justice and Courts Administration. The firearm in question, a semi-automatic rifle Springfield SAR 8 model, was ceased by Police from Satapuala during a road block at the village in 2012.

The information of the gun was recorded and placed in the Police armoury at the time, and was later handed to the Ministry of Justice in 2013 to exhibit as evidence in Court for the Satapuala case.

However, the gun went missing. It was re-discovered by the Police in 2018 during an operation at Faleula.

Lesa is represented by lawyer, Aumua Ming Leung Wai while Lucy Sio Ofoia, of the Attorney General's Office, is the prosecutor.

The first witness was Senior Sergeant Tagaloasa Toddy Iosefa who said he was aware of the gun in question. He said it was ceased from Satapuala in 2012 during an incident there.

He told the Court the gun together with other accessories were recorded in a book and was placed in the Police armoury.

“The firearm is unlawful if it's in the possession of anyone,” said Tagaloasa. “It was ceased from Satapuala case and I recorded the details of the firearm before it was locked in the armoury. It wasn’t until in 2014 when a Deputy Registrar named Lemi Feutagai said that they did not have the firearm in the exhibit (room).”

According to Tagaloasa, it was then that he investigated what had happened to the gun.

He said he found that the information in the records show it was handed over in 2013. 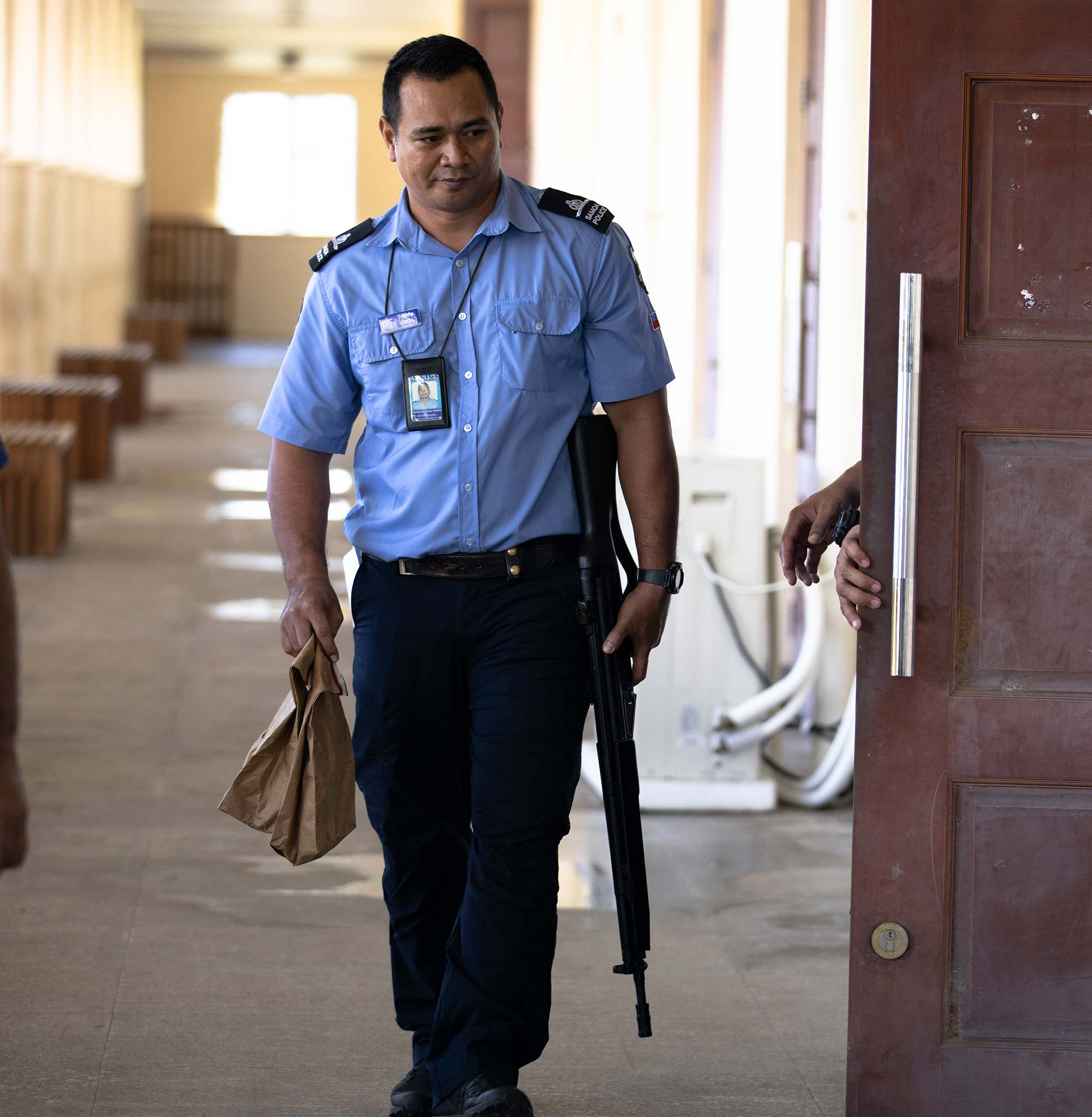 He said the Police Commissioner at the time was informed and he asked for a report. An investigation by the Police Professional Standards Unit and the Criminal Investigation Division (C.I.D.) ensued.

The Senior Sergeant  told the Court it wasn’t until 22 June 2018, during a Police operation at Faleula, that he saw the gun in question again. The operation was done at Uli Fata’s home, where the Police searched for things prisoner Pati Chong Nee stole.

Tagaloasa recalled that when the operation took place in Faleula, a car drove up to the house of the man they were searching.

“I approached the car, which was reversing and tried to leave,” he said. “The driver was in a rush to leave and I opened the car door and saw Lonino Aumua with his wife and children in the car. I know Lonino from other cases that I gave evidence in and it is mainly firearm-related cases.”

Tagaloasa said at this point, he saw that Lonino was panicking.

He said it was Constable Sivelio Lui who went to the back of the car and saw there was a firearm inside.

Tagaloasa said he had asked Lonino what was at the back of the car and he had replied it was nothing.

It was the second time he had asked that Lonino said it was a gun. The Senior Sergeant said the gun was loaded and he had to clear it for precautionary measures.

Following a Police search of Lonino’s car, they found ammunition underneath the passenger’s seat.

“When I held the gun, I looked at the serial number and I recognised it,” he told the Court. “This was the gun from the Satapuala case, a springfield semi-automatic weapon.”

In his evidence, Lonino said he remembered on 22 June, 2018, he went with his family to Faleula to collect a car part for his car from his friend Uli Fata. However, when they arrived, he saw a lot of Police at the house and decided to reverse, but was stopped by Tagaloasa.

He said his car was searched by Police and had discovered the gun in the car boot. Asked by Mrs. Ofoia who owns the gun, Lonino responded that it belongs to him because it was in his car.

Pressed to explain how the gun came into his possession, Lonino was reluctant to answer.

“It is very hard for me to answer that because of my close relation with Victory,” he said. “We are like family, he is like a brother to me, we went to school together and that is why it is hard for me to give my evidence.”

Mrs. Ofoia reminded Lonino he needs to make his evidence clear about where he got the gun from.

Lonino then told the Court he got the gun from the accused, Victory Lesa. He said he cannot recall when he got the gun but it is about four to five years ago.

“I picked it up from Victory at Vailima,” he said. “I spoke with Victory on the phone and he called me to come to Robert Louis to pick up the firearm.

“I went with my wife and son to pick up the gun. When we arrived, Victory was in his car and I went out to meet him. He had showed me the gun which was inside a black bag. So I took it and put in my car and we left.”

The Court heard that the defendant came in a white van during the alleged pickup of the gun. Asked why the gun was given to him, Lonino said the defendant wanted him to sell it to get some money. He said he did not give Lesa money on that day but it was about a week later that he called him and gave him $1,500.

During cross examination, lawyer Aumua told Lonino that the defendant had sold his van in 2011 and could not have met him at the time if it was five years ago because the car was already sold. The witness maintained the defendant came in the van.

Aumua also put it to Lonino that the defendant only knows him when they see each other out, but he is not a close friend.

But the witness said the defendant is a close friend of his and was also his best man in their wedding at the Court house.

He also told the Court that the defendant needed the money to take his girlfriend, who was pregnant at the time and needed to go overseas for a check-up.

Aumua disputed the evidence about Lesa’s girlfriend being pregnant at the time and she could not have been because it does not match the age of his son now.

But Lonino said this is what he was told by Lesa at the time.  During his evidence, Lesa denied the claims by Lonino. He said the mother of his son never went overseas when she was carrying or after birth. He said his son was born at the Moto’otua hospital.

Lesa also denied removing the gun. When it was put to him that he gave the gun to Lonino with intention to sell it, Lesa strongly denied this.

He said he owns a gun and it is registered. He said Lonino’s wife came to him for help to bail Lonino out and he was unhappy that they came to his wife’s family home.

He told the Court that he had told Lonino’s wife to go to a Registrar Faatasi because he deals with remands for Saturdays and Sundays.

During cross examination, Mrs. Ofoia put it to Lesa that because of his close friendship with Lonino, he had given him the gun to sell.

Again, Lesa strongly denied this saying he only knows of him when he sees him out but does not go to his house or consider him a close friend.

The matter has been adjourned until Friday 3rd May for lawyer submissions.