Pacific Games in partnership to go all green

The Pacific Games Office (PGO) has signed a partnership agreement with the Ministry of Natural Resources and Environment (MNRE) and the South Pacific Regional Environment Programme (SPREP) to work towards making the 2019 Pacific Games green and plastic-free.

Leota said the partnership is not just between the stakeholders, but also between agencies of government, regional organisations and the Pacific Games Organising Committee uniting and realising the importance of introducing sustainability and ensuring sustainability in the Pacific’s premier sporting event.

"It’s been a short time since starting, however we’re happy today (Thursday) that we’ve launched the greening of the Games campaign as we see and prepare ourselves for more efforts to come in preparations for the Pacific Games," he said.

According to Ulu, the campaign looks at business modules across the event, and making strong stands in reducing the use of single plastic and waste, impacting catering and waste management preparations and plans.

Leota said they have been part of the problem and it is good to now become part of the solution.

"We’ve been part of the problem for too long. It’s time for us to be part of the solution. We want to encourage greener alternatives. Green business and green models for green businesses."

The two chairs of the sub-committee stressed the need for a legacy for other host countries to follow, and are confident they "pick up the baton from Samoa" as this had not been done before in a way that's been effective.

"I think it’s been a major challenge for Samoa given the small time that Samoa has agreed to host the Pacific Games and our sub-committee is very pleased and very happy we can be part of this very important regional initiative.

"We are confident that through the greening of the Games that there will be important lessons learnt that we can pass on to other sporting events like this.

"But this is an opportunity not for Samoa but for the region to demonstrate that we here in the Pacific can have Games that will enable better management of the impact of the environment," added Leota.

Leota said with the expectation of 4,000 athletes and officials in Samoa, the committee is looking at ways to encourage the participants  to engage their athletes in practices such as tree planting to help reduce carbon footprint.

"Not just reducing carbon footprint, but ensuring that we can work as much as possible to reduce and eliminate single use plastics and as you heard from Ulu, the government of Samoa has introduced legislation to ban that but it’s not just us, there is a great momentum happening in the region and globally speaking where people are getting to realise the serious impact of using single use plastics.

"We are really confident that during these Games, through other partners who are involved in the provision of water and also catering our food, we will be able to demonstrate that we can reduce and eliminate single use plastics and containers for food in terms of styrofoam and also plastic water bottles. We don’t want to see any of that during the Games," stated Leota. 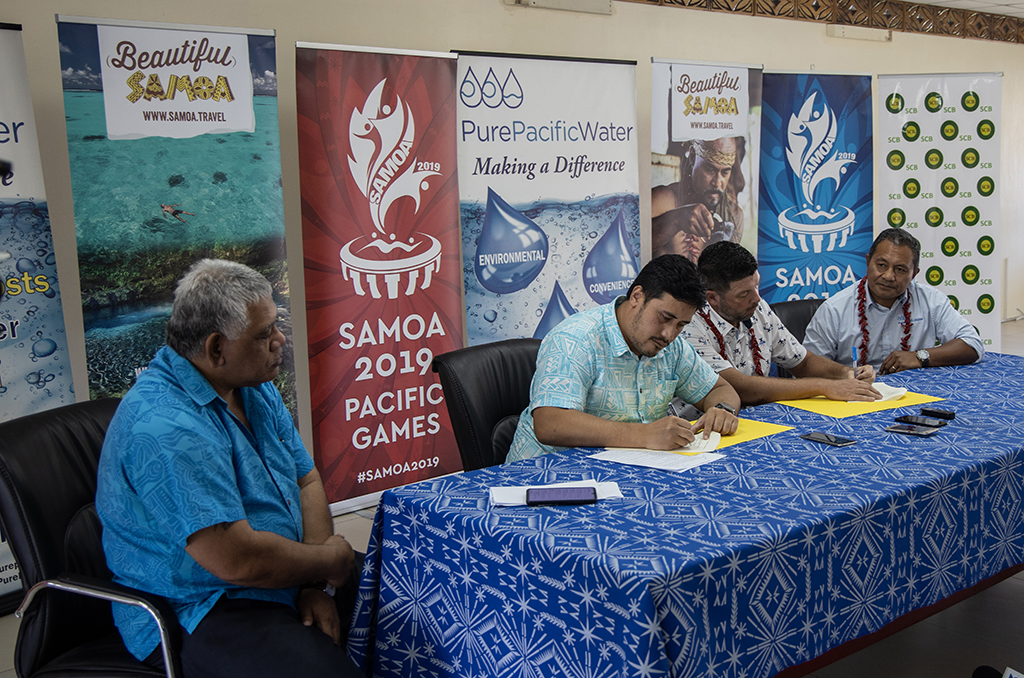 The M.O.U. was signed by Falefata and Pure Pacific Water Operations Director and Sales Director, Lucky Seumanu and Neal Stephens.

Pure Pacific Water will be providing $109,000 worth of sponsorship through the provision of water coolers for the Games.