The United States Ambassador to Samoa, Scott Brown, visited the local Muslim leadership this week to express his condolences over the terrorist attack on the Muslim community of New Zealand earlier this month.

On the 15th of March, 50 people at prayer were killed by a terrorist at the Al Noor and Linwood Mosques in Christchurch, New Zealand.

As the joint Ambassador to both New Zealand and Samoa, Mr. Scott made the trip with his wife Gail Brown to Samoa this week to meet Imam (worship leader) Laulu Mohammed Daniel Stanley and discuss the attacks. 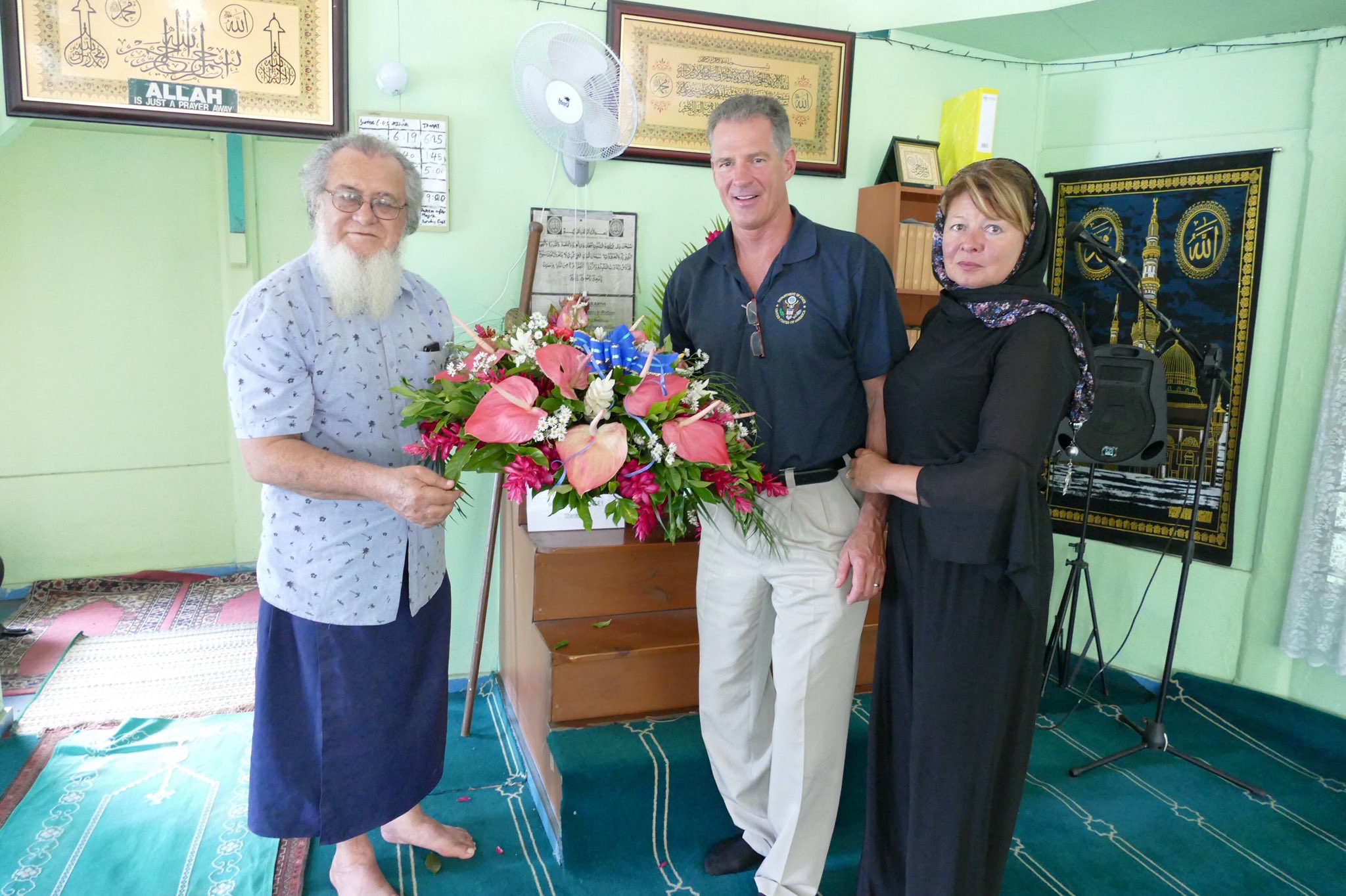 “We felt it was important to reach out to the Muslim community here – to offer our condolences, condemn this hateful act of terrorism and underscore our solidarity with Muslims around the world,” Mr Brown said. In New Zealand, they visited the Lower Hutt Islamic Centre and the Kilbirnie Mosque in Wellington to spend time with the community, "hanging out, listening, and just getting to know folks."

Mr. Brown said the way this act of terrorism has rippled internationally has made an impact on him. The murderer attacked all of us, he said: “our sense of decency, our values, and our humanity.

“This terrorist sought to divide us, but he has had the opposite effect.”

Laulu said he was happy to receive Mr. Brown, and talk to him about the attack.

He said Mr. Brown gave him a United States medallion, and thanked him for being an 'Ambassador of the peace.'

"I have great belief in his conviction," Laulu said. "I firmly believe he is genuine, being a former Army general. And he wants to know, if I see any sign of anyone causing something, throwing even a stone, to tell his Chargé d'affaires."

The reaction internationally has been seen in the relentless coverage across all forms of news media. In the United States, the New York Times even called the attack “an American Export” in a piece about mass shootings, and the gun legislation debates that inevitably follow.

Damien Cave, the NY Times Australian bureau chief wrote: “Indeed the lack of legislative effort by American lawmakers on the issues that helped spawn the Christchurch attack — guns, racism and tech platforms — is no longer just a frustration in the United States. Now it wounds the world.”

Mr. Brown said he rejects the notion that the shooting in Christchurch was as Mr. Cave describes, reiterating that the United States condemns the violence in the strongest possible terms.

“Extremism has no nationality, no skin color, no religion,” he said.

“We must all be vigilant and stand together against anyone who preaches hate and seeks to divide us one from another. We must work together and ensure that they fail. We stand in solidarity with the Muslim community.”

He said following the attack, he spoke with President Donald Trump at length, who underscored his concern and offered to help in any way that was requested.

Donald Trump himself has been surrounded by controversy regarding his attitudes towards the Muslim population, from his travel ban on mostly Muslim countries, to his alignment with alt-right website Breitbart and its editor Steve Bannon.

And on the day of the attack, his immediate response to it “failed to mention Muslims, Islam, Islamophobia, white supremacy, racism, bigotry or violent hatred that targets people based on their religion,” The Nation writer John Nichols said.

“The President does not endorse terrorism of any kind. And that’s what this was,” Mr Brown said.

“The U.S. government has been very clear we reject this heinous brutality.  The President came out quickly expressing his condolences for the terrorist attack on innocent Muslims in prayer in Christchurch.”

A White House statement released on the attack reads: “The United States strongly condemns the attack in Christchurch. Our thoughts and prayers are with the victims and their families. We stand in solidarity with the people of New Zealand and their government against this vicious act of hate.”