The New Zealand flag is hoisted at half-staff in front of the New Zealand High Commission to pay tribute to victims of the Christchurch terrorist attack which has now claimed 50 deaths.

Security Officer Taavao Laufili of Top Security, who is stationed at the New Zealand High Commission premises on Beach Road, said he was instructed to lower the flag on Saturday morning following last Friday's horrific attack.

What appeared to be a simple task for Laufili meant more than just another assignment for him.

“It was a different feeling for me when I was asked to lower the New Zealand flag on Saturday,” Laufili told the Samoa Observer.

“It was not just another task I had to do. As I stood there and lower the flag I felt sad for the people that died in Christchurch, I felt sad as a human being that such evil exists and I felt sad that even in temples where they worshipped they are not safe.

“So to be able to lower the flag on behalf of the New Zealand High Commission, it was an honour to serve and pay my respect to the victims that died.”

The security officer said he was not aware of the incident in Christchurch, until he was given instructions by an official from the High Commission, and was told of what was unfolding in New Zealand.

As a man who works around the clock from day to day, Laufili does not regularly tune in to listen to the radio or watch the news on television.

However, when he was told about the terror attack in Christchurch and later watched it on television, he said his heart was heavy and he was saddened by the tragedy.

“Many people died on Friday and it is sad news for us, even though no reports said that any Samoan died,” he said.

“We feel for those affected and I keep them in mind when I raise that flag. I keep in mind that out of all the security officers working for the company, I am the one that is stationed here. I am the one that gets to hoist the New Zealand flag, and this is how I will pay my respect for those that died…this is my part and share in all of this and it is now more than another task for me.”

The New Zealand High Commission in Samoa has placed a condolence book at its office on Beach Road for people to sign. 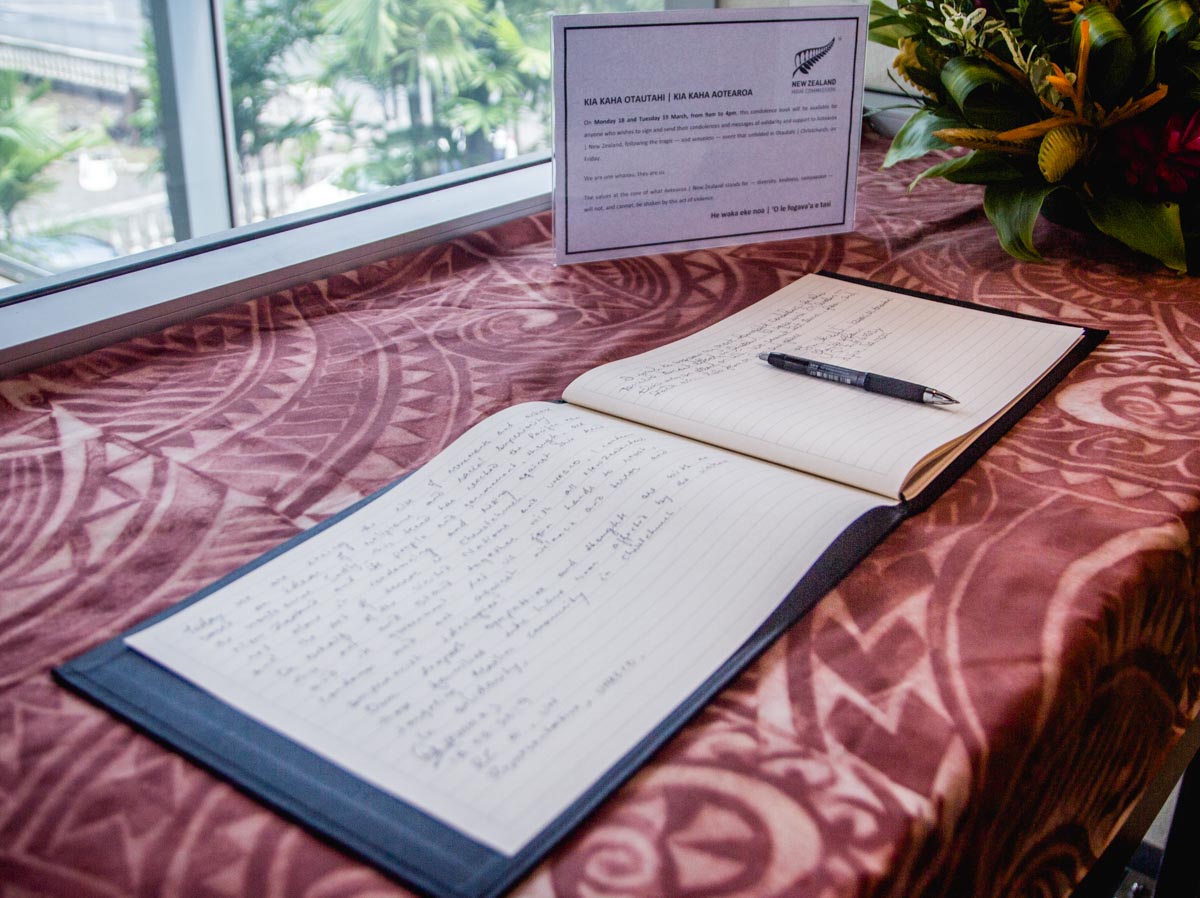 Anyone who wishes to send messages of solidarity and support to New Zealand, following the terror attack in Christchurch, can do so through the condolence book from March 18-19.

A statement from the NZ High Commission in Apia, which was also posted on its Facebook page stated: “On behalf of the New Zealand government, our office would also like to take this opportunity to acknowledge the sympathy and support we have received and are continuing to receive from our communities here and overseas in the wake of this tragedy; we hear you, we thank you, we feel your love.”