Described as iconic, modern and a cost effective building, the project was jointly funded by the government of Australia and Samoa, costing more than $25 million. 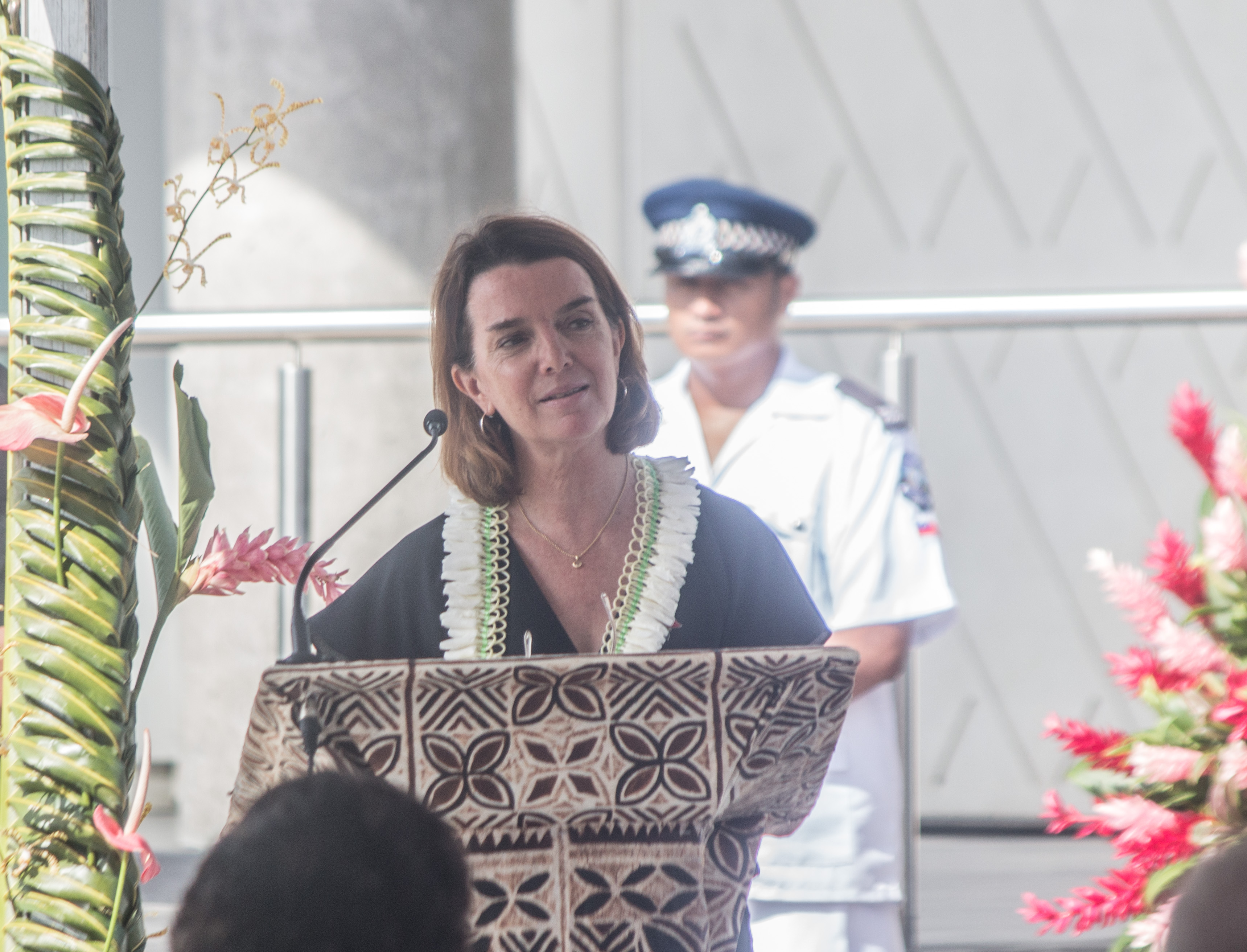 Reverend Aisoli Iuli, the Deputy Chairman of the National Council of Churches, conducted the prayer service, reminding the government that if Parliament gathers and speak in the name of the Lord, he will be there.

“Whether it is two or three people and they gather in my name, I’ll be there,” said Rev. Aisoli. 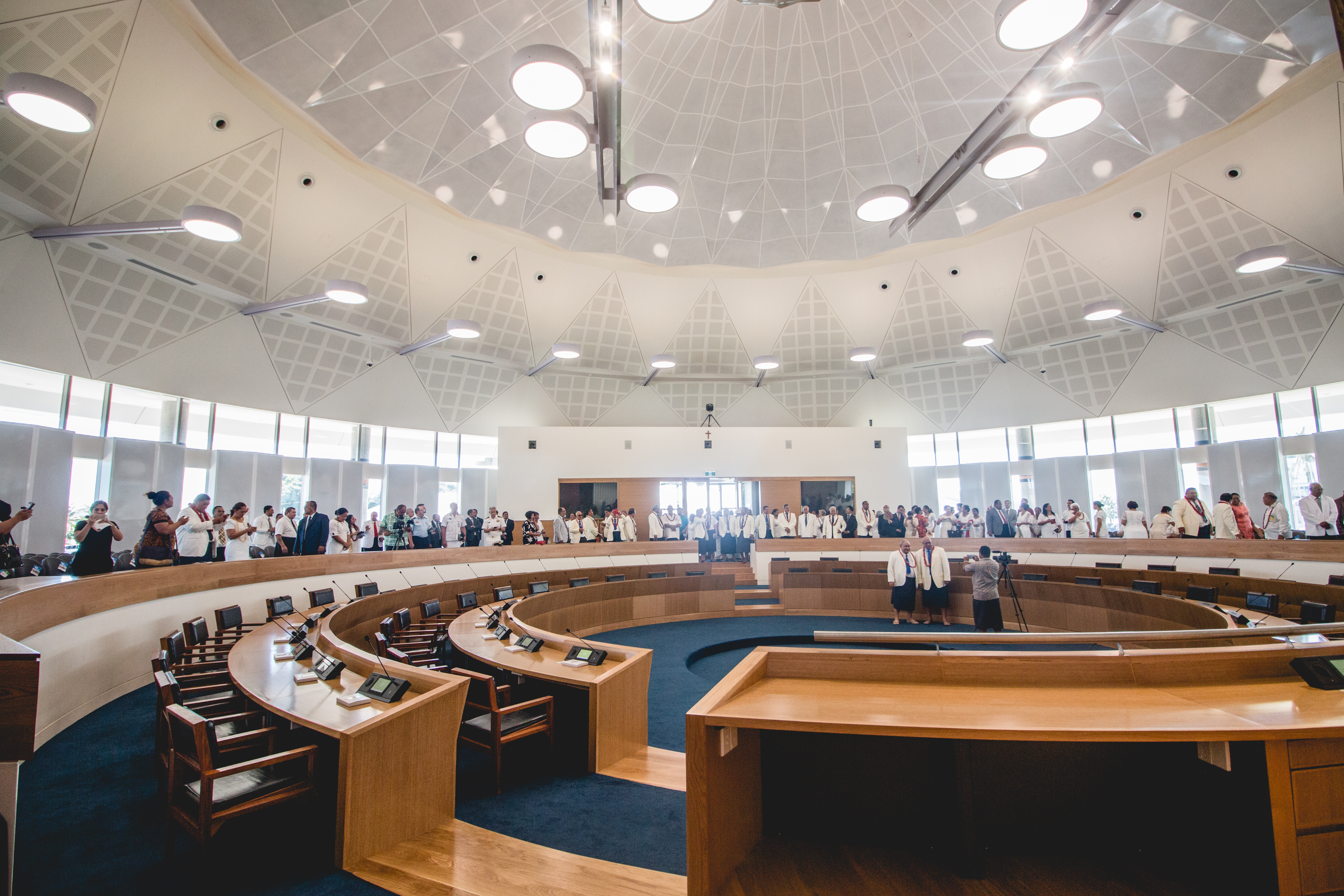 “It is also reflects the great skills of Samoan people, the tradesmen working together to create this building it’s a building for all Samoans.

“The government of Australia is proud of its involvement in this building.”

Senator Ruston applauded the architect of the building,  reflecting a Samoan fale. This is a symbol of Samoan culture and history.

In response, Prime Minister Tuilaepa acknowledged the contribution of the government of Australia. 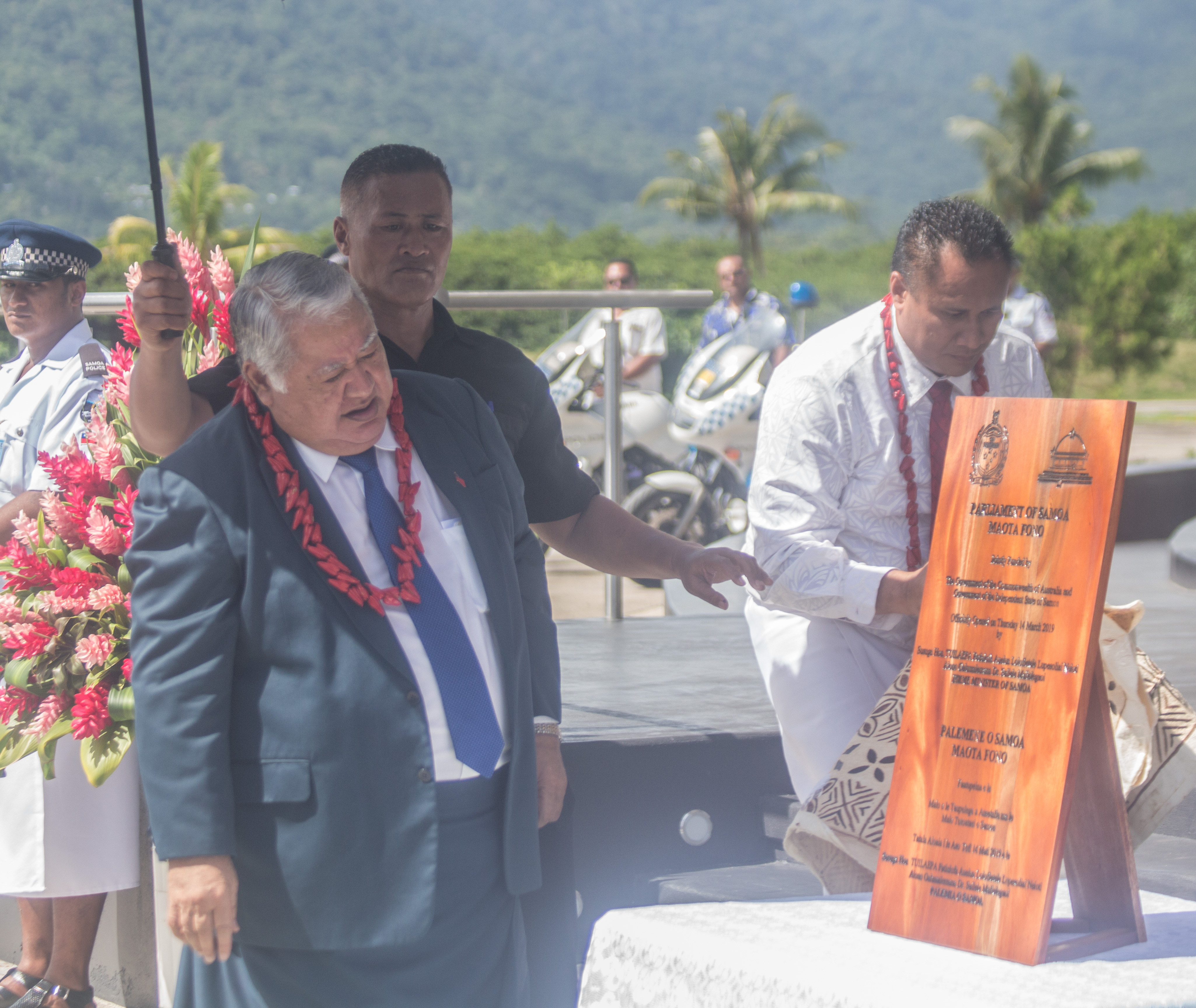 “This building is a symbol of Samoa’s long standing and enduring partnership with the government of Australia with this year being the 42nd anniversary of diplomatic relations between the two countries,” said Tuilaepa.

“Improved governance is a priority in the Samoa - Australia partnership for development. This new parliament building will ensure improved access for the people of Samoa to Parliamentary processes and will also support good governance strategy.

“The building is modern and cost effective, it is appropriately fitted out to support and meet the 21st century needs of Samoa’s Parliamentary processes and practices.”

He made reference to the concrete pillars on the exterior that are woven and decorated. The ceiling is inspired by the national flower, the teuila.

“The Parliamentary mace presented today is another example of how element of Samoan culture and history have been incorporated throughout this project. Though this new building is similar in infrastructure to the former building, the design of the chamber incorporates the use of natural daylight in a controlled manner.

But Tuilaepa also made it clear there are a number of items needed to complete the decoration of the new Maota Fono. This includes Members of Parliament chairs, the rug and the rug to furnish the inner circle of the chamber.

The Prime Minister also acknowledged former Speaker of the House, La’aulialemalietoa Leuatea Polataivao Schmidt, former Clerk of the Legislative Assembly, Fepuleai Atilla Ropati who were instrumental in initiating discussion and design of the new Maota Fono back in 2012.

He also commended the project Management Consultant, Manteena Company from Australia and other engineers, architects for developing the design and managing the construction of the project. 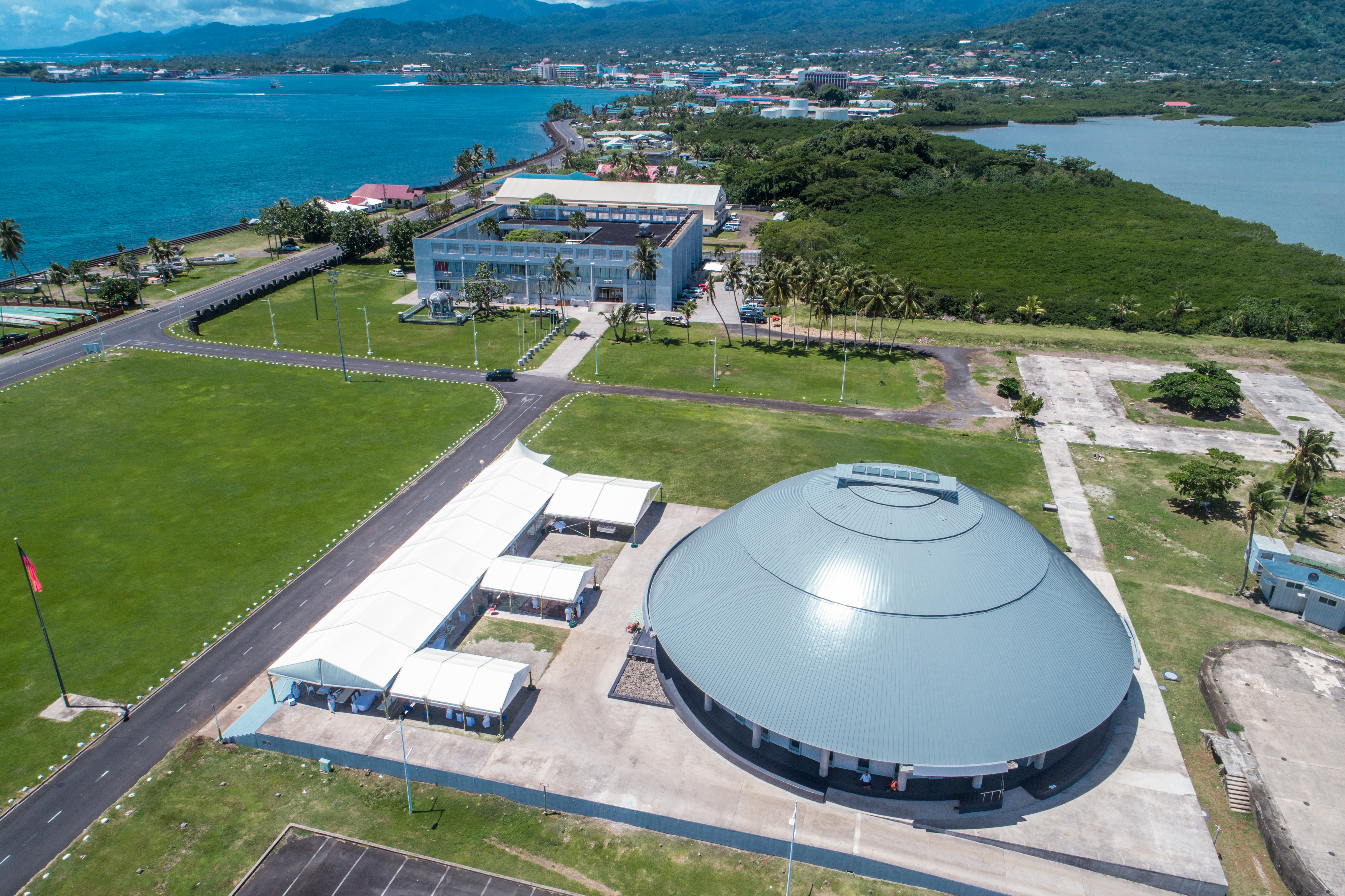 Asked for a comment, former Speaker and Member of Parliament La’auli was thankful for the milestone celebrated.

He said it wasn’t easy from the start finding donors to fund the project but it has come through.

“Australia was the first government to come in and assist us and we thank them and today it is a dream come true to see the third Maota Fono,” said La’auli. “We thank God for the accomplishment today and for another Parliament for our future.”

The first Maota Fono of Samoa dates back in 21 July 1916, constructed by master carpenter and foreman Solofuti Fili and his carpentry crew from Satoalepai Savai’i.

The construction was completed on the 18 August 1916 and the total cost of the project was €30 (30 pounds) which is equivalent to $60 tala paid by the government at the time for the work.

According to Tuilaepa, a sum of €10 was paid out to put down a Samoan fale (utupoto tolu) in Vaimea where the old prison was located to construct the new Maota Fono at Mulinuu.

Tuilaepa said it is not clear what STKK stands for but it appears it could have been a society of a Samoan cricket club led by Malietoa at the time. 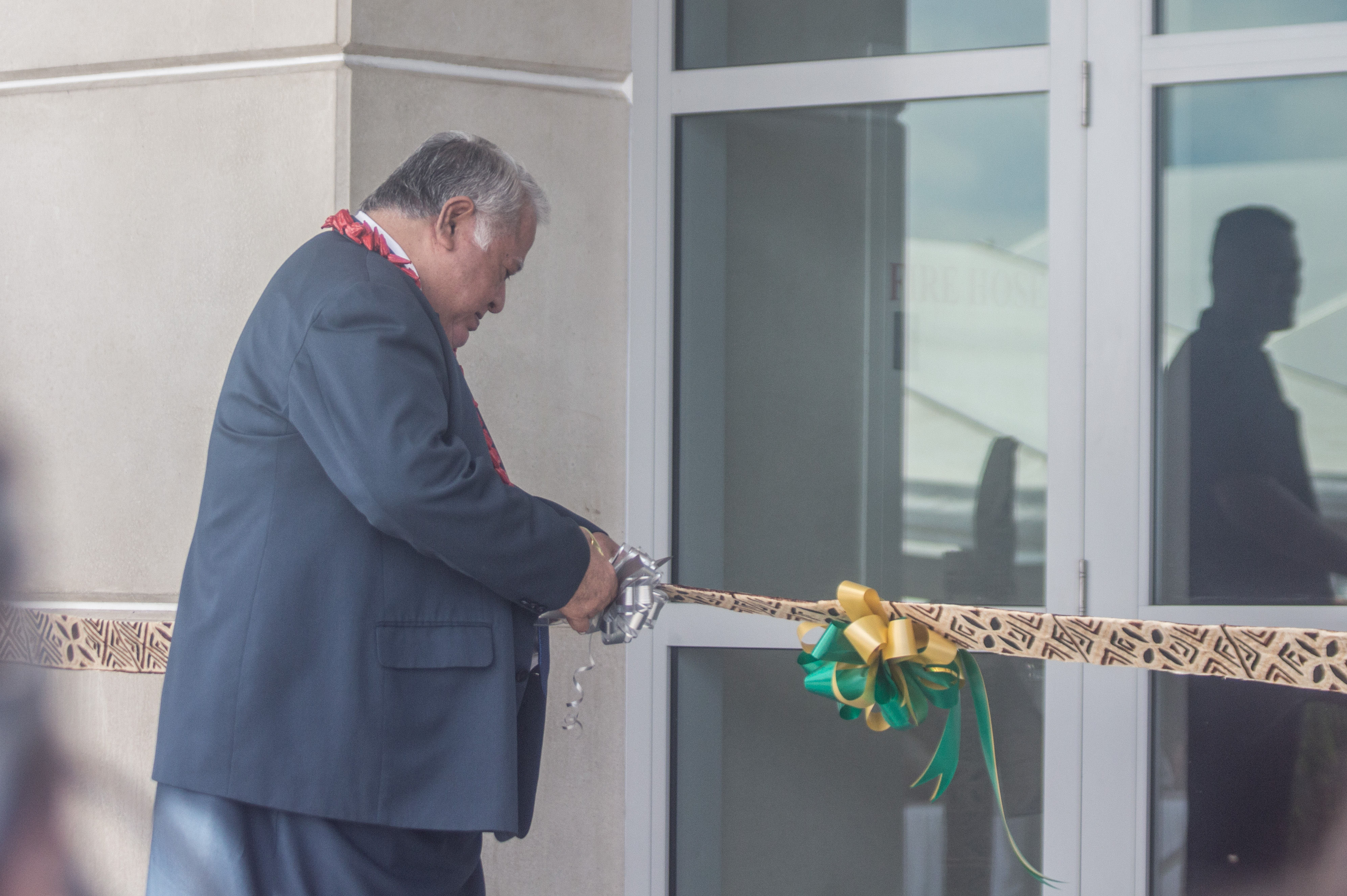 “The first design of the Maota Fono was drawn with charcoals (vaitusi). That building in 1916 was utilized during colonial times as a meeting ground for our Samoan leaders who aspired for self-determination.

“Additionally it was used in 1953 - 1959 by select committee to deliberate and formulate plans for Independence State of Samoa as well as overall development of the nation.”

Tuilaepa said significantly that building was utilized by the Fono Fa'avae or the Constitutional Convention to discuss and formulate the Constitution of the Independence State of Samoa.

In 1962, upon Samoa gaining its Independence, it was used as the first official Maota Fono for the Parliament of Samoa.

In 1972 the second Maota Fono was constructed and opened on 31 May 1972, a gift from the New Zealand government in celebration of Samoa’s 10 years of Independence.

The building was designed by a Canadian architect who incorporated certain cultural elements such as openness in the design of the building.

According to the Prime Minister it was noted that the maze for the 1972 Maota Fono was gifted by the House of Commons in Great Britain.

“Sources explained that Samoa ended up with two maces with the first one gifted from the Parliament of New Zealand in 1958 while the second was gifted from House of Commons of Great Britain to commemorate the official opening of the 1972 Maota Fono.”