Given Samoa’s strong Christianity beliefs – being an official Christian state at that too - it’s surprising it has taken this long for the Prime Minister to officially visit Jerusalem, the heartland of Christianity.

Apparently this visit was supposed to have happened a few years ago but it was cancelled for an undisclosed reason.

Still it’s better late than never and so last week, Prime Minister Tuilaepa was accompanied by the Chief Executive Officer of the Ministry of Foreign Affairs and Trade, Peseta Noumea Simi, and other officials for the trip. In Jerusalem, the Prime Minister met with his Israeli counterpart, Benjamin Netanyahu, who expressed delight and rolled out the red carpet to welcome Tuilaepa and Samoa as a “friend.”

“Prime Minister Tuilaepa, this is your first visit to Israel and I’m sure it won’t be the last because there’s an abiding friendship between Samoa and Israel, and we greet you here as a friend,” Mr. Netanyahu said during the meeting.

“You are being welcomed as a friend. I know that you’ve had time to visit some of the sites here. I hope you take some more time.

“You’ll see an ancient land with deep roots in our history, yet with a striving to seize the future for the betterment of our people and all mankind. In that sense we welcome you as part of our common civilization. Welcome friend, to Jerusalem.”

Note that Mr. Netanyahu repeatedly uses the word “friend” in his remarks which is quite endearing. The word is not often used in bilateral meetings as such but this particular word kept being used. But then Mr. Netanyahu had reason to. As a “friend,” Israel extended more than just their offer of support and funding where Samoa needs it.

One of the biggest achievements during this trip was the signing of a visa-free agreement between Samoa and Israel. Which means that from now onwards, Samoans are free to enter Israel any day for whatever reason. Israelis can do the same in Samoa.

This is a great development. Any Samoan who has been to Israel would know how difficult it was to try and obtain a visa but with the developments of last week, all we now need is a plane ticket and away we go. If only Israel were closer.

You see, when it comes to applying for visas to go anywhere, they can sometimes be a pain. And the Samoan passport is perhaps one of the toughest passports to travel with, requiring visas for just about every country – including a permit to enter American Samoa of all places. Even New Zealand, our so-called special friend with whom we share a Treaty of Friendship demand that all Samoans with Samoan passports queue up and their office, pay the visa fee and then pray and hope they grant them a visa.

But here we are today, linking up with Israel and being granted a very special privilege when it comes to visas. This is what friends do.

This is what the spirit of friendship looks like; it’s opening up your borders, making things convenient for friends. Friends don’t ask for permission to visit one another, they don’t need a special piece of paper to stop by. Friends just visit whenever they feel like.

Which is why this very significant development cannot be ignored especially given the growing number of Christian pilgrims from Samoa making trips to the holy land every year.

Folks, as Christians, the significance of Jerusalem and Israel in the scriptures, especially during these times, cannot be downplayed. Jerusalem is referred to as the “city of God” for a reason and Christians know this. People who bless Jerusalem and Israel are blessed in return. This is why it’s important for Samoa to be seen to be aligning itself with Israel, contrary to criticisms and what others say.

If anything, as far as Christianity goes, the agreement signed during Prime Minister Tuilaepa’s visit last week would be one of his and his Government’s legacies.

We live in a country where faith and beliefs, whether cultural or religion, dictate how we live. Christianity has been chosen by the leaders of this country as our official religion. This special connection with Israel could not have come at a better time.

“Our countries are on different sides of the globe but the friendship between us is deep and real,” Rivlin said. “We live on the same planet, breathe the same air and drink the same water and it is our shared responsibility to ensure that climate change does not destroy our world. Our researchers develop new ideas into that are changing the world. We believe these developments can benefit us all and we are happy to share them, as we are doing with you in agriculture and water.”

In response, Tuilaepa said: “Mr. President, thank you for welcoming me and my delegation to your beautiful country. Israel’s knowledge economy is well-known around the world and we want to make use of your achievements in many fields. The world is getting smaller and smaller and we look forward to greater interaction with you, and between Israel and the members of the Pacific Islands Forum (PIF).”

Tuilaepa added that Samoa would like to share in Israel's cyber know-how in order to combat fake news, which he said is disseminated by people who want to destroy relationships.

"You are far, far ahead of any nation in your research that prevents intervention,” Tuilaepa said, adding that “Israel is a great nation."

Well of course it is a great nation, regardless of what people and critics say and despite its faults, it still is the nation God had made a covenant with. And we know the Almighty is a covenant keeping God.

OPINION: The spirit behind the decision is noble but it is nowhere near enough. The problem with Samoa is that if the Government is serious about changing things, someone needs to tell them that we cannot just be “Sunday Christians” speaking “Christianese” and hope things will get better. 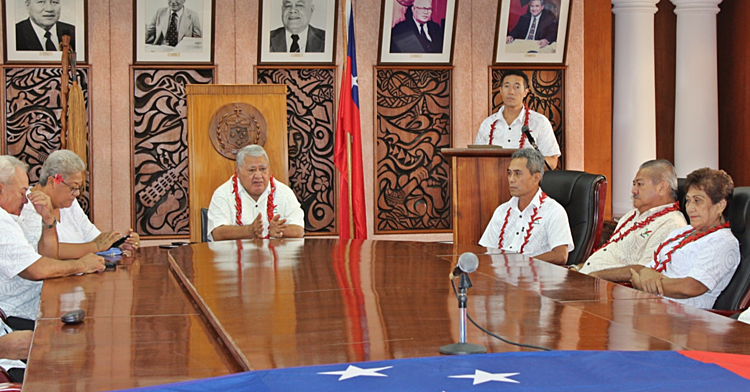 Oath to protect who? Samoa or the H.R.P.P?

OPINION: Let us remind them today that as Members of Parliament, they swore an oath to represent the people of Samoa and what is in their best interest. In other words, they are suppose to do what members of the public demand of them. In all the decisions they make.