Sports
Ele Opeloge with some of the students. (Photo: Misiona Simo)

Ten athletes ran a 90 minute session for Faatuatua's 14 and 15 year olds, to teach them the four ways to look after themselves as potential or maybe current athletes.

The initiative is a Pacific wide project, which uses athletes from a country to talk to its citizens about being healthy, safe and honest in sports. In particular, it speaks to anti-doping, HIV awareness and prevention, and the rights and responsibilities of athletes. 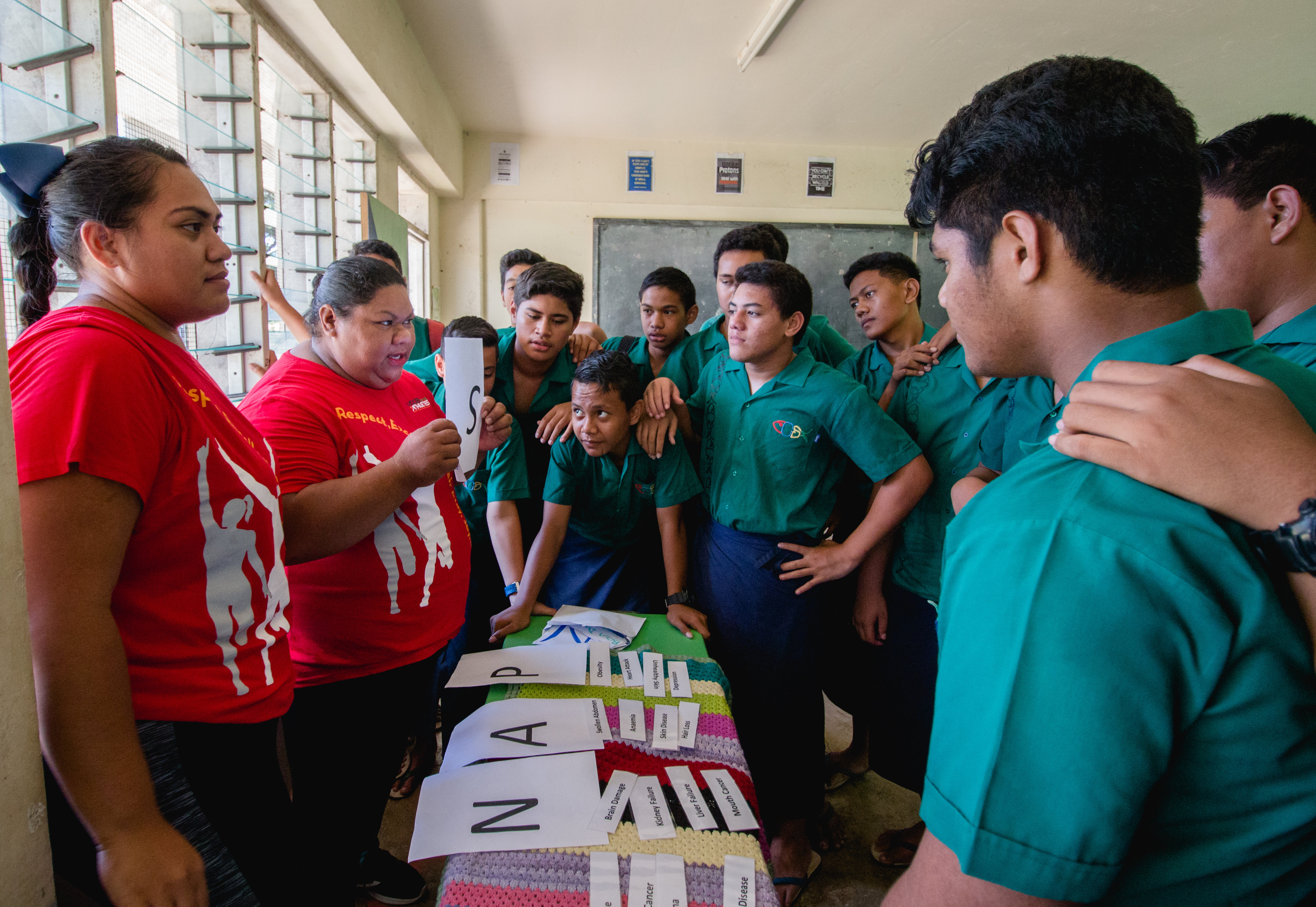 At Faatuatua, Fetuao Ierome and Joel Reti led the athletes in a fast pace station rotation exercise for the students, which the students appeared to love.

"There were a lot of questions and a lot of nerves on our way here this morning, and we weren't sure what to expect. But we could just fall back on our sessions plans, and it was great," she said.

"The students were great, they were very interactive with us which made the nerves just go right out the window."

The ambassador team spent time training in January and preparing right before yesterdays session, Ms Ierome said. Though hesitant at first, she quickly found a love for the work.

"To be honest, I came without knowing what I was really getting into but in our first session it was laid out to us and I thought: I can do that, I am going to keep coming.

"Obviously kids are very kinesthetic learners, very hands on, so we tried to implement that as much as we could to make it more interesting and to make them want to learn," Ms Ierome said.

The activities revolved around the "four pillars" of the Voices of the Athletes project: stay healthy, play true, play safe and go green. The Go Green pillar is especially important for the upcoming Pacific Games, Ms Ierome told the students.

The classroom rang with the students yelling the pillar's mantras, and the games they played to remember the messages they were being taught. In one corner, students had to guess how long a plastic bag, a tin can, and a plastic bottle take to decompose.

Team Samoa's chef de mission Nynette Sass is the regional master educator from ORADO, who, among others, trained the athletes to run the sessions at schools. Yesterday she and the other educators supervised the team in their first real experience in the job.

Exploring the issue of doping in sports with students can be tough. But the students all appeared engaged and interested, in the ten minutes they had to learn the basics.

"Its not worth it. This is the message we are trying to get out to young people, well before they get into competitive engagements.

"This is what the Athlete Ambassadors are doing: sharing with the young people as they grow into sports, that they will be aware of their rights and the need to play safe and not use drugs," she said.

The work will carry on right until the Pacific Games, and ideally in perpetuity, Ms Sass said. The Voices of the Athletes initiative will have an international presence at the Games.

"It's a great opportunity where you have got a captive audience to talk about the athletes and protection of the athletes," she said.

But as well as the rights and responsibilities of athletes like knowing how to avoid the spread of HIV and the use of doping in sports, the messages about healthy eating and a healthy environment are just as important.

The rapid rise of non-communicable diseases (NCD's) in Samoa needs to be addressed at a young age, Ms Sass said.

"It's all very well - we talk about eat the rainbow or whatever, we have so many things but this is going to try bring it home so people understand the impacts of not eating healthily on your performance as an athlete."