There was commotion outside the District Court yesterday when Malele Atofu Paulo known – also known as King Faipopo on social media – and Talalelei Pauga appeared for mention.

More than 20 supporters of the men tried to push their way into the Courtroom during the hearing of the matters.

However, several police officers stood their ground and controlled the crowd, and said the Courtroom was full while asking the supporters to allow the accused inside first.

There were several long chairs inside the Court that were empty.

Unhappy at been told by the police to stay outside, Samoa Solidarity International Group (SSIG) supporters as well as family members of the accused continued to make noise outside the Courtroom.

They accused the authorities of injustice, bias and abuse.

Bystanders and the supporters of the pair pulled out their cell phones and took to social media to express their frustration.

Inside Court, Paulo took the accused stand and was represented by lawyer Unasa Iuni Sapolu.

Prosecutor and lawyer Iliganoa Atoa told the Court there are 13 charges against Paulo. The charges stem from video posts on social media by Paulo, where he allegedly made a false statement with intent to cause harm to the reputation of the Prime Minister Tuilaepa Dr. Sa'ilele Malielegaoi.

Unasa then sought the Court’s indulgence to have her client remanded without plea, as she had just received the 13 charges yesterday morning.

“I need to go through it with my client to seek instructions,” said Unasa.

“I would also like to add the information in copies received contains no reference number that is relevant and there are similarities in some charges.”

During the course of the proceedings, Paulo constantly turned to look at people inside the Court and waved at some of his relatives.

Judge Roma then adjourned the matter to Tuesday March 12, 2019 for the prosecutor to finalise the charges and for Unasa to seek instructions from Paulo.

Pauga, 41, who is accused of making a false declaration on a passenger arrival declaration card was next on the list.

He is charged with false declaration on the arrival card on January 19, 2019 claiming that he has never been convicted of any crime punishable by law.

Again, Unasa asked the Court if the matter could be adjourned to give her time to seek instructions from her client.

She asked for Pauga to be remanded at liberty.

Judge Roma granted the request and adjourned the matter to next week.

After the Court proceeding, Unasa expressed frustration at the supporters of Paulo and Pauga not being allowed by the Police inside the Courtroom.

“There were chairs available (inside). I deliberately delayed it (mention for Paulo and Pauga) to be called last to allow for their families and supporters to be inside Court. But this was not the case and they were supporters and families from Savai’i, Manono and Aleipata who were not allowed inside.” 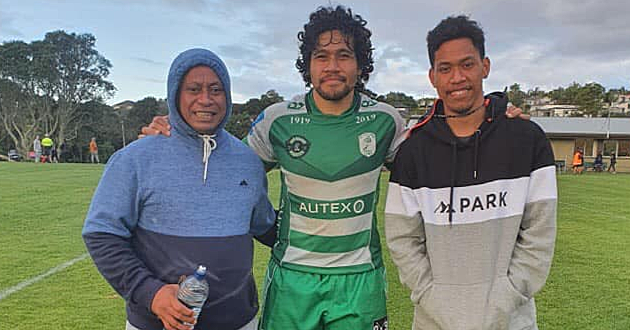 Father and share special moment as they leave quarantine

A father and son of Tufulele who were released from quarantine on Saturday (today), share special moment as they reconcile with their families at friends at home.

Three passengers that were isolated at the national Moto’otua hospital after presenting flu-like symptoms will undergo COVID-19 testing before their quarantine term of 14 days is over.