The life of the owner of Cece’s Bingo, Augustine Fuiavailili Fe’esago, who is one of the biggest contributors to the Samoa Observer’s Save the Child Fund, was celebrated yesterday evening at Si’usega.

Families, friends and all those who knew the lovable father, grandfather and businessman gathered there to pay tribute to his life and work during his final service at the Catholic Church.

“He was a family man,” he recalled. “He loved his family very much especially his wife and his children. He loves anyone and everyone who comes to him for help. In his eyes, everyone is the same to him.”

Ulī said his brother spent a large part of his life in the United States where he developed real knack for hard work and to help people.

“When they were in the States, he helped out the Non Profitable Organisations and even when they moved here, he contributed a lot to his church and the Home of the Elderly at Mapuifagalele.”

But Mr. Feesago was not just a man with a good heart. He was also an astute businessman.

He established Cece’s Bingo in Samoa in 1994. The company has grown to play a major role in church fundraising activities over the years.

He also owns fashion stores like Big n Small of Samoa as well as Charter Service in Los Angeles which provides tours for tourists between the states, especially to Las Vegas.

Mr. Feesago was married to Margean who remembered him as someone who was passionate about helping people. During her eulogy, she said their journey was not always a smooth one.

“My relationship with Aukuso was no smooth ride,” she said. “But we tried our best to develop our family.

“When I married Aukuso, I had no idea about any fa’asamoa because I was living in the States and so I didn’t really learn any fa’asamoa.

“So when I married him and we went to his family, I saw that his family was a hundred percent Samoan style. I was worried because I didn’t know how I was going to cope.

“But then his mother taught me how to do the ietoga (fine mats) and all the Samoan culture, so I want to thank his parents, his brothers and sisters for the knowledge that I now know of the fa’asamoa.”

Mrs. Fe’esago also recalled the time when they moved to Samoa in 1994.

“In 1994, we moved Samoa because when Aukuso came here to visit he came back and told me that there were no bingo papers here in Samoa,” she said.

“We didn’t have any plans about moving to Samoa until he came back after his visit and told me that he wanted to come here. It was difficult during those times.

“My husband would sleep on those bingo papers, my children were being teased and people called them “bonanza” but it didn’t bother us because we were working so hard to get to where we are right now.

“When my children were hungry, they would go Muliaga Jean for (aitalafu) for food until the end of the week then I will go and pay it off. That was the life we lived for three years and the struggle we went through during those times until the business was successful.”

Margean acknowledged many people who have helped their family over the years.

“Thank you very much for helping me, my husband and our children during those difficult times,” she said. “I also want to thank especially to my employees, I don’t call them my employees but I refer to them as my children. Thank you for being there for me during this difficult time.”

Lastly, to her husband, she said: “To my beloved husband Aukuso Feesago. I love you with all of my heart. Wait for me until the day I come then we will meet again, with love from me your wife, children and great grandchildren.”

Augustine is the 3rd child of the late Uliefu Savaiinaea Iosefo and the late Siapotaga’i Feesago’s five children.

He married Margean Petersen in 1977 in California, U.S.A and they have nine children, seven biological children and two adopted. 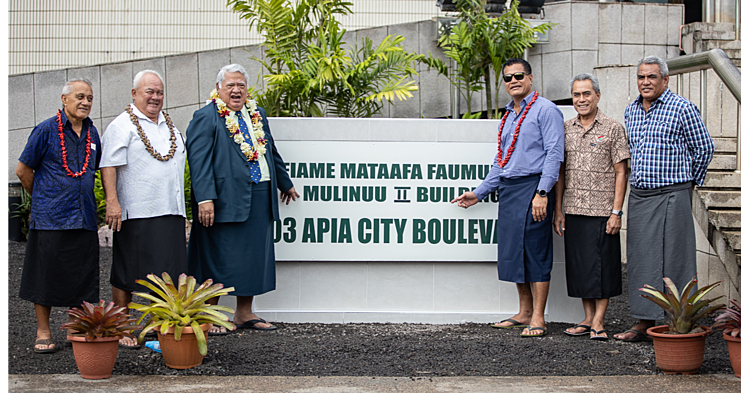 The Government has unveiled a concrete monument sign outside the Fiame Mataafa Faumuina Mulinuu II (FMFM II) building, to mark the official launching of the project to map roads and street addresses in Samoa.

The only All Saints Anglican Church in Samoa has held a church service to mark the last use of their parish hall before its demolition next week.