The decision by the Samoa National Provident Fund (S.N.P.F.) to lend millions to foreign-owned companies has come under heavy scrutiny from members of the public. They want to know why the Fund has loaned these millions to foreigners and what guarantee they have the money will be paid back. What do you think? Do you support the Fund’s decision to lend these millions. Fetalai Tuilulu’u, Se’ia Soloi and Aruna Lolani asked some members of the public in today’s Street Talk and this is what they said:

If we think about it, our farmers and those who work on plantations cannot make big loans like these because they are not able to. So I don’t think they know anything about annual reports which the N.P.F. is telling us to go and read.

Anyone like them, like me, it takes how many weeks to try and get a loan from them. My husband doesn’t work but he has a plantation of vegetables and he works so hard on it so he always go and take $10 tala for his contributions in his N.P.F. So we had a fa’alavelave one day and he’s been trying to get a loan but they said he can’t get a loan because he’s not working. So I asked him what about his N.P.F. contribution? We still couldn’t get a loan.

So he gave up. I thought we can rely on S.N.P.F. but I was wrong. So thanks to the Samoa Observer for questioning this issue because someone like me (shopkeeper), I have been going to N.P.F so many times to apply for a loan because school started and I needed money for my kids but they said they needed a letter. It was just hard to get things like that in my situation.

This is not right and I don’t support the idea. If it was lent to our people and our economy gets something out of it, I would support it because it would be a good investment and our people will benefit from it.

Think about it, a lot of Samoan people have been sweating to get that money. But whatever the N.P.F. is doing, I don’t support this. This is a huge loss for Samoa and the S.N.P.F management should be ashamed.

What the S.N.P.F is doing is wrong. How can a Chinese man win a tender for the Vaitele market and he goes on to get millions more from our Fund. I work hard and that’s why I don’t like what’s happening. I mean if these foreign people can loan this huge amount of money from Samoa, what do we get in return? And what happens if they skip the country tomorrow, can the S.N.P.F recover the money.

I am very disappointed about this. This is our country’s money. I mean, Samoans are in a great need of money, big time, and N.P.F. is just loaning away money to the Chinese just like that.

This is all just messed up. What about what our people? Would they lend them millions too if they wanted?

Most of our money going to other people rather than us? This is not right. I haven’t even withdrawn my N.P.F. money.

All throughout my working life I’ve never touched that money and now I am old and I’m hearing the N.P.F. is lending away millions to foreign people. This is just not right. 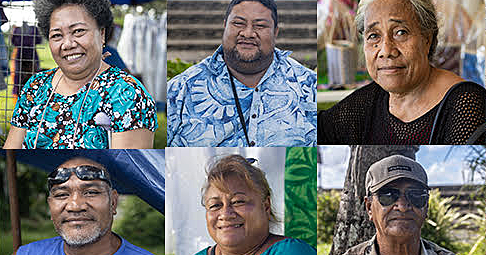 The Head of State on Tuesday revoked the April 9 general election results and ordered another election on 21 May. Reporter Krystal Selwood Juffa and Photographer Anetone Sagaga talk to members of the public and this is what they said: