Either Fiji or New Zealand has featured in 33 of the last 35 Hong Kong finals, and together in 14, some of them classics, but this pool match was competitive only until halftime.

Vatemo Ravouvou and Kalione Nasoko dotted down for Fiji in the first two minutes, while Amanaki Nicole replied for New Zealand to trail 12-7 at the break. Fiji coach Gareth Baber then told his players to control possession and they listened.

New Zealand hardly touched the ball in the second spell as Fiji scored 38 straight points, six more tries. Eroni Sau started the half with two, and Josua Vakurunabili and Amenoni Nasilasila went over with Alosio Naduva finishing the last two.

"The black jersey gets the emotion stirring because of the history," Baber said. "It was no different today. We told the boys to play how they always play against the black jersey."

Fiji, going for an unprecedented fourth successive Hong Kong title, will play Argentina in the quarterfinals on Sunday. New Zealand, second in the pool, will face the United States. South Africa, the world series leader which has never won Hong Kong, meets surprise side Spain, and Kenya tackles Scotland.

South Africa was the only other side apart from Fiji to win all three of its pool matches. The South Africans eliminated four-time champion England 33-15.

Scotland defeated South Korea 61-7 to put the pressure on England, which had to beat South Africa by seven to advance, instead. The English led South Africa 5-0, 10-7, and 15-14 but when South Africa went in front 19-15, England's Alex Davis was sin-binned and South Africa used the extra man and space to run away with converted tries by Mfundo Kevin Ndhlovu and Stedman Gans.

Spain, which beat Australia on Friday, was blanked by Kenya on Saturday and had to beat Canada to reach only its second quarterfinals, and first since 2012. At 12-12, Francisco Hernandez chipped over the Canadians into space and the ball was pouched by Pol Pla, who slipped one defender to score the 17-12 match-winner.

Kenya advanced despite losing to Australia 28-26 in its last pool match, while the United States beat Wales 47-5 and Argentina 31-17 after drawing with France on Friday. 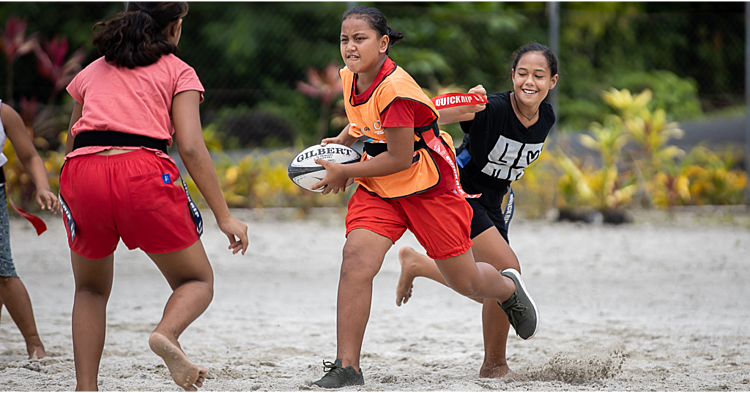