Sylvester Stallone, left, poses with Philadelphia Mayor Jim Kenney in front of the Rocky statue at the Philadelphia Art Museum for a 'Creed II' photo op, Friday, April 6, 2018, in Philadelphia. The film, part of the 'Rocky' film franchise, will be release (Photo: Samoa Observer)
AP
By Associated Press, 07/05/2017

PRETORIA, South Africa (AP) — The Crusaders powered on in Super Rugby, smashing the Bulls 62-24 in South Africa on Saturday for an emphatic 10th win from 10 to return to the top of the standings.

Making one of the biggest statements of the season, the rampant Crusaders scored 10 tries — five in each half — and were going at a rate of a point a minute when center Jack Goodhue chased down a kick through for his second try and the visitors' eighth for a 50-3 lead.

The Bulls' Loftus Versfeld stadium was once an impenetrable fortress. But the way the Crusaders dismantled the Bulls, starting with flanker Pete Samu's try in the fourth minute, reinforced the New Zealand team's status as clear favorite for a record-extending eighth Super Rugby title.

The Bulls are three-time champions but it was their heaviest Super Rugby defeat at home, and they were flattered by two late tries.

The Crusaders' huge win took them back top after the Lions temporarily led Super Rugby following a 47-10 win at the Melbourne Rebels, the Lions' record victory over Australian opposition. The Christchurch-based Crusaders are four points clear of the Lions and New Zealand rivals the Chiefs.

Also, center Charlie Ngatai scored a try to mark his return to Super Rugby after a yearlong fight with concussion as the Chiefs beat the Queensland Reds 46-17.

And the Blues continued New Zealand sides' domination of Australian teams, beating the New South Wales Waratahs 40-33 after leading 26-0 at halftime. The Waratahs managed a bonus point with a late try after outscoring the Blues 33-14 in the second half.

Australian sides have lost all 17 matches against New Zealand opponents this season.

Teenage flyhalf Curwin Bosch collected 20 points including one of the Sharks' four tries in a 37-12 win over the Western Force, although South Africa's Sharks failed to secure a bonus point at home against the Australian strugglers.

For the Chiefs, one-test All Black Ngatai was concussed a year ago and endured a difficult recuperation as symptoms persisted, interrupting his budding international career.

In his first match since that injury, he made an impact with a 35th-minute try which helped the Chiefs to 20-12 at halftime, and eventually to a six tries to three, bonus-point win.

The Johannesburg-based Lions' 47-10 win over the Rebels wasn't only its best-ever performance in Australia, it also gave them a club-record seventh straight win. The Lions scored seven tries to one — including a penalty try — to improve their record to 9-1.

Points were hard to come by at first. Almost 20 minutes elapsed before flanker Kwagga Smith scored. Jantjies kicked the first of his five conversions — not counting the automatic conversion of the penalty try — and the Lions began to build scoring momentum.

Scrumhalf Ross Cronje darted in for a try six minutes later which doubled the Lions lead.

The Rebels struck back through center Tom English after a midfield break by Amanaki Mafi and as halftime approached the Lions led by 14-7. But a try to winger Courtnall Skosan immediately before the break made the halftime lead 19-7 and the Lions entered the second half with the confidence to pursue a running game.

At Sydney, Israel Folau broke the longest try-scoring drought of his five-year Super Rugby career with two second-half tries for the Waratahs, but the star fullback's first strikes in seven games were not enough against the Blues.

Rieko Ioane scored a pair of tries for the Blues, and flyhalf Piers Francis added 20 points from four penalties and four conversions. 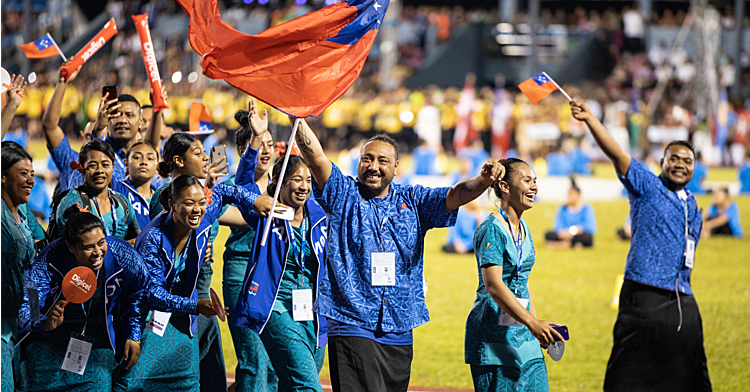 The Samoa Association of Sports and National Olympic Committee are building the capacity of Samoa’s sports team managers through the Oceania Sports Education Programme.