Tuilaepa offered the acknowledgement during the visit by Australia’s Foreign Minister, Julie Bishop.

Among her official engagements was the unveiling of a Time Capsule to be buried at the Parliament building. The time capsule contains official memorabilia related to the construction of the new Maota Fono to be opened when the building is to be demolished for reconstruction.

“This occasion continues to demonstrate the close and long standing partnership between Samoa and Australia,” Tuilaepa said.

“In saying that I acknowledge with great gratitude the immense contribution by Australia to Samoa’s development goals and its strong collaborative efforts to ensuring ongoing and improved access for the people of Samoa to parliamentary process.”

Speaking about the Time Capsule, Tuilaepa said: “In respect of our own Samoa tradition a Time Capsule is buried at the cornerstone during the laying of the foundation of a new building and to be dug up only when a building is demolished for reconstruction.”

“The Time Capsule would contain the names of all those who were involved in the planning design and the construction of a building.”

“Similarly this Time Capsule would contain a group photo of all who were gathered here today. A collection of memorabilia to be kept inside this capsule will be sealed up when the construction of the building is completed and the building is commissioned for use this year.”

The Prime Minister added that he was delighted by the announcement that Australia will fund the design and reconstruction of the Office of the Legislative Assembly.

“Today we are grateful to the Government of Australia for their favorable response to a request to fund the reconstruction of the Legislative Assembly office to support the new Parliament building.”

“The Master Plan for the Redevelopment of the Parliament complex formulate in 2012 considered the demolition of the old Legislative Assembly Office in 2015.”

“This year, the Government of Australia funded a Scoping Study for the Legislative Assembly offices based on onsite investigations and extensive consultations with the Parliament offices.”

“Indeed even as we look back and appreciate how far we have come over the last 56 years, the Parliament of Samoa must continue to remain forward looking and pray God’s blessings on the successful completion of the remaining construction works.”

Prime Minister Tuilaepa presented Ms. Bishop with a gift as a gesture of Samoa’s appreciation for the generosity of Australia’s Government. 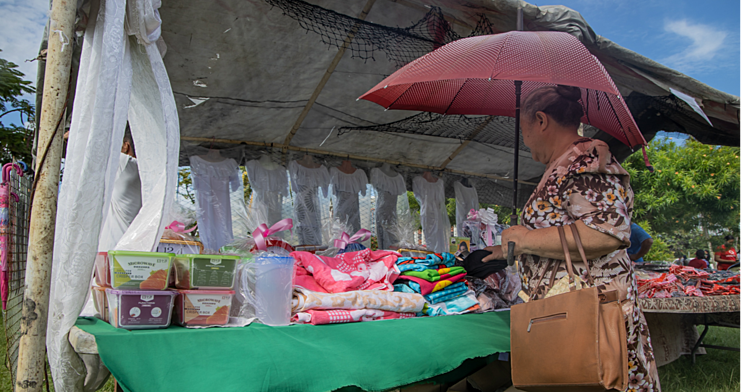 Some 42 safety sea grab bags have been donated by the United Nations Food and Agriculture Organisation of the (F.A.O.) to the Government of Tokelau to ensure the safety of local fishermen.