If all you need to work is high speed internet, choosing your headquarters should be pretty easy: just pick somewhere to live.

According to self-described “digital nomads,” or remotely working professionals, Samoa’s connectivity and low cost of living make it a perfect choice.

Sophia Ritchie (New Zealand) and Mathilde Kraft (France) spend their weekdays, like many of us, at a desk, but rarely the same one. Their occupations allow them to work anywhere the internet is good enough, and most days, that means any café with good coffee, and a power point.

A digital nomad is a flexible worker who uses the internet or a phone to do their work. The option has been taken up extensively in the last decade, as high speed internet connects countries around the world.

In 2017, a Gallup survey revealed 43 per cent of employed Americans said they spent some time working remotely, and more often as well. While some choose to work from their homes, others venture further.

Here in Samoa for a number of months on tourist visas, Sophia and Mathilde say for them, it is the perfect working holiday.

“Anytime we’re not working we’re basically on vacation,” said Mathilde, who is writing her master’s thesis here after working as an intern in Samoa last year. She said the lifestyle brought her back.

“I am way happier here than I would be doing the same thing at home, where it’s winter,” she said.

Sophia is a software developer, and works part-time for a start-up in New Zealand and freelances on the side. Her grandparents are from Lotopa and Saletoga - just one of the reasons she was drawn here.

“I want to stress how good the lifestyle is. What have we done in the last two to three months? Snorkelling, staying in fales, we’re gonna go diving, we’re going to Savaii, we’ve been to American Samoa.

“There is no way I could work 20 hours a week in New Zealand and live as well as I do here,” she said.

Digital nomads choose their homes according to several factors, and compare them for each other on nomadlist.com. One of those important factors is the cost of connectivity.

According to Sophia, internet costs in Samoa are still relatively high compared to New Zealand, and certainly the top rated countries on nomadlist. She spends around T$100 per month for 25G of data.

“At home you pay for a month of unlimited data between four or five people in your flat,” she said.

“So to pay nearly NZ$60 per month on data is nearly three times the price.”

But coming from Auckland, Sophia is paying four times less in rent to live in Apia. So the living costs balance out, and you get to live on a beautiful island, she said.

Internet speed and quality are important to productivity, so with average speeds of 26 megabits per second, both Sophia and Mathilde say they can do everything they need.

“When I looked up Samoa’s data speeds, what I saw was from before the [Tui-Samoa] cable. It was about 2 megabits per second, and I was very worried, because that would be completely unliveable,” she said.

So far, the only issue has been the connection cutting out occasionally, which doesn’t affect her freelance and development work because she can wait for the connection to return before uploading to the cloud.

But more deadlines and frequent conference calls would be a different question, Sophia said.

“At the moment, if I have a skype meeting I come to Sheraton because the Wi-Fi tends to be more reliable, even though it’s slower.

“It would be embarrassing if the internet cut out during a skype call, when I’ve told my employers the internet is good enough for me to work here.”

But other countries are starting to be fully covered by fibre, which has internet speeds of 100 megabit per second. The speed and price may still deter bigger companies from setting up shop and employing dozens of people here, but an extension of the tourism industry has potential.

“It’s one thing to have tourists here for a week doing [tourist activities], but when you have people living here, every weekend spending money, even in the off season… that’s a positive thing for Samoa,” Mathilde said.

“I just think it would be good for a few more people to understand that you can do it in the islands.”

When your office is also a café, being extra considerate is essential, the women said.

“You might have someone go to a café, set up their laptop and buy one coffee, take a business call really loudly on the phone, start swearing,” Sophia said.

“I think as long as you remember that you’re supposed to be a patron, you’re not going to run into any problems.”

Sophia switches cafes, choosing the quieter ones in the morning, then leaving before their lunch rush.

But is frequenting café’s all day expensive? Both believe no, not overall.

“If I spend 20 or 30 tala a day in cafes, or more, that’s still cheaper than a daily office shared space in New Zealand, by quite a lot,” said Sophia.

Note: Mathilde Kraft is a house-mate of the reporter, Sapeer Mayron. 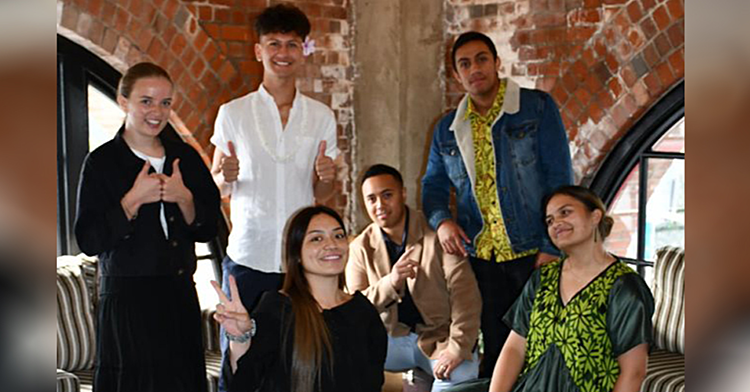 A Samoan who is part of a youth advisory group that works with a New Zealand government ministry giving voice to Pasifika youth is cherishing the opportunity.