Focus on freedom of expression online

National forum on freedom of expression online was the focus of the World Press Freedom Day (W.P.F.D.) in Samoa, organised by U.N.E.S.C.O. and the Journalists Association of (Western) Samoa (J.A.W.S.).

It was part of W.P.F.D. activities held at the Insel Fehmarn Hotel in Tanugamanono.

The theme of the forum this year is “Looking over Internet Risks and Challenges”.

Keynote speaker was Associate Minister of Communication and Information Technology, Lealailepule Rimoni Aiafi, who noted the important role the media plays in any country.

Lealailepule also cautioned over self-regulation on the internet, noting it is vital in this day and age.

“The open nature of internet is beneficial to freedom of expression and access to information; however it comes with many challenges that we are aware of.

“Journalists need to navigate these risks when working online especially when it relates to source confidentiality,” said Lealailepule.

“A critical, independent and investigative press is the lifeblood of any democracy. The press must be free from state interference. It must have the economic strength to stand up to the blandishments of government officials. It must have sufficient independence from vested interests to be bold and inquiring without fear or favour. It must enjoy the protection of the constitution, so that it can protect our rights as citizens.”

“This statement is as true for Samoa or any country in the world as the birthplace of Madiba,” said Nisha.

“Every year, 3 May is a reminder of the fundamental principles of press freedom, an occasion to evaluate press freedom, to defend the media from attacks on their independence and to pay tribute to journalists who have lost their lives in the exercise of their profession.

“It serves as an occasion to inform citizens of violations of press freedom - a reminder that in dozens of countries around the world, publications are censored, fined, suspended and closed down, while journalists, editors and publishers are harassed, attacked, detained, and in some countries, even murdered. We are glad that Samoa is not one of those countries.”

According to Nisha, this year’s global theme is ‘Keeping Power in Check: Media, Justice and The Rule of Law’.

“The theme brings into focus media and the transparency of the political process, the independence and media literacy of the judicial system, and the accountability of state institutions towards the public.

“The theme requires the governments to respect their commitment to press freedom but also demand media professionals to pursue professional ethics.

“In view of the theme, one of the relevant issues much discussed in Samoan media is the issue of reporting on sexual crimes.

“There are also opinions that rape and sexual crime should not be reported by media. Our view is that rape or any form of sexual crime must be recorded and reported and an environment of justice must prevail for the survivor.

“Reporting of sexual violence may break down the social bonds holding families and communities together, but a crime does not cease to exist by non-reporting.

“To combat this crime, the rule of law and the rule of social norms empowering women, girls and anybody affected by sexual crime of any nature must be established.

“Recording and reporting are essential for holding the legal and justice systems accountable for redress. At the same time, media reporting of the sexual crime must be well-informed and balanced. Sensationalised reporting of the cases of sexual violence builds myths and misinformation and further harms the survivors,” said Nisha.

She also encouraged the media to keep to the facts and apply ethical and legal parameters in reporting such cases.

“The objective of such reporting should be to advocate for ending this crime, protecting the rights of the survivors of sexual violence, to enable an environment in which children and women are able to live free, without the fear of sexual assault, or if assaulted, to have the confidence that they would get justice.

“Media must hold itself accountable and ensure that news gathering, reporting and editorial processes are sensitive and helps the survivors right to name and frame their own experiences and use the language that they find most meaningful and representative,” said the U.N.E.S.C.O. Director.

President of the J.A.W.S., Rudy Bartley, noted the media in Samoa and around the world celebrates the fundamental human right to freedom of expression.

“This reflects upon the many challenges press freedom is facing and to develop initiatives to address these challenges on this day.”

He said the open nature of the internet is a benefit to freedom of expression and access to information, but it does have its challenges.

“The negative side of internet is the openness to transmit hate speech, deliberate defamation under the appearance of freedom of speech, sharing and leaking personal information and the spread of fake news.

“These risks cannot be effectively monitored if there is the lack of and under-resourcing of self-regulatory systems by internet intermediaries or other stakeholders with a role to monitor online content.

“Elsewhere it has fueled the growth of legislation and regulation imposing restrictions on freedom of the press,” said Bartley. 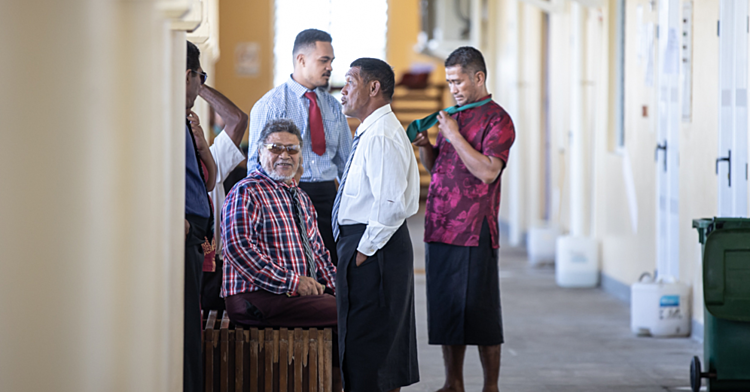