Prime Minister, Tuilaepa Sa’ilele Malielegaoi, has praised a young woman who claims to be carrying the marks of Jesus Christ’s suffering during his crucifixion.

While Tuilaepa admits that no one fully understands such events, he said it is a miracle that should be celebrated.

“We should be happy about these events that it has happened to a daughter of a pastor in Samoa,” Tuilaepa told the media. “If it happens to someone, it means they are holy.

“I’m thankful to the family and the parents for the spiritual upbringing of this girl…in most cases the Catholic church knows best about the events and it happens to mainly preachers, nuns and especially those who are devoted (Christians).”

But Tuilaepa rejected claims that the event could be a warning for a future disaster.

“These events don’t happen because of sins,” he insisted. “Only those who have no faith would feel that way but if it happens to someone, it is a reminder of the life we live in.

“If you did wrong try and improve your ways…the most amazing thing that God did when he created us he gave man a soul so that they will live through to the everlasting life.”

According to Tuilaepa stigmata happens to people and it is known to be miracles.

“This is Christ’s answer to those prayers.”

In September 1918, while hearing confessions, Padre Pio had his first occurrence of the stigmata in locations corresponding to the crucifixion of Jesus Christ.

The “phenomenon” continued for fifty years, until the end of his life. The blood flowing from the stigmata smelled of flowers and often referred to as the odour of sanctity.

Padre Pio’s wounds were examined by many people, including physicians.

His close friend Padre Agostino wrote to him in 1915, asking specific questions, such as when he first experienced visions, whether he had been granted the stigmata, and whether he felt the pains of the Passion of Christ, namely the crowning of thorns and the scourging.

Padre Pio replied that he had been favoured with visions since his novitiate period (1903 to 1904).

He reportedly wrote that although he had been granted the stigmata, he had been so terrified by the phenomenon he begged the Lord to withdraw them.

He did not wish the pain to be removed, only the visible wounds, since at the time he considered them to be an indescribable and almost unbearable humiliation.

The stigmatic died in 1968 at the age of 81. On March 3, 2008, the body of St. Pio was exhumed from his crypt, forty years after his death, so that his remains could be prepared for display. A church statement described the body as being in “fair condition”.

Tuilaepa said the marks never fade and do not infect.

“It (wounds) does not smell of blood but of fragrance and even their corpse are incorruptible.”

The second case that Tuilaepa pointed to is one of a German nun, Therese Neumann.

In March 1926, the first Friday of Lent, Neumann reportedly had wounds appear slightly above her heart but she had kept this a secret.

According to her own testimony, she witnessed the entire Passion of Christ in her visions.

“She consumed no food or water other than the Holy Eucharist from 1926 until her death,” said Tuilaepa.

“She died in 1961 without eating any food or drinking water for 35 years.” 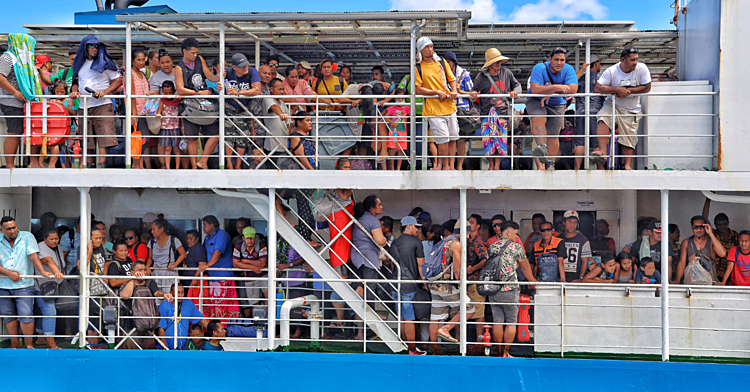 Samoa Shipping Corporation is prepared to assist with the logistics of moving voters to Savai’i if the snap election announced by the Head of State for 21 May goes ahead.

The Samoa Meteorology Division has canceled the heavy rain advisory and the marine advisory.