With majority of the Manu Samoa squad being based overseas, the local players have been working hard to get in top shape before the June test matches.

Jake Grey, who is from the villages of Vailoa-Faleata and Foailalo, Savaii’ is one of five locally based players who made it onto Namulauulu Alama Ieremia’s Manu Samoa squad.

Grey and the boys were enjoying light training this week after a tough fitness and conditioning routine last week. Representing Samoa is an absolute honour, Grey said.

“I grew up here in Samoa,” Mr. Grey said. “I played a lot of rugby as I made my way through school; I played for Apia Middle School and then I played right through middle school and onto Avele; so basically I have been involved with the sport through the ages.”

Like many other young men in Samoa, representing his country has always been a dream.

“I have always wanted to represent Samoa with rugby,” he said. “When I realized that playing rugby was my passion, I decided not to finish school and train very hard so that I may reach that professional level one day.

“My plan was to make a career out of the sport and then play to the best of my ability so that I may one day look after my family with my earnings.

“Family comes first for me so I need to take care of them; secondly I want to look after myself so that I may one day have a good future.”

According to Grey, growing up with supportive parents was something that helped him get to where he is now.

“I currently live in Vaitele-Uta but most of my upbringing was in Vailoa Faleata,” he said.

“I come from a really small family with just one sibling, my older brother; basically I had a normal life, it wasn’t that bad at all. We did struggle at times but my parents did their best to pull through.”

Asked what he loved best aside from rugby, he said food, but not just any food. “I love Samoan food especially oka (raw fish in coconut milk),” he said. “Sadly a lot of the Samoan dishes are very fatty which isn’t good for my training so I’m really picky when it comes to meals.

“I eat a lot of high protein foods and I try to cut down on carbohydrates as much as possible.”

As many may wonder, how does it really feel to wear that blue jersey?

“Representing Samoa is my everything,” Grey said. “Especially with this being my second year of being selected for the Manu Samoa squad; It’s really hard to make the Manu Samoa selections and when you do, it’s even harder to maintain a spot for the next round.

“I am very honored and privileged to have another chance to wear the blue jersey again this year especially with the test matches coming in June.

“It is also a huge honor for my family as I come from a first generation in playing rugby.”

The young Manu was on the verge of having a professional contract but problems came up.

“I was in Ireland for a little while but I had to come back to Samoa,” he said. “The coaches there had faith in me and offered a contract but due to some problems within my family I had to reject it.

“Having a good contract was my chance of getting a better pay so that I could look after my family more.

“But if I am offered a lot of money and I was asked to represent Samoa at the same time then I would definitely choose Samoa.

“My heart is in Samoa and it is worth more to me than money, I grew up here playing rugby and this is where I developed my skills.

“Nothing means more to me than being able to fly the Samoan flag as a rugby player.”

Just like most athletes, family members are always their biggest inspiration and supporters.

“My family has been the biggest supporters of my career right throughout,” Mr. Grey said.

“I want to thank my dad and mom for always inspiring me to go for my dream so that I could make a better life for myself.”

“For those future rugby players; be honest with your trainings and just keep at it,” he said.

“In this life nothing is given to you freely, you have to knock on the door yourself until it opens up.

“The problem with kids nowadays is that they give up before they scratch the surface of their potential, but if they were to keep at it then opportunities will come and rewards will follow.” 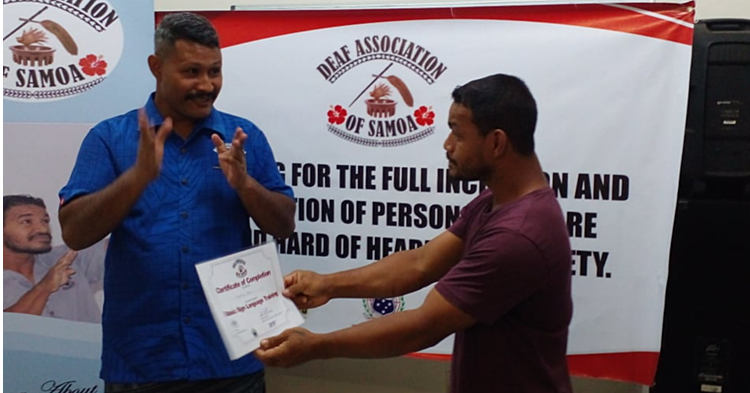