Back in early April when the so-called Mossack Fonseca financial scandal showed up worldwide, the word “Samoa” stood out clear in the unraveling clutter so that everyone here at home who cared enough about one’s country, stopped and took a close look.

No one knew exactly what the fuss was all about and then the news from abroad arrived; it came in the form of a headline in the British newspaper, The Guardian, which said in crystal clear language: “Samoa diplomat was used to help Mossack Fonseca create shell companies!”

Shell companies? What are they?

To answer these questions, it is necessary to know more about the enigma called Mossack Fonseca.

Reliable reports say documents on Mossack Fonseca had been obtained by the German newspaper Süddeutsche Zeitung, and were then shared by the International Consortium of Investigative Journalists that included The Guardian, and other media outlets.

And those documents, by the way, are known as the Panama Papers.

No explanation is given.

Still, this is where the word “Samoa” once again shows up, except that this time, it is not once but twice.

Says one of the reports: “… one email from Mossack Fonseca’s Samoan office, dated 16 April 2013, details the process of sending documents from Samoa to Australia, and then to other destinations.”

Explains another: “We had forwarded on 15 March 2013 to the Samoa high commission a Certificate of Good Standing, for the above company for authentication by the Australian Department of Foreign Affairs, and then to be forwarded to the UAE (United Arab Emirates) embassy for further endorsement.”

Still another: “Mossack Fonseca’s Samoan office appears to have been using the Samoan high commission in Canberra, about 4,500km away, to assist it in forwarding documents for the creation of shell companies to other countries, such as the United Arab Emirates and Uruguay.”

To be sure, at this point, this is pretty intriguing stuff we’re talking about here, and to think that it’s all coming from a secretive source that is known only as the Panama Papers, the image being conjured up in the mind is so rivetingly worrying the idea that Samoa is deeply involved in such a scandal, as it’s unraveling slowly and yet emphatically, is somewhat pretty scary to say the least.

And yet, when Prime Minister Tuilaepa was asked for a comment, all he said was: “I don’t understand it.”

He was silent for a moment, and then he added: “I need to know the context.”

That was in early April, two months have gone by, and yet he has still not told the Samoan public as to whether or not, he had known the context.

Incidentally, attempts at the time to get a comment from the Governor of the Central Bank of Samoa, Maiava Atalina Ainu’u Enari, who is the head of Samoa’s Money Laundering Prevention Authority, were unsuccessful.

Questions sent to her email were not responded to by press time.

Still, in a media statement issued by the Central Bank later, she was quoted as having revealed: “One professional money launderer can move tens, or hundreds of millions of tala out of, or through Samoa, in a matter of minutes.”

She also said: “It is these people we must, and will, shut down to reduce the harm caused to Samoans by money laundering and the crimes that generate laundered funds such as drug crime, corruption, tax evasion, fraud, scams and extortion.”

However, in a separate occasion where she addressed the challenges she believed were being faced by Samoa’s Financial Intelligence Unit (F.I.U.), she made her concern about money laundering clear, saying:

“The Financial Intelligence Unit knows that most entities that will be examined under this operation are doing the right thing, but it is that 1% that are operating outside the law that are on notice.”

In her statement, she pointed out that “money laundering is the process of trying to make illegally-obtained money look like it came from a legal source.”

It reminded: “Money laundering goes on, to a greater or lesser extent, in all countries in the world.

“The work being done by the F.I.U. is to ensure that the protection of Samoa’s financial institutions and systems are absolutely water-tight and adaptable in order to keep up to date with ever changing circumstances in the money laundering arena.

And then on 4 July 2016 – a Saturday, Samoan time – Tuilaepa was in Europe on government business, where he was interviewed by Alex Duval Smith of The Guardian.

Wrote Smith: “(Tuilaepa) defended Samoa’s role as an offshore tax haven, saying it provided revenue for social programmes for young people who might otherwise be exposed to illegal drugs.

“He also claimed the ravages of climate change on his Pacific island nation are making it increasingly reliant on the royalty payments from trustee companies such as Mossack Fonseca, which is at the centre of the Panama Papers.

Tuilaepa reportedly said: “The Samoa International Finance Authority [S.I.F.A.] – which registers companies that do not actually come to Samoa – is very important for financing our youth at sport.

“On top of the increase in the force and frequency of storms, we have a new problem of drugs coming in on boats through our customs.”

Wrote Smith: “The Panama Papers revealed Samoa as a key player in offshore financing. The leaked documents showed that law firm Mossack Fonseca had created more than 5,000 companies in Samoa on behalf of its clients.”

Tuilaepa apparently neither endorsed nor denied that figure. However, he supported S.I.F.A.’s operations saying “they are legal and regulated, and that Samoa is a signatory to ‘three or four’ anti-money laundering protocols.”

Indeed, S.I.F.A. was indispensible, Tuilaepa pointed out, saying: “Without S.I.F.A., we could not finance our participation in the Rugby World Cup.”

Smith wrote that “Tuilaepa was in Brussels to receive a €20.2m E.U. subsidy, to be spent mainly on providing sanitation and clean water for the Samoa’s population of 200,000 people.

“Residents survive mainly on fishing and the remittances of the 300,000-strong diaspora in New Zealand, Australia and the U.S.”

He used his speech to donors and aid organisations attending the European Development Days to call for an “upgraded responsiveness” to the needs of small island developing states in the face of climate change.

“We are often told our projects are too small to be funded. Other times we are blocked by burdensome application and reporting requirements,” he said, adding that economic opportunities are narrowing for countries like Samoa.

“Fisheries and tourism have provided an important development pathway for some, but climate change is rendering these sectors much more vulnerable. One of the worst coral bleaching episodes is currently damaging our reefs, destroying traditional sources of food supply.”

But then “climate has always been the decider of Samoa’s fate. A brief look at @D.M.OSamoa on Twitter reveals the ordinariness of washed-away roads, tsunami threats, earthquake reports, power outages and floods.

“Intervention from the Lord above”, is Tuilaepa’s only explanation for why small island states have not already been wiped off the world map.

And so, what do we say? Did Tuilaepa do well this time out there in Europe?

And now that you’ve bagged another arrow in your quiver Mr Prime Minister, well done and  welcome home! 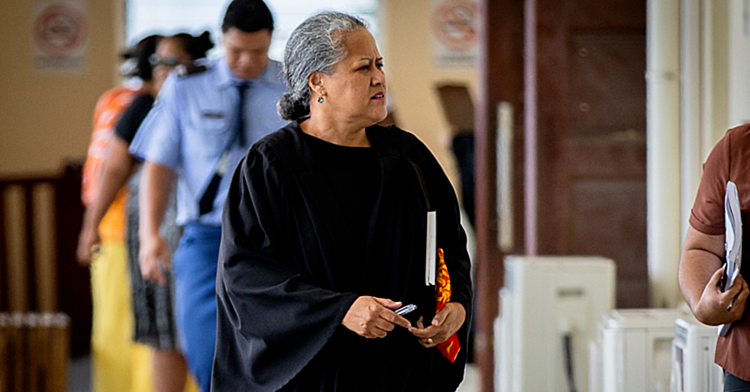