CAPE TOWN, South Africa (AP) — The Crusaders continued their winning start to Super Rugby and ACT Brumbies produced a powerful performance in a 54-17 demolition of the two-time champion Chiefs on Saturday.

The Brumbies rebounded from an opening-round home loss to Melbourne Rebels to beat the Chiefs for the first time since 2014 for a dramatic turnaround in their early-season form.

The Sharks were also impressive to see off the challenge of the Blues 26-7, leaving just three teams with two wins after two rounds: The two-time defending champion Crusaders, the Sharks and the Highlanders, who beat Queensland Reds on Friday.

The Bulls can join them on two from two if they come through against the Jaguares in Argentina in the last game of the round.

There were underwhelming performances on Saturday, too.

The Lions, runners-up the last three seasons, had an early 11-point lead but couldn't put the struggling Stormers away in Cape Town and paid the price, conceding a try and conversion way after the hooter to lose at the death, 19-17.

New South Wales Waratahs escaped with a 31-30 win over whipping boys the Sunwolves of Japan, who have won just six games since joining Super Rugby three years ago.

In New Zealand, the Christchurch-based Crusaders led 24-0 at halftime and weren't seriously troubled to beat the Wellington-based Hurricanes 38-22.

The Crusaders ran in four first-half tries and six in all against the under-strength Hurricanes, who rallied slightly to outscore the Crusaders four tries to two in the second half.

The game was effectively over by the time the Hurricanes scored two of their tries late on, but replacement scrumhalf TJ Perenara's snipe and score against the base of the post for the last try of the game was significant for denying the Crusaders a bonus point.

Hurricanes coach John Plumtree made the decision to rest several of his leading players, including All Blacks flyhalf Beauden Barrett, and the Crusaders, also missing several All Blacks, drew on their greater depth.

The absence of the All Blacks, a feature of the first two rounds, meant a match that is usually one of the marquee contests of the season was played in a half-empty stadium.

Richie Mo'unga and Scott Barrett scored two tries each for the Crusaders.

Five of the Brumbies' eight tries against the Chiefs came in the first half as the Canberra-based team didn't suffer from the absence of Australia loose forward David Pocock, who was concussed last week against the Rebels.

The Chiefs, champions in 2012 and 2013, are winless and bottom of the New Zealand conference.

In Durban, South Africa, the Sharks had already wrapped it up with a solid home display against the Auckland-based Blues when replacement back Curwin Bosch intercepted and went 80 meters for a bonus-point clinching score.

The Stormers were given a lukewarm welcome from their own fans after an embarrassing 40-3 hammering at the hands of the Bulls in the opening round. They appeared off the pace again in a woeful first half and the Lions' 14-6 lead at the break should have been bigger.

The Stormers clawed their way back in the second through the boot of SP Marais and, 17-12 down and with the hooter gone, won a series of penalties near the Lions line.

Eventually, in the 85th minute, replacement scrumhalf Herschel Jantjies reeled away from a scrum and forced his way over, leaving Marais with a conversion in front of the posts to snatch victory.

The Sunwolves scored an early try through Ryoto Nakamura and led the Waratahs of Australia 20-17 before giving up that lead in the second. Still, the Sunwolves closed to within a point in the 72nd-minute through Gerhard van den Heever's second try and missed a last-minute dropped goal from Hayden Parker that might have delivered a rare win. 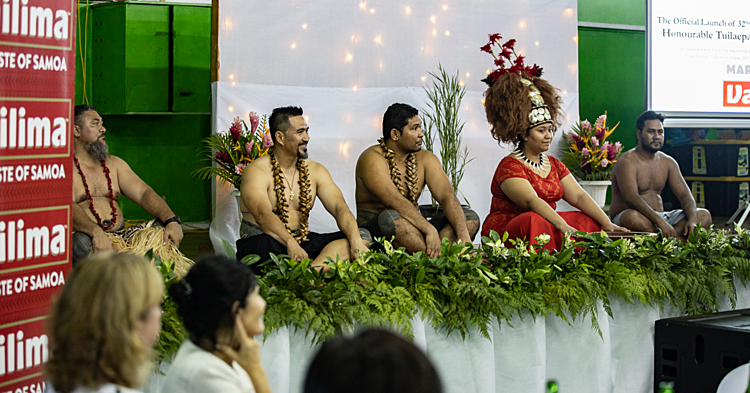 After measles, business as usual for Marist Sevens

The 32nd Vailima Marist International Sevens tournament will see 16 men’s teams and 10 women’s teams compete over the 14th and 15th of February.

A 19-33 loss to Australia means they will play Wales at 6:10 pm Samoan time to try and avoid coming last at a World Rugby Sevens Series tournament for the first time since June 2018.

The Manu 7s defeated Wales 21-7 to restore a little pride, but face a big drop in the standings after their poor weekend on the third leg of the World Rugby Sevens Series.