The man who represents the Samoan custom in the Legislative Assembly and known as the Salelesi when parliament meets, has passed away.

It could not be confirmed what the cause of death was by press time yesterday.

From the village of Salelesi, Letalu has been the Salelesi in the Legislative Assembly since the XII parliamentary term that commenced in 1991 – 1996.

He remained as the Salelesi for the legislative assembly up to this year serving the Assembly for four consecutive parliamentary terms.

Letalu took over from his predecessor the late Asa Seigifili who was the last Salelesi that was also the Sergeant at Arms of parliament.

In parliamentary proceedings, a Salelesi is responsible for making an acknowledgement (taulaga) when the assembly meets to inform everyone that the whole of Samoa - represented by the Members of Parliament, has gathered.

The Salelesi is always seen standing in the middle of the assembly without a shirt making the taulaga before parliament concession begins and before it ends.

In the past, the Salelesi took on the role that is now the Sergeant at Arms.

Part of their duties in the past was to carry the Mace during the Speaker’s procession before the commencement of each parliamentary sitting and place it on the table.

But now the Salelesi focuses on his taulaga while the Sergeant at Arms carries the Mace.

When the Mace is laid on top of the table and not covered, it signifies that the Speaker is presiding in the House and the Assembly may officially conduct its business.

The country’s two political parties are suggesting different solutions to resolving Samoa’s political deadlock and, with the country in uncharted political waters, there is no indication which will succeed. 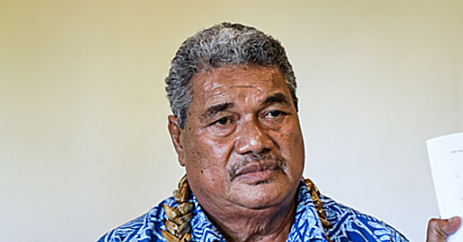 Caretaker Prime Minister Tuilaepa Dr. Sailele Malielegaoi has defended the decision by the Office of the Electoral Commission endorsing the second seat for Alataua Sisifo,