An Elder of the Congregational Christian Church of Samoa (C.C.C.S.) has called on the Government to set up a proportional collective tax to help with developments instead of taxing the priesthood.

Reverend Lale Ieremia makes the call in a letter he submitted for publication in the Samoa Observer.

Rev. Ieremia said he understands the Government is seeking “$2.7 million tala fund to assist with developments.”

As the biggest denomination in Samoa, he suggested that the Congregational Christian Church of Samoa could donate a $1million while the rest of the churches provide the remainder of the balance.

My view is such that the priesthood in Samoa should not be taxed as now ordered by Government and proclaimed by them upon the housetops.

Mr. Afamasaga Tole’afoa Fa’amatala in his view, as published in the 16th of April 2017 issue of this newspaper, says he does not know but wishes the government law on the matter should be obeyed.

I am disappointed with him, however, for being so unclear in his writings. He uses so very difficult English terms and phrases by which he hides his true face. He is a coward.

Such terms he uses as consumption tax, tax avoidance, monetization, driven by globalization, formal economy, opulence that make the church in Samoa stand out like no other, a praise and shame form of worship, con, etc.

It’s a mix-up. One has no hope of knowing if he was talking about the congregation or the faifeau being taxed. Read his article and you will see what I mean.

Toleafoa, why can’t you write as I do? Simple English and Samoan words can aptly serve you. But you choose not but prefer ambiguity and apocalyptic terminology. which serves you well for hiddenness and being mysterious.

I have gone into such length to show you what the term “love” means.

Let me ask you; is the government of Great Britain (England), which champions such qualities as transparency, good governance and accountability, a democracy?

Never, never in a million years! I will tell you again, it is a Monarchy or a Matriarchy where the rich stay rich and the populace stay the same.

I say this for your proclamation of the so-called democracy Westminster is said to be famous for and your being at the forefront of the United Nations promulgation of Universal Human Right.

Our government is seeking means for acquiring a $2.7 million tala fund to assist with its own development. Development of what is not my business.

I, Lale Ieremia, am a Samoan government person; I have always been and forever will be to my grave.

I humbly propose to Government a proportional collective tax to acquire this $2.17 million tala Fund which will be annual.

I know the Congregational Christian Church in Samoa can donate one million tala and perhaps our registered sister churches, the balance. This tax will provide taxation for own dear elderly as well as the yet to be born so that they be granted all the rights due to them by government.

It is a tax provided not only by the faifeaus but by all laity as well. This is Democracy.

Explorer Roggewein termed Samoa the Navigators’ Islands, the Vikings of the Pacific. I’d love to know who the Vikings were and what they were famed for. Someone termed us Paradise.

The tourists say it is the most beautiful country of the world. With its reknown faa-matai, culture and tradition, its natural beauty, I know Samoa is unique. Why has the world described us as so?

It’s God’s ways – ways by which he works his will through history although the Lord of History has no history of his own. His most Holy will is that Samoa makes every effort to make His Name known throughout the world.

Our forefathers were immediately to the task and to the fore when they received the word and told of His Holy Will. Wherever in the Pacific they could sail, they proclaimed God’s name to the heathens and uncivilized.

So many of them now lie buried, some unburied in the highlands of what we now call Papua New Guinea, the Valleys and the rivers of Vanuatu, the Solomons, Gilbert and Ellice Islands, Tokelau and God knows where.

Let us continue the mission, this missionary endeavour of which we are all so familiar in Mathew 28. It is, by the way, the exact meaning of the most misunderstood text in Mathew or in Luke where Jesus gave it to the Pharisees that they give to Caesar what is Caesar’s and to God God’s.

We serve and worship God only because the whole world and universe is His, things we must hand over to God including your life and mine. Hold back and give to Caesar what is due unto him – which I hesitate to say NOTHING. Please Samoa, don’t we ever give God nothing. If government needs money, give it the collective proportional tax they want.

With kind regards and love, 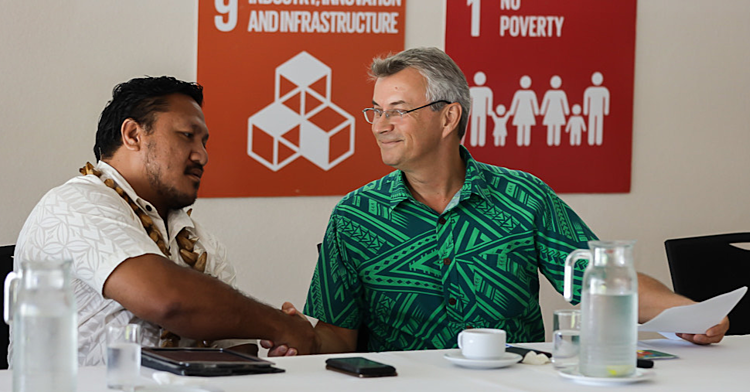