The Head of State, His Highness Tui Atua Tupua Tamasese Efi was a guest of honour at the ‘Aganuu Fa’asamoa 101’ programme, an innovative development funded by Pasifika Futures under the Whānau Ora programme.

His Highness was among 54 Samoans, young and old, in Wellington at the Pacific Islanders’ Presbyterian Church Hall in Porirua two Saturdays ago.

The Aganuu Samoa 101 programme is a step by step guide on culture, history and practise and is taught in English and Samoan.

In his keynote speech, he emphasised the importance of language and culture and the responsibility of parents to teach their children the Samoan language and pass it on to future generations.

“We encourage participants to use the Samoan language at home and teach them how to participate and speak at more formal events such as weddings, community meetings and other ceremonial occasions.”

Among the graduates were sisters’ Fuatino Leaupepetele-Tuala and Analise Leaupepetele, who wowed the crowd with their speech, which illustrated Samoan traditions and culture, covering the honorific terms of salutations for all of Samoa.

“I was really nervous and scared that I might muck up and go all red” says Fuatino.

“We’ve learned so much within a week, and we have to master our lines by putting them in an oratory form of speech.”

“The Samoan language is very poetic and metaphors and subtlety in language makes it very challenging.”

“When it was my turn, and got called up I was really nervous.”

“I’m glad I had my sister there with me and it was comforting to stand close to her and preach to the audience what we’ve learned during the week. It was scary but well worth the experience.”

“There is nothing more rewarding in life than hearing your children speak in my native tongue,” says Galumalemana.

“My wife is Australian and I was born in Samoa and I’ve always wanted to see my children immerse themselves in my Samoan culture.”

“Hearing my daughters deliver their speech brought tears to my eyes.”

“I see the value in these programmes as a very important introductory course for N.Z.-born Samoans who are keen to build their confidence and knowledge of Samoan language and protocols.”

Fuatino says it was a worthwhile experience. “We were honoured speaking the language in high esteem.”

“My daughter Ell-Rose will hopefully one day be able to pick up the language.”

“We’ve learned so much not just about language but now have a full understanding of meaning, history and values behind each Samoan phrase and sentence.”

“I can actually say more than just a simple ‘Talofa Lava’!”

“I highly recommend the course to anyone wanting to learn the Samoan language and culture as it gives a lot of confidence and understanding to know how to speak or respond appropriately on any occasion.”

The Tau family in Porirua also took part in a week long programme.

“It brought tears to my eyes,” says Patricia Tau from Pata, Falelatai. “Seeing my children Ioritana, Tiana and twins Mafutaga and Faaolataga being part of the programme and hearing them speak in oratory form was a proud moment.”

“I couldn’t hold my tears back, listening to them speaking with so much passion and strength to put into action all they have learned in a week.”

“Having heard my children attempting public announcement of gifts in a Samoan way was unimaginable.”

“I can see it’s a worthwhile experience and I will ensure they keep practising at home and take up any opportunities in the community and church.”

Mrs Tau highly recommends the course to other families, in particular NZ-born Samoan children, who are willing to understand Samoan culture and practice.

She says it’s a fantastic programme and it’s a blessing that her children can take part in it, and she still sheds a few tears when she recounts how proud she is as a mother to see her children finally being able to learn what hadn’t been passed on to them.

Mafutaga says having all of them attending the programme is their way of learning and understanding their parent’s heritage.

“We were keen to learn Samoan as much as we could, to speak our parents’ language and to understand the Samoan language and protocols when we are involved in activities at church.”

The Tau family, were among many others benefitted from a week-long programme aimed at Samoans who want to learn more about their identity and culture.

Since its establishment, Aganuu Samoa has graduated more than 1,200 students throughout the region. Many of these graduates are NZ-born Samoans.

There is also planning for renowned Samoan tattooist Su’a Alaiva’a Petelo Suluape to visit Auckland at the end of October to tattoo 30 of Epiphany Pacific Trust’s students, in conjunction with workshops on the history and meaning of the Samoan tattoo. 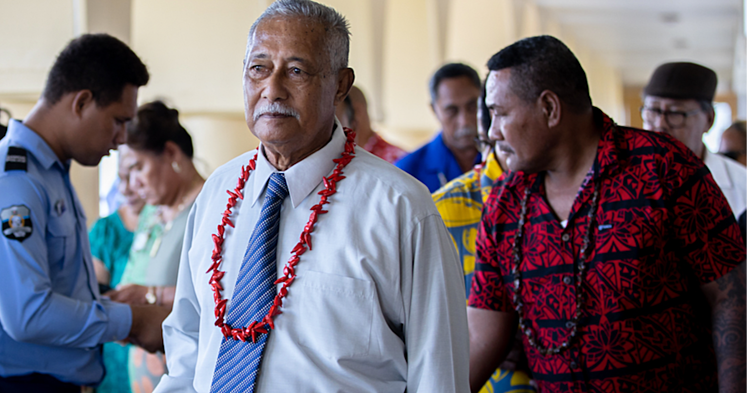