We live in a very interesting time. The truth is that everywhere we look today we see conflicts, hardship, strife and war.

Around the world we’ve become so used to seeing bloodshed, death and the hopelessness which follows. But there is no sign of slowing down either.

The developments between the superpowers of the world are intriguing to say the least. There is not a dull moment with tensions between Russia, the United States and North Korea.

Out there in the Middle East, the escalating conflict in Syria is a constant reminder that peace is an elusive goal, perhaps unachievable looking at what has been unfolding before us.

Here in Samoa, we haven’t been problem free ourselves. Although there are no civil wars and bloody strife visible in most places to speak of, there is no doubt the increase of acts of lawlessness and wanton violence are alarming.

But that’s not all. There are tensions between political leaders, villages and churches. The family unit has been shaken and tested to the point where we are seeing cracks appear that had never been there before.

Judging by some of the stories that have appeared on the pages of this newspaper during the recent past, this is a time unquestionably marked by infamy and shame.

Ironically, we often talk about troubles elsewhere in the world and yet we talk about peace and stability as if they belong to this country.

It’s true to an extent.

But there is also reason to be alarmed.

Today, peace and stability in Samoa appears to be under threat. Whereas family and domestic violence continues unabated, the growing tensions between Police officers and the village of Luatuanu’u is alarming.

During the past few weeks, we’ve followed with interest the exchanges between the parties and no one seems willing to back down. Whereas the Police and their Minister are not willing to give an inch, the village also appears unwilling to compromise.

The worry is that when two pieces of steel blades collide, the flames that flicker from it as a result could hurt someone.

We don’t want that to happen.

Today, we want to remind that wanton violence and threats of all sorts are not the answer.

What’s important is dialogue and mutual respect. That is how we resolve conflicts and problems in Samoa. We are blessed with our very own conflict resolving solutions. Our people are not gifted orators by accident. It is through dialogue and expressing ones opinions and feelings that solutions are found.

And lets not forget the Samoan saying: O lalo lava e saili ai malo. (It is through humility that victory is won).

Today, let’s think about humility and what the Bible teaches us about forgiveness and letting go.

When we stop to consider the root causes of some of our problems, you’ll find we are all responsible one way or another. No one is perfect.

Lastly, let’s be discerning to recognise who the real enemy is who is trying to deceive and create division among families, villages, churches and countries. It is not who you think it is.

Your brother, sister, wife, husband, next door neighbour or whoever is not your enemy. Prime Minister Tuilaepa is not Luatuanu’u’s enemy and vice versa. It is the devil, the father of all deceivers, who is working non stop to try and create division so that all we would feel is anger, hatred and animosity.

Don’t let him steal your joy. 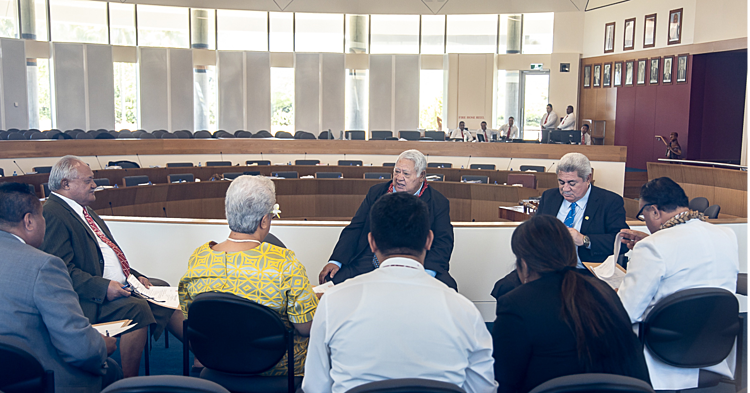