SEOUL, South Korea (AP) — Hundreds of South Koreans took to the streets of Seoul on Tuesday for two separate demonstrations, one to show support for visiting President Donald Trump and the other to voice disapproval of the U.S. leader amid concerns over North Korea's nuclear threats.

Surrounded by thousands of police officers and a tight perimeter created by buses, hundreds of anti-Trump protesters rallied at a boulevard near the U.S. Embassy, holding banners that read "No Trump" and "No War."

The demonstrators accused the outspoken president of raising tensions with North Korea and pressuring Seoul to buy more U.S. weapons. They also criticized him for pressing Seoul to re-do a bilateral free trade deal between the countries so that it's more favorable to the United States.

Across the street, hundreds of Trump supporters waved the U.S. and South Korean flags and held signs that read "Blood Allies Korea + US." They chanted "USA!" when Trump's motorcade passed by the two protest groups for a meeting with South Korean President Moon Jae-in at the presidential Blue House.

More than 15,000 officers will be deployed to provide security during Trump's two-day visit and monitor the demonstrations, according to the National Police Agency.

"We oppose the visit to South Korea by Trump, who has heightened the fears of war on the Korean Peninsula," said one of the protesters, reading from a statement.

The group, which calls itself the "No Trump Coalition," also plans to protest on Wednesday near Seoul's parliament, where Trump is to make a speech calling on the international community to maximize pressure on North Korea.

Pro- and anti-Trump protesters have been staging dueling but peaceful protests in Seoul in recent weeks ahead of Trump's visit, reflecting a public deeply divided along ideological and generational lines.

Many South Koreans are concerned that Trump's fiery rhetoric on North Korea, which has included threats of military options, is raising the risk of an unwanted war on the Korean Peninsula that could cost thousands of South Korean lives.

Others, including older people who tend to be more conservative, are supportive of Trump's tough stance against the North, which has been accelerating its nuclear weapons and missile tests in recent months, and accuse liberal South Korean President Moon of being too soft on Pyongyang.

South Korea is known for its vibrant, and occasionally violent, protest culture that sometimes results in significant political changes. Massive but peaceful street protests by millions drove lawmakers to impeach then-President Park Geun-hye over a corruption scandal in December. Park was formally removed from office and arrested in March over charges including bribery and extortion.

The conservative Korea Freedom Federation released a statement welcoming Trump's visit, which it described as a "God-like move" that would "instantly reverse" the security situation on the peninsula after the allies had been forced to the "defensive" by North Korea's weapons tests.

However, the group also lamented Trump's decision not to visit the heavily guarded demilitarized zone between the Koreas during his visit to the South, saying that it might lead North Korea to misjudge that its provocations have hurt the allies' morale.

Meanwhile, in the Philippines, dozens of protesters burned a portrait of Trump in downtown Manila on Tuesday, saying the president, who will join a summit of East Asian leaders next week in the country, is not welcome there. Members of Kadamay, an alliance of urban poor activists, camped out at a bridge near the presidential palace and chanted "Ban Trump in the Philippines!"

Tens of thousands evacuated as India braces for cyclone

Tens of thousands evacuated as India braces for cyclone 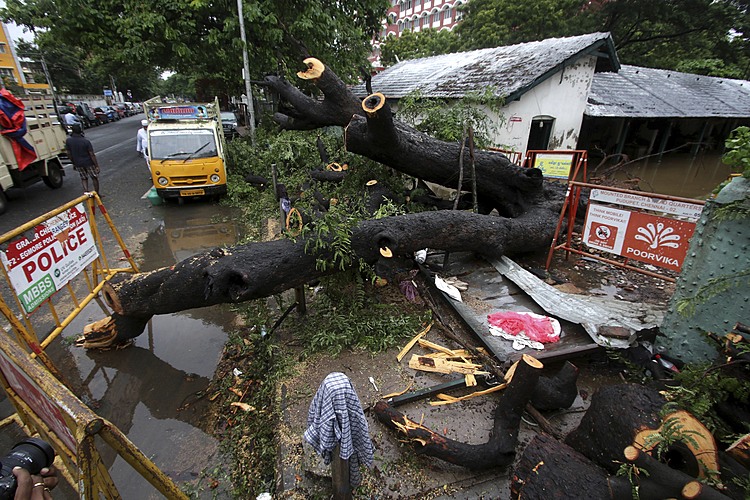