A landslide on the East Coast of Upolu interrupted traffic yesterday morning.

The landslide occurred between the villages of Lauli’i and Luatuanu’u.

“When we were (him and his wife) heading back home (at Afulilo) after our family fa’alavelave at Si’usega, there were only two vehicles behind us,” Tuia said.

“That’s about nine or past nine last night (yesterday), so when we got closer to where the landslide happened, my wife told me to turn down the radio because she heard an unusual sound (gogolo) from the sea.

“Then we stopped our car and the other cars behind did the same thing, we were looking out to the sea thinking the sound came from the sea.

“I was a bit worried as well because I heard the sound too. I thought it’s another tsunami because the sound was getting closer to where we parked.

“But to our surprise, two meters from where we stopped, two large stones fell right in front of us followed by huge trees and mud. It lasted two minutes.

“All the vehicles, including ours reversed and parked far from where the incident occured.”

Tuia said when the landslide stopped; they still heard a strange sound from the mountains.

“So we waited patiently until the sound finished and I think it lasted for about 15 minutes.

“We should be careful every time we travel in mountainous areas, especially during this rainy season and also be aware that weather patterns changes all the time.”

He believes the media plays a significant role in relaying the message to the public and the public need to heed any advice given out by the various media outlets.

“I know if the slides hit the three vehicles including ours, something might happe but thank God for us all the time.”

This is not the first time the country has witnessed landslide in the country.

Last January, a landslide occurred between the villages of Luatuanu’u and Solosolo.

The Disaster Management Officer reminds the public during this time to be cautious when travelling along the road. 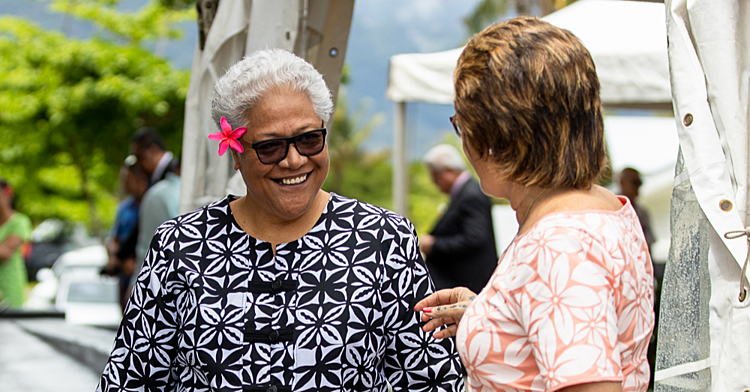